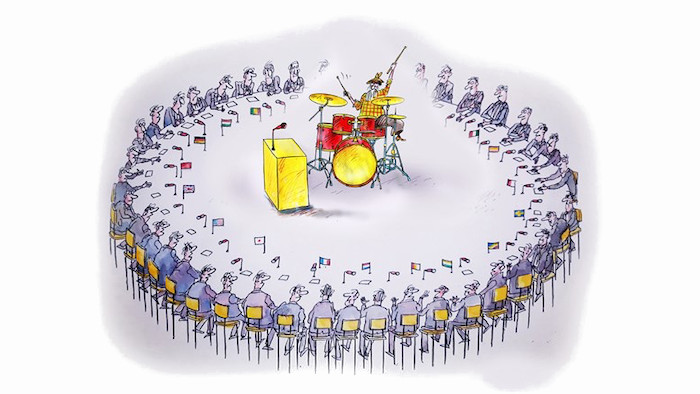 A democratic and civic opportunity we cannot afford to miss

With the departure of Britain, the European Union’s standing in the eyes of the world appears more vulnerable than ever. The Conference on the future of Europe is an opportunity that cannot be wasted by ignoring the power of civil society.

While the causes of Brexit are many, it emerged from a democratic malaise which has potentially disastrous consequences for the EU. A gap in legitimacy appears to be growing between traditional representative democracy and a more participatory form of democracy. For citizens who want more involvement than merely electing their representatives, participatory democracy seems the key to bridging the gap.

The Conference on the Future of Europe, which will begin in May 2020, three months after Brexit, represents a major opportunity for a democratic and civic renewal of Europe.

We are convinced that civil society representatives and citizens must be allowed to take full advantage of the Conference, so that they can develop a shared vision of the European Union for 2030-2040 and prepare a dynamic future for the continent.
Our greatest fear is that the consultations forming part of the Conference will prove mere lip service to the popular mood. If we flatter people's hopes of participation, those hopes had better be fulfilled, because any disappointment will be all the greater, and our European democracy will be even weaker as a result.

The recent European Parliament resolution outlining the modalities of the Conference confirms the promise of inclusion announced by Ursula von der Leyen in her programme for Europe. We welcome this. It also demonstrates that the Parliament is the European institution most committed to giving a role to citizens. The precise objective established in the resolution is to "favour a bottom-up approach so as to engage in direct dialogue with citizens in a constructive manner", along with a long-term plan for a "permanent mechanism for engaging with the citizens in contemplating the future of Europe".

In concrete terms, the Parliament proposes a "listening phase" prior to the Conference, where citizens can set out their own vision of Europe. This stage is undoubtedly essential. It allows citizens to be involved in setting the agenda, and could serve as a basis for the six thematic conferences ("citizens' agoras") which have also been proposed.
To this the Parliament may add two "youth" agoras, even if one may wonder why citizens between 16 and 25 are gathered separately, when citizen representation requires unity.

It is still unknown to what extent, and in what way, the outcome of these forums will be taken seriously by the institutions.

We understand that it is difficult for the Parliament alone to decide the rules of the game. However, we also know that ambiguity and restraint are ill-advised when so many citizens and civil society actors continue to proclaim their desire to be more involved in European democracy.

Since its foundation, the issues of transnational citizen engagement and European public opinion have formed the core of CIVICO Europa’s thought and action. In the immediate aftermath of the Brexit referendum we called for a European Renaissance, centred around the Appeal of 9 May 2016, from which emerged a roadmap outlining an agenda for Europe. In this roadmap we urged the exploration of new methods of citizen engagement.

Just before the May 2019 European elections, we moved from words to deeds. With the help of civic tech organisation make.org, we designed and implemented the WeEuropeans project, the largest transnational and multilingual consultation ever realised. The citizens' congress held on 22 March 2019 in the European Parliament provided an opportunity to present the results of the consultation to European civil society and the leaders of the Parliament's main political groups, who then partially or totally integrated these proposals into their electoral programmes.

While the focus on environmental issues surprised many, the subject has subsequently climbed to the top of the European agenda. This clearly proves the effectiveness of this kind of consultation mechanism: popular concerns are brought to a level where empty promises will no longer suffice.

While we still believe deeply in representative democracy, these experiences have forged our conviction that, alongside the institutional leadership of the Member States, the Parliament and the European commission, citizen leadership is indispensable. The latter is not intended to replace political leadership, but to complement it. Civic leadership must serve as a spur to stimulate and guide political leadership. It must inspire political audacity, and move beyond national interests by genuinely enriching the European representative mechanism. It must also avoid the trap of “civic washing”.

A great deal of work has already been done on the issue of citizen participation. The collective reflection taking place before the launch of the Conference must draw on this experience.

Likewise, digital platforms are already up and running, making it possible to organise large-scale consultations and create public spaces for discussion and debate. These platforms can help foster European public opinion and ensure that this opinion is heard.

We are not proposing some kind of pseudo "digital democracy" here, where the arbitrary nature of the platform determines the outcome. The media must also be involved in the Conference, because there is no democracy without an independent press – and a reliable, independent European media is the necessary link between the digital and the democratic. More than ever before, it is time for serious reflection on European media sovereignty.

We call on the Conference to build on these ideas and experiences, and to seize the opportunity to work with civil society on the reform and renewal of the European project.

Categories
Conference on the future of EuropePolitics and democracyEuropeEurope