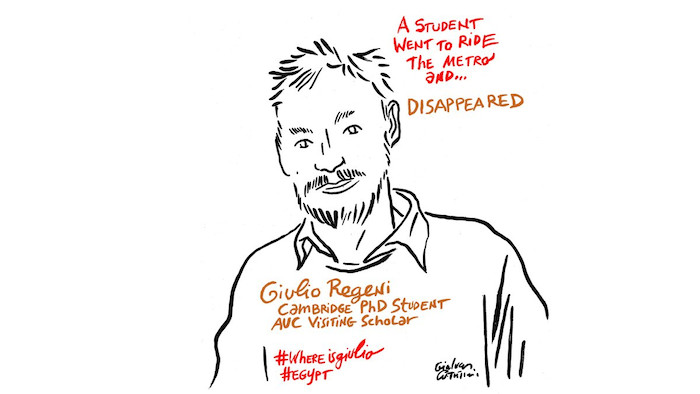 A European battle for truth and justice

Four years after the death of the young Italian researcher, EuropaNow! asks European cities to demand that the Egyptian government explain the circumstances around his brutal murder.

Four years have passed since the young researcher Giulio Regeni was abducted in Cairo, before being tortured and murdered, his body left in a ditch along a highway. Since then, despite tireless efforts, Italian judges investigating the incident have been hitting their heads against the wall erected by the Abdel Fattah Al-Sisi regime. The Egyptian president has tried to divert and obstruct the investigation with a bewildering array of tactics, including falsely accusing five innocent people of the crime and having them killed.

The Italian authorities have repeatedly demanded that Cairo account for the case, with varying degrees of intensity. There is yet to be a breakthrough, however. With every passing month, the hope of identifying and sentencing those responsible seems more and more futile. At the end of last year, the Italian judiciary presented the conclusions of its investigation to parliament. Most importantly, it was declared that Regeni's murder was a state murder. Unfortunately, Italy has been abandoned by the international community. In May 2016, the British government called for "a transparent inquiry to address the international community's concerns about the security of foreigners in Egypt", but nothing more.

A few weeks earlier, during an official trip to Cairo, French president François Hollande raised the issue of human rights in Egypt, with specific reference to the Regeni case and that of Eric Lang, a French teacher beaten to death in a police station. However, Hollande was also quick to insist that the economic and military "special relationship" with president Abdel Fattah al Sisi was not in question. Since then, the issue has disappeared from the political and diplomatic agendas of European leaders, sacrificed on the altar of trade relations and Egypt's self-declared "stability".

In fact, European partners should have been helping Italian efforts since 2016, as Giulio Regeni's parents themselves requested in the European Parliament. European leaders should have recalled ambassadors in Egypt, sending the message that the Regeni case concerns the whole European Union, not just Italy, because Giulio Regeni was first and foremost a European citizen. It is easy to imagine a different attitude from Egyptian authorities, if such action had been undertaken.

Urged on by the 28 member states’ collective, determined demand for truth, Egypt would have to be more cooperative. Instead, as we know only too well, the situation has developed in a much different direction. Receiving no support from the other EU member states, in August 2017 the Gentiloni government sent a new ambassador to Cairo, inevitably implying that the bilateral relationship between the two nations would no longer be affected by the Regeni case.

Thus, Europe has missed an opportunity to show solidarity with Italy. It has also undermined its very purpose. Demanding justice for the young researcher from Friuli would have meant saying that the European Union is not only built on solidarity in the face of the 21st century’s challenges and the new world powers, but that it is also built, first and foremost, on the common principles of freedom and respect for human rights. The EU is not a shareholders' pact. It is a political union rooted in the memory of the tragedies of the 20th century (the two world wars, and the fight against totalitarianism), and the will to overcome them.

That is why, today, it is up to all European citizens to mobilise and demand that their national and European representatives make their cohesive, insistent and determined voice heard in Cairo. Every head of state or government, every minister or EU delegate, whether visiting Egypt or receiving an Egyptian representative, should be urged by the public and European media to ask, repeatedly and firmly, for the truth about the Giulio Regeni case. Such mobilisation will inevitably be long and difficult, but Giulio Regeni, and Europeans themselves, deserve and demand such commitment.

Along with Amnesty International, the EuropaNow! association is going to take up the cause. The desire to explain the disappearance of Giulio Regeni also entails reaffirming our support, as European citizens, for all the Egyptian citizens who work courageously for the truth and face regular threats from authorities. More generally, it is essential that we send a message of vigilance and solidarity to Egyptian democrats who firmly believe that human rights are universal, that there are no regions in the world where fundamental freedoms can be neglected, where the kidnapping, torture and murder of a researcher can go unpunished.

On January 25, the anniversary of Giulio Regeni’s abduction, we invite European cities to hang banners and signs of support, in any language, demanding "Truth and Justice for Giulio Regeni". EuropaNow! will be sharing photos of these demonstrations on social media.