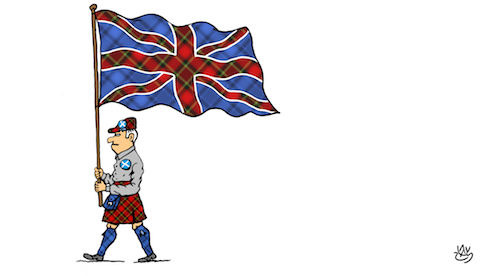 Should symbolism be taking over economic and civil needs? Certainly not! I grew up in the post-Prague Spring’s Czechoslovakia (I was 19 years old when it broke up), and I find it disconcerting that the “YES camp” refers to the dissolution of Czechoslovakia (in 1993) as a successful role model.

Soon after the “divorce euphoria” passed (more on the Slovakian side since Czechs largely perceived the new state – the Czech Republic – as a remained state), Czechs and Slovaks began searching (either bilaterally or through the EU integration) for re-integration in a number of areas; from economy, military cooperation and foreign policy, to science, show business and sport; all that in the name of greater competitiveness, efficacy or attractiveness. Therefore the claim for Scottish independence appears to my nostalgic “Czechoslovakian” sentiment as a 19th century solution for a 21st century problems; archaic, wasteful and deluding.

Scotland, no doubt, could be successful as an independent country, but at what cost? The Salmon plan of the Scottish monetary union with the remainder UK epitomizes the contradictory nature of “YES camp”. Of course, an independent Scotland would be able to use the pound as its single currency, only it would have no control over it. This “YES camp” assertion resembles European integration, but in an upside-down logic.

Due to the Euro crisis, Europeans came to realize that a monetary union without a political one is a very ailing project. Alex Salmond just recently came to believe that this is what the Scots need? He asks for a mandate to negotiate independence while promising monetary and quasi-political union with the remainder of the UK. What a brilliant performance in incoherency.

Moreover, there is the issue of foreign and security policy. Firstly, Scottish primary interest (no matter whether Scotland is in or out of the UK) is to keep the UK in the EU. I contend that the chance of doing this is much greater by being part of British politics rather than just being a part of EU politics. Secondly, I doubt that it is convenient for Scots to be one of the European dwarf countries (the size of Slovakia) and therefore being dependent on building ad hoc coalitions with other European countries. It is more convenient to play an exclusive role within a heavy weight county and to assert Scottish national interests through the lever of a dominant and leading position by being part of the UK within the EU.

The quality of the public discourse would also appear to be a problem. The political scope and ambitions of a government without doubt determines the quality of public discourse from media to education. An independent Scotland would not be able to cover such a large scope of issues and problems which it does now, without support of the BBC.

It would inevitably be destined to move from being part of a public discourse with the global range to a much more selective and parochial public arena; unless Scotland re-integrates with the remainder of the UK, so why go independent in the first place? Smaller media markets struggle everywhere to protect the critical public and political discourse as a vital public asset than larger media markets.

There is also a great “identity paradox” in the “YES camp” reasoning. Scottish independence is an idea based upon an implicit assumption of Scottish national and ethnic uniqueness which is believed to be incompatible with the British identity and at the same time being an integral part of Europe. European integration is invoking composite collective identities which are based upon inclusiveness and complementarities, so identifying itself against the composite political identity of the UK Scotland doesn’t resonate with the “EU identity project” very well at all. Rather the opposite. Promoting Scottish independence through the flag of “Scotland in Europe” and pushing for a political and national separation at the same time seems to be a deed of non-Europeanness par excellence.

If Europeans want to maintain their welfare, their liberties and democracy in Europe, they have to strengthen cognitive aspects of various European cultures within the single European public sphere and at the same time to alleviating a polarizing symbolic meanings and sentiments. The divorce of Czechs and Slovaks and the dissolution of Czechoslovakia was a disturbing loss-loss occurrence.

It emphasized the dominance of symbolic cultural aspects over aspects of moral and cognitive nature and the prevalence of national sentiments over real social, economic and civil needs. The fact that many people feel winners after all that makes it even more disheartening. I hope Scots do not go that way.