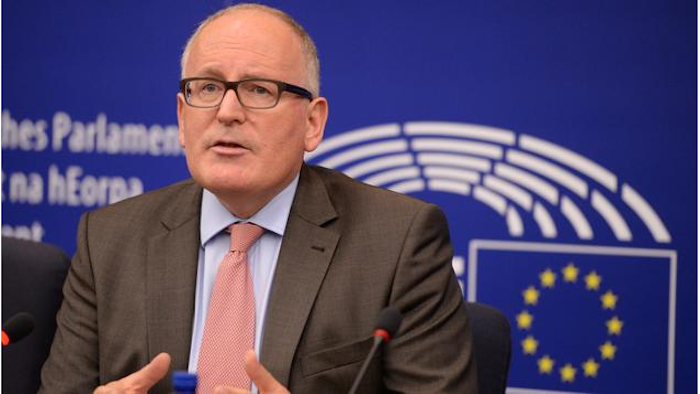 Commissioner Frans Timmermans will in the future let unelected technocrats decide whether and how the Parliament should amend laws, but Europe needs more democracy, not less. A comment by Harald Schumann on the Tagesspiegel.

The plan looks harmless at a glance. Laws in Europe should be "better", said Frans Timmermans, first Vice-President of the European Commission. Therefore "more transparency and control" are needed in the future when the EU adopts new laws, vows the Commissioner. The European Parliament and the Council of EU governments should also commit contractually to subdue all legislative changes to a "rigorous" examination before voting on them, demands Timmermans, who presented a contract draft.

That sounds plausible - and yet is grossly misleading, because his melodious words hide in Orwellian fashion the opposite intention. The Commissioner and his boss, President Jean-Claude Juncker, want to shield European legislation from the influence of citizens and parliaments, and let instead unelected technocrats decide what should be regulated and what shouldn't.

Their instrument is a new "committee on regulatory control", whose six members will "autonomously" perform an "impact assessment". Before that the authority, which will have the exclusive right to propose EU legislation, will determine the costs and benefits to companies and citizens of each proposal. Results will be controversial, though, as costs and benefits can't be measured objectively with regard to environmental or health regulation. The legislators, i.e. the European Parliament and the delegates of national governments in the Council, often took different views.

That's the extent to which Juncker and Timmermans intend to curb democracy in the future. According to their plan even parliamentarians and councilors will have to subject their changes to the commissioners' drafts to an impact assessment before they dare convert their will into laws.

All this is supposed to protect European businesses and citizens from unnecessary "administrative expenses", but in fact the supposed citizen friends are creating an additional bureaucratic body with which they mean to protect European companies from the obligation to better protect workers, public health and the environment. That was the actual outcome of the previous commission's program aimed at "cutting red tape". It left behind a framework law for the protection of soils, European rules on maternity leave, stricter rules for the approval of drugs and the establishment of an EU Agency for Safety and Health at Work, all unaccomplished.

Timmermans' plan would further exacerbate this trend, because to make matters worse three of the six members of the Supervisory Committee will be appointed from outside. Whenever Europe's central authorities hired such external advisors the commissioners put the fox in charge of the henhouse and in each case summoned experts who were close to the companies concerned. Juncker's team even manned their body to combat tax evasion with a majority of experts from companies mired in organized tax evasion, including representatives of the banks HSBC and Barclays and of the audit group KPMG, which played a central role in tax scandals in Switzerland and Luxembourg.

Gradually, Europe gets deeper and deeper into the "post-democracy" state against which the British political scientist Colin Crouch warned us ten years ago. As legislation has moved to a transnational sphere that escapes public control, democracy loses its substance and citizens turn away. "People who actually only reject the current EU policy are forced to turn against the EU system as a whole," says European expert and political consultant Ulrike Guérot - a circumstance that increasingly takes them to vote for parties relapsing into nationalism, like France's Front National.

If the EU parliament or at least its pro-European majority take themselves seriously, they should reject Timmermans' plan altogether and call for the exact opposite, a reform facilitating European citizens' initiatives and finally allowing referendums. The EU needs more democracy, not less. Otherwise its days are numbered.