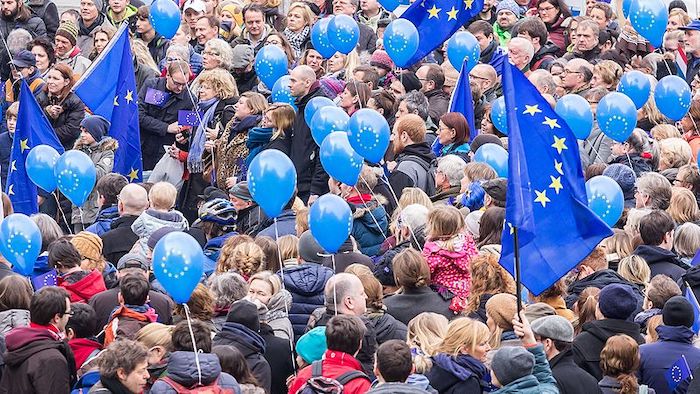 Launched by the Civico Europa platform, We Europeans aims at consulting over 100 million European citizens and ask for their proposals for "concretely reinvent Europe".

Raimond Spekking |  A Pulse of Europe demonstration in Cologne (Germany), on 19 February 2017.

“We Europeans” is “a civic and non-partisan campaign for mobilisation and reappropriation of the European project by citizens of all the EU member-states. Launched on 4 February 2019 by the civic movement Civico Europa with the help of civic tech organisation Make.org, “WeEuropeans” involves a citizen’s consultation of more than 100 million Europeans via social networks.

“Europe is at a crossroads”, say the organisers: “Nowadays, Europeans feel distant both from their political
leaders and the European Union. Citizens must be put back at the very centre of European
democracy.” With this unprecedented operation, they aim at “concretely reinvent Europe” by holding a vote on the proposals most pertinent to this ambition. After simultaneous consultations taking place in every EU country, “every European citizen will be able to vote from among the most popular proposals of the first round.” The consultation will last until 15 March.
Beginning on the 22nd of March, WeEuropeans will spread the Citizens’ Agenda throughout the EU so that the European political and civil society “can take up the cause.” During two months, WeEuropeans will call on civil society and political actors to “focus the debate on Europeans’ concerns.”

According to organisers, “the consultation will allow all citizens to make their voice heard by sharing proposals on how to reinvent Europe and vote on proposals by their fellow citizens”. The 10 proposals with the largest approval “will constitute a Citizens’ Agenda”, which will be presented by citizens themselves to the European political and civil society actors of every country, at the European Parliament on the 22nd of March. By this May’s EU elections, WeEuropeans “will spread the Citizens’ Agenda throughout the EU” so that “main political actors can take it up and make a public stand.”