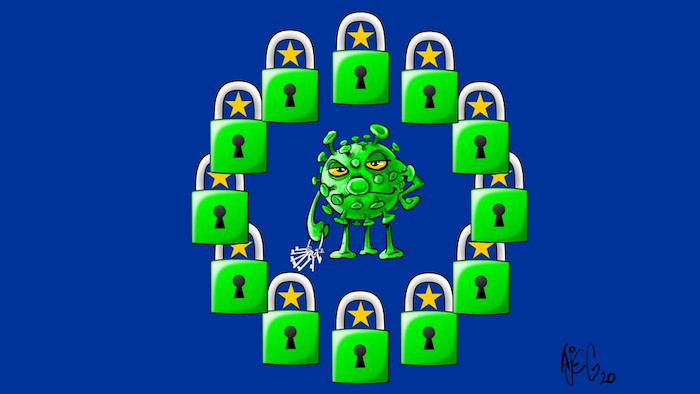 Every government for itself

Besides its devastating impact on human health and the global economy, the coronavirus epidemic is also a live-action, real-time test of European member states’ capacity for coordination, at a time when intergovernmentalism prevails, lament three Belgium-based academics.

While the European Union has certain instruments at its disposal for managing cross-border epidemics, these instruments remain rudimentary. Thus, the European institutions cannot just adopt and apply uniform measures across the EU—far from it. Managing healthcare systems, as well as the economic and social consequences of the epidemic, remains entirely in the hands of each member state. The Commission has tried taking the initiative by creating a “corona response team”, and an investment fund to alleviate the economic effects of the epidemic. These actions have not drawn much attention, failing to convince those who continue to ask “what is Europe doing?”
With regard to the epidemic, European member states are certainly sovereign in their lack of coordination. Like a pavlovian reflex, in the absence of any supranational procedures, governments fall back on national strategy and enact measures without consulting their neighbours. While some were punctually closing their borders, others merely advised not travelling abroad. As some nations closed schools, crèches, restaurants and cafés, others imposed a quasi-lockdown.
From Bucharest to Brussels, the public has listened intently to the speeches and declarations of European leaders – Macron and Merkel in particular – and witnessing once again the spectacle of member states acting unilaterally in the face of an unprecedented crisis. The absence of coordination and solidarity between European member states leads to situations which range from the ridiculous to the dramatic. Italy is left to fend for itself, after a call for help apparently heard only by China.

The only measure European leaders could agree upon is the suspension of free movement between member states. This measure doesn’t make much sense, since the sites of contagion are regional rather than national. The measure could even prove counterproductive, by mobilising financial and security resources which may be needed elsewhere, and by giving rise to social interactions that should be avoided. Worse, the Netherlands and Sweden seem to have adopted the same Darwinian strategy as the British. By letting the least vulnerable become infected, the idea is to reach “herd immunity”, even if that means a greater number of deaths. This obviously controversial strategy is intended, above all, to avoid economic standstill.
For a long time now, politicians and experts have argued that the added value of the European Union, as well as its legitimacy, depends on its capacity to find common, fast and effective solutions for problems which member states would not be able to resolve on their own. The 27-state intergovernmentalism we have today is clearly incapable of generating the “de facto solidarity” evoked by Schuman in 1950.

As more and more voters turn away from traditional parties, seduced by simplistic and reactionary rhetoric, European leaders have apparently failed to learn any lessons from the last decade’s crises. For better or worse, the Commission and the European Central Bank admit their powerlessness in the face of member states who prefer to play the national sovereignty card rather than that of European cooperation.

As became clear during the migrant crisis, the “every man for himself” approach has disastrous consequences. Unsurprisingly, ten years of recession and cuts to public services have left healthcare systems drained and unprepared for such an epidemic. The dire shortage of resources for front-line health workers will undoubtedly have serious consequences.
These choices and their consequences are a testament to the empty rhetoric of those who denounce a federal, supranational, sovereignty-castrating Europe, and invoke a Europe of newly sovereign states, cooperating on “projects which work, like Airbus”. Lacking effective procedures, lacking common financial resources, lacking leaders with a sense of collective responsibility, intergovernmental Europe is a malfunctioning Europe.
This was a sorely missed opportunity to demonstrate intra-European solidarity and restore the EU’s image by putting everything in place to save the lives of those in countries affected by Covid-19, or those at the borders, fleeing poverty and war.

We demand a coordinated response to the COVID-19 emergency now

We gladly relay this petition by our friends from The Good Lobby for a real coordination of the actions of the EU Member States to face the coronavirus pandemic:

COVID-19 has no borders. If Italy, Spain and France are among the most affected countries, the virus is spreading fast. No country can get out of this emergency alone.

However, there is no common strategy to contain such a health emergency. Italian, Spanish, French are confined to their homes and limited in the exercise of their personal freedoms in an attempt at saving lives. As time passes, many more will soon find themselves affected in this unprecedented compression of personal freedom in liberal democracies.

This the closest experience to war ever lived by the vast majority of us, European citizens. While there are no bombs, thousands of citizens in intensive care are victims and health professionals are under the enormous pressure of long shifts and the fear of falling ill.

To blame the European Union is easy, but it doesn’t get us anywhere. The European Institutions cannot close schools, cancel football games or lockdown our cities. They are not entitled to. However, given the emergency situation we all find ourselves in, we can no longer limit ourselves to saying that the EU has no competence in health matters and, therefore, cannot act.

If the European Union cannot act alone, nothing forbids the Health Ministers of all EU Member States to pool their sovereign emergency powers. They could start coordinating their health response, by taking a common line on testing, containment, quarantine, social distancing and research on potential vaccines and medications.

It would be a key step forward, not only for the efficacy of the measures taken but also for the acceptability of measures that often foresee the extreme limitation of our personal freedoms to reduce the risk of contagion and protect the health of every and each European citizen.

In the absence of a European coordination, we see unilateral actions, like the decision of Germany to close its borders. Although border restrictions do not entail any major health gain – but rather slow the free movement of workers and good needed in an emergency –, they respond to the inability of the Union and its member states to devise a coordinated action preventing those cross-border movements from happening. A EU-wide coordinated health response to COVID19 would render border controls unnecessary.

Join us in asking the EU 27 Health Ministers to exercise together their emergency sovereign powers, so as to closely coordinate their sanitary response, adopt common positions on testing, containments, quarantine, social distancing and medical research. Once the emergency will be over, we ask our national political leaders to pursue a transnational approach as the only one capable of dealing with viruses that do not know borders. It is high time to permanently entrust the European Union with real competences in the field of public health, especially in emergency situations.