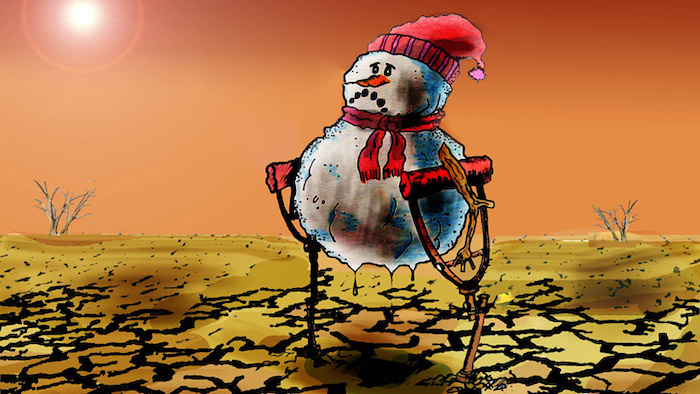 President Macron wants the EU to be climate neutral by 2050. Chancellor Merkel agrees, in theory, but the question is how to reach that goal. Can an EU guideline on net-zero carbon emissions finally spark action to reduce greenhouse gases?

At the Petersberg Climate Dialogue, held in Berlin in mid-May, German Chancellor Angela Merkel once again took the opportunity to applaud the worldwide student protests against climate change. She sounded a warning against the direct and indirect effects of global warming, which will cost national economies dearly: Extreme weather events, famine, political instability, migration. She gave her newly founded Climate Cabinet the task of finding a way for Germany to become climate neutral by 2050.

Once the details have been clarified, the next step would be to join the initiative of French President Emmanuel Macron and seven other EU countries who are pushing for a climate-neutral Europe by 2050. Germany's new Climate Cabinet consists of leaders of the ruling Grand Coalition. Alongside the Chancellor herself, it includes Finance Minister Olaf Scholz, SPD leader Andrea Nahles, CDU leader Annegret Kramp-Karrenbauer, CSU leader Markus Söder, Union faction leader Ralph Brinkhaus, CSU regional group leader Alexander Dobrindt and Chancellery minister Helge Braun. The group sounds less like a climate rescue task force, and more like a new forum to extend bitter intra-coalition disputes.

At the same time, right now, it is essential that we finally move from talking to acting. However, there are scant indications that politicians have done their homework when it comes to climate policy. In its Sustainable Governance Indicators (SGI) project, the Bertelsmann Stiftung compares the sustainability of policy-making, including environmental policy, within OECD and EU countries. It shows that even by 2015, some 18 industrialized countries had failed to fulfill obligations made under the Kyoto Protocol, including nations as large as Australia, Japan, the United States and Canada.

Let us remember that the latter two withdrew from the Kyoto Protocol in 2001 and 2011 respectively. The reduction targets set out in the Kyoto Protocol should have been fulfilled by the signatory states by 2012. But even the countries with top marks in the SGI ranking for their commitment to multilateral and regional environmental agreements, such as Norway, Luxembourg and Switzerland, failed to meet their Kyoto targets by 2015. While the SGI survey has a large group of industrialized countries scoring high for their participation in multilateral environmental agreements, there is a complete absence of top-performers when it comes to the implementation of the Kyoto targets. In this area, these countries rank, at best, in the middle of the field and, more often than not, they score poorly or even number among the overall worst performers. The data convincingly underscore what the young people accuse politicians of: There is too much talk and negotiation – and far too little implementation.

The situation is even gloomier for the much more ambitious and legally binding climate protection targets of the Paris Agreement, which the signatory states must implement by 2030. With a further drastic reduction in greenhouse gas emissions, especially in the industrialized countries, and the radical expansion of renewable energy sources, they aim to limit global warming to 1.5 degrees Celsius by the year 2100 compared with the level before the start of industrialization. The Climate Change Index 2019, published by Germanwatch, CAN International and the NewClimate Institute, which measures the progress made by industrialized countries towards implementing the Paris Agreement, states that no country is currently fulfilling the commitments made in the agreement.

The German Federal Government's most recent climate protection report also admits to a clear gap between reality and the milestones set for greenhouse-gas reduction. In particular, richer nations appear to be increasingly relying on buying emission rights from countries that exceed their targets in order to buy themselves off the obligations of the Paris Accord. This calculation will never work out.

Responding to global school protests, the UN Secretary-General António Guterres wrote in an article for the Guardian in March 2019: "My generation has failed to respond properly to the dramatic challenge of climate change. This is deeply felt by young people. No wonder they are angry." At a UN summit in September 2019, he therefore wants to persuade the heads of state and government to commit themselves more strongly to achieving the goals of the Paris Agreement. But will that be enough?

A new political approach is needed to bridge the chasm between reducing emissions, which scientists are urging to limit climate change, and implementing national commitments. So far, the international focus has been on damage limitation, reduction and restriction in order not to exceed a defined level of warming. This approach contrasts starkly with our growth-oriented global economy which is constrained by any form of regulation. For some time now, headlines have flagged a new climate strategy that attempts to resolve this contradiction: "Net zero emissions by 2050”.

In essence, what is needed is a roadmap on how to phase out fossil fuels by 2050 in order to ensure climate neutrality. But how can greenhouse gas emissions be slashed by 2050 to such an extent that everything that is emitted afterwards can be offset, meaning it effectively disappears from the atmosphere? To do this greenhouse gas emissions would have to halve every decade. This roadmap has two significant advantages. On the one hand, the goal is scalable; it can be applied to the global economy as well as to individual countries, economic sectors, municipalities, cities, companies, institutions and even to the families of the striking students. On the other hand, the goal is clear and transparent: climate policy action can easily be measured against it.

Halving greenhouse gas emissions every ten years requires immediate, vigorous and concrete measures at all levels and within all economic sectors, ranging from industry to transport and finance to agriculture. This cannot be achieved without serious investment in infrastructure, research and technology. In this way, the economy and the labor market will also benefit from this transformation. In addition to the exponential increase in renewable energies in the energy mix, the strategy also focuses, for example, on technologies for extracting CO2 from the atmosphere, hydrogen as a new energy source, improving energy storage options, increasing energy efficiency and much more. The economic benefits of such a transformation would also include massive financial savings, for example, in the healthcare sector thanks to cleaner air or in claims settlement industry which pays out following extreme weather events.

Some countries have jumped on the economic and social potential of the modernizing overhaul triggered by a net zero strategy and are pursuing this new policy as a national or multinational strategy. Sweden aims to reach net zero greenhouse gas emissions by 2045 and subsequently to produce negative emissions. A study commissioned by the Finnish Ministry of Economy and Labour has calculated that the country could achieve climate neutrality by 2040.

On the initiative of several member states, the EU Commission has also submitted a proposal to Parliament aiming for a climate-neutral Europe by 2050. Next year, the EU must submit a final version of its long-term climate strategy to the Secretariat of the United Nations Framework Convention on Climate Change. It is to be hoped that this will include a net zero strategy by 2050 – for the sake of the global climate as well as for prosperity and social welfare within the bloc.