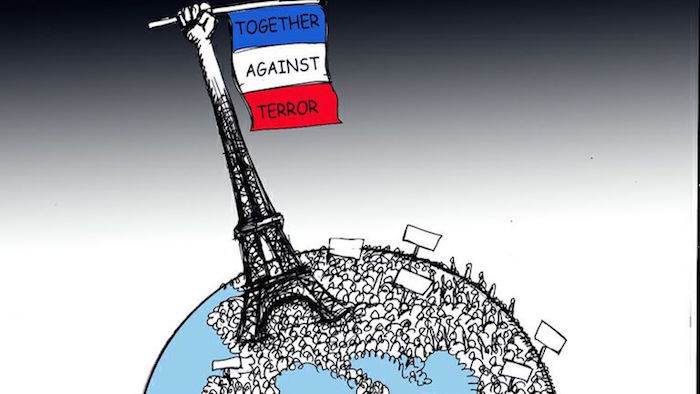 Is Europe up to the challenge?

The democratic marches that brought out nearly four million people in France and tens of thousands across Europe on 11 January in response to last week’s attacks in Paris are a reminder that liberty and democracy are not negotiable and that they are stronger than hate and fanaticism. Europe has an important part to play in facing the challenges ahead.

Yesterday’s march was an event without historical precedent. And it was hopefully a foundational act for Europe and France. Leaders of EU member states joined [French President] François Hollande and his predecessor Nicolas Sarkozy to show their solidarity with France after these acts of terror. Many other heads of state were present, including the leaders of Israel and Palestine, as well as the heads of EU institutions.

The Europe so often denounced as nothing more than a single market showed it was much more, and that it was capable of being much more. Faced with the barbarity of terrorism, it suddenly rediscovered its origins.

The European project began sixty years ago with one mission: to guarantee peace and democracy. [[Today, Europe must confront new challenges at a time when its prosperity is under threat.]] As Matteo Renzi has put it, Europe has a shared currency, but it has to give itself new tools to guarantee its security (in intelligence and defence), whether the threats lie at its borders (Ukraine, Syria, Libya) or come from within. It is now clear that more Europe is needed, not less, and this will not be easy. All the countries represented at the march will have to prove their determination to combat terrorism wherever it takes hold. Yet these same countries let Syria descend into chaos.

The act might also be foundational – or rather re-foundational – for a France stricken by doubt and divisions, caught in an economic crisis with no end in sight. And here again, it is when faced with terror and fear that French citizens remember the values upon which their country is built. The country has been surprised by the amazing international response to the killings. In the land of the Enlightenment, the execution of Charlie Hebdo’s cartoonists takes on a whole other significance, as does the anti-Semitic attack that followed.

When Angela Merkel, battling anti-immigration sentiment at home, claims to be impressed by the reaction of the French people, these are not hollow words. This exceptional global outpouring of support means France must live up to all that it symbolises: a republic in which people of all religions and origins form a pluralist, secular nation that rejects racism and fanaticism. Achieving this, however, will be tremendous challenge.

Waking up after this regenerative weekend will be hard. The old debates will resurface. Government, politicians of all persuasions and religious leaders must live up to expectations. The need for security must lead to effective solutions and to the rejection of the populist proposals that are certain to come. The left must prove its pragmatism and act without naivety. The right must be a force for constructive opposition and resist extremist factions. Wishful thinking? Exceptional situations demand exceptional responses.