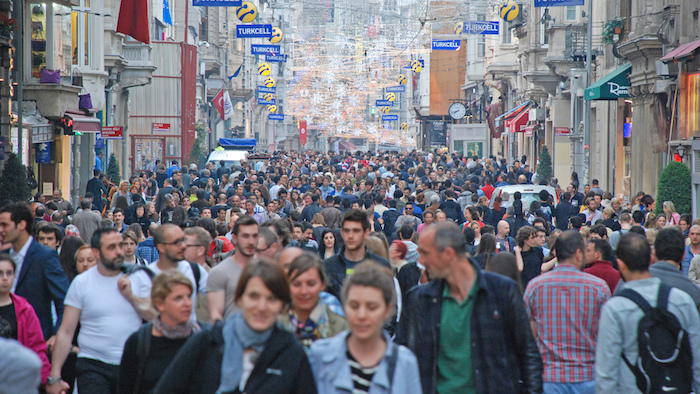 More secular than we think?

The Turkish sociologist Volkan Ertit, who authored books popular in Turkey like ‘Secularism’ and ‘The Age of Concerned Conservatives’, argues in an interview with Istanbul daily Hürriyet that Turks are becoming less and less religious.

In the interview, Ertit lists eleven points to support his thesis.

One Under Western influence, interest in religious topics has decreased in the younger generations.

Two Social acceptance of the visibility of LGBTIs is greater. As many as 40,000 people, a number once unthinkable, tried to walk in the center of Istanbul in a Pride march during Ramadan.

Three Pre-marital flirting is more acceptable and made easier by social networks. "Girls text their boyfriends even while sitting at the dinner table with their fathers".

Arda Turan is the most respected, most popular footballer in Turkey. This summer I read stories in the newspapers about his holidays. He was on holidays with his girlfriend, to whom he is not married, but no one found this odd unlike in the past. Turkish society has, perhaps unconsciously, started to internalize such attitudes.

Five Supernatural events used to be discussed in dedicated TV programs in the 1990s. Belief in supernatural forces is now ridiculed on Facebook and Twitter.

Six Interdenominational friendships and marriages between Sunnis and Alawites are on the rise.

Seven Turks of both sexes tend to wear more revealing clothes compared to the past.

Eight Imams used to have the final say in villages and to set rules about every aspect of life. Eighty percent of Turks now live in urban areas and turn to non religious experts for advice.

Nine The viewpoint and language of the media is more and more secular.

In one newspaper, there is a description of high-school teenagers and non-married couples about how to have sex via text messages. In another, a writer shares details of a group sex session he witnessed on a Greek island. Would these have appeared in the mainstream media 20 or 30 years ago? Or let’s look at the example of the most popular TV programs: Many shows aired on prime time, watched by millions, present a highly secular lifestyle as the norm.

Ten Social issues are discussed in secular terms. Turkish politicians who argue against abortion or alcohol do so as if those were health or human rights issues. Religious arguments aren't compelling anymore.

Eleven The “sacred” has less of an impact on ordinary lives compared to the past. In the words of the Directorate of Religious Affairs (Diyanet):

The youth of today sees the past generation’s world as narrow and unacceptable. We must work on a new language and tone with this in mind.

The current moralizing efforts of Turkish politicians, Ertit concludes, are about the relationship between the state and religion. Turkish society is not becoming more pious, unlike Turkey's political arena. As the number of woman wearing Islamic headscarves actually decreases it will be very difficult to reverse the secularizing trend from above.