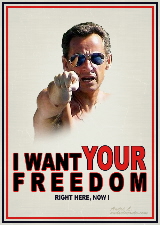 No peek-a-boo with President

Is France taking an authoritarian turn? So wonders left-leaning daily Libération. In Marseilles a 52 year old philosophy professor has been charged for “breach of the peace in daylight hours disturbing other people’s tranquility". The incident unfolded all of eighteen months ago in Marseilles’ central train station where PL (only his initials are known) yelled “Sarkozy, je te vois!” (I can see you) as a means “to break the ice with some humour” as two police officers carried out an ID check on two youths. Passers-by are said to have laughed at this allusion to the French president’s predeliction for law and order crusades. The police officers, however ( described by PL as "very kind" ) “felt intimidated” and “invited” wise-cracking PL to the station. Eighteen months later he received a summons.PL’s rebel yell would seem fairly innocuous, if not insipid, but Marseilles’ zealous local prosecutors have dug up the above-mentioned, and wonderfully eloquent, charge, from the very bowels of French law (dating from 1875) to protect presidential dignity. This, as Libération notes, is not the first of such incidents since the controversial Sarkozy rose to prominence. In 2004, an erudite demonstrator schooled in Roman period population movements was sentenced to one month imprisonment for having yelled “Go back to China, you Hungarian git” at the then Interior Minister - whose father hailed from Budapest. Unlike his tranquil predecessors, Chirac and Mitterand, the French president is renowned for his sensitivity when members of the public vent their pent. He has not just crossed swords with Breton fisherman, but last year launched a personal suit against a firm which produced a voodoo doll in his imageemblazoned with the “Get lost, silly twat” remark with which he dispatched a farmer at the French Agricultural Fair of 2008.

Sarkozy’s street-fighting style, many complain, has diminished the office of president. "He wanted to break with his predecessors by going down into the arena himself," says political commentator Stéphane Rozès. But in bringing the presidential function to street level, "he invites citizens' invective." What worries Libération most, however, is that the case against PL was launched not at the President’s instigation but by "the zeal of public servants". "In other democracies," writes editor Laurent Joffrin, "this little affair would have caused a major scandal. In the Republic, we have the right to make remarks about the sovereign". So is France’s often vulgarly eloquent street life being smothered by an increasingly monarchical Sarkozy aided by an obsequious judiciary ? One legal blogger alarmingly observes that "penal law is being instrumentalised in order to create a political police." Perhaps the mood would be less dark if the French left were able to rise out of the doldrums it has languished in since the passing of the Mitterand administration all of fourteen years ago. Le Monde reportsthat in the forthcoming European elections the PS, France's main opposition party, stands to win a lacklustre 22% of seats while the UMP at 27% will remain the largest French party at the Strasbourg parliament. The UMP, after all, is the party of a president whose approval ratings rarely go above 40%.

You can unsubscribe at anytime *
Categories
France