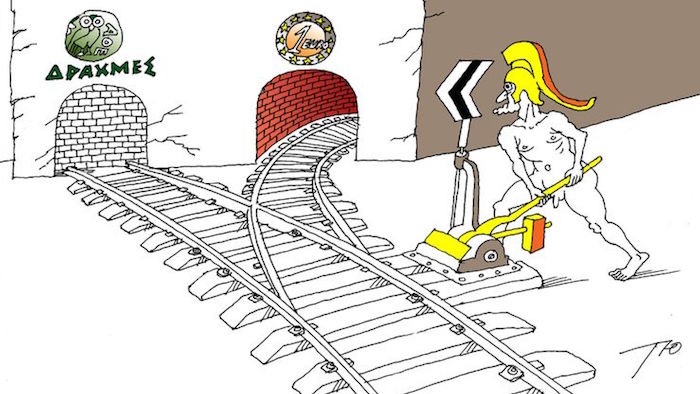 ‘On Tuesdays the euro, on Fridays the drachma’

Less than three weeks from general elections in Greece, Der Spiegel wonders about the intentions of Alexis Tsipras, the leader of the left-wing Syriza party and frontrunner in the campaign to form the next government. The German magazine sees mixed messages that leave observers across Europe “at times anxious and at others baffled” —

“Our party as a whole wants to see the country in the euro,” Tsipras has said, for example. But he qualified that statement by adding: “on the condition that social cohesion isn’t threatened.” On another occasion, he said the euro was “not a fetish” and that Greece was “nobody’s hostage,” whatever that might mean. […] Members of the current conservative government have joked that Tsipras’ positions are indeed clear. “On Tuesdays, Thursdays and Saturdays he wants to stay in the euro zone, but on Mondays, Wednesdays and Fridays we’re back on the drachma, and on Sundays he wants a referendum,” they say.

In any case, the magazine predicts a Tsipras-led government would be one of compromises, as Syriza is unlikely to win a parliamentary majority —

The aid programs for Greece from the EU and the International Monetary Fund expire at the end of February. Negotiations to form a coalition government will likely take longer than that. And in Brussels, high-level diplomats are hopeful that the economic and political reality will catch up to the leftist ideologues in Athens.