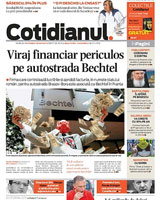 The first privately-owned daily to be launched after the 1989 revolution, Cotidianul (The Daily) was founded in 1991 by Ion Raţiu. Formerly a journalist at the BBC, Raţiu, who later rose to become an eminent figure in Romanian politics, established Cotidanul as non-aligned, moderate and objective. Its design and writing style are reminiscent of The Guardian, where Cotidanul's journalists were initially trained. After Raţiu’s death, the print version was modernised and opted for a French-style tabloid format. Unlike its fellow newspapers, the Cotidanul website is constantly updated. Faced with serious financial difficulties, the newspaper was printed for the last time on December 23, 2009. Its website remains active.