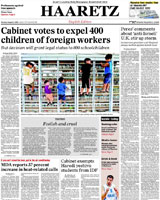 The first newspaper published in Hebrew under the British Mandate in 1918, Ha’aretz ("The Nation”) is the oldest daily newspaper in Israel and the paper to turn to first for the politicians and intellectuals of the country. Rather anchored on the left and hostile to the colonisation of the Palestinian territories (which earned it the accusation of being "anti-Zionist”) Ha'aretz ‘s editorial policy focuses on analysis and debate, and for it the paper is probably considered the most influential newspaper in Israel. Haaretz has an edition in Hebrew and one in English, both in print and on the web.