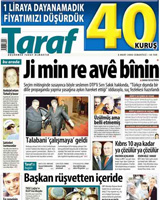 "Party" was founded in November 2007 by Turkish writer and journalist Ahmet Altan, who is now the newspaper’s joint editor along with Yasemin Congar, a former reporter for the daily Milliyet. Distinguished by its slogan — “Those who think cannot sit on the fence” — and its close collaboration with major bookshop and publishing house Alkim Kitabevi, Taraf is one of only a handful of Turkish newspapers to have recognised the Armenian genocide. The daily, based on the Asian side of Istanbul, maintains a strongly independent editorial line, and features the work of numerous well-renowned journalists and intellectuals. Most of the content of the paper edition can be accessed on the newspaper’s website.