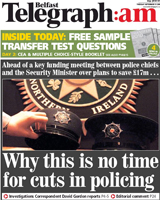 The Belfast Telegraph is the only locally produced newspaper to be read by both the Protestant unionist and Catholic nationalist communities in Northern Ireland.

Against a sizeable proportion of its Protestant readership, the paper supported the 1998 Belfast Agreement and welcomed the establishment of a new independent Northern Ireland Assembly. Maintaining an editorial line that is determinedly pacifist, the Belfast Telegraph has consistently condemned sectarianism on both sides of the community divide. It belongs to the Tony O'Reilly's Independent News & Media Group, which also owns the Irish Independent.

First appearing in 1995, the newspaper's website shares many design features with the other Independent News & Media Group websites, such as independent.ie and provides free access to most of the content of the print version.