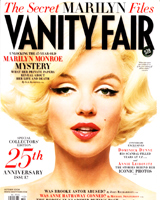 Founded in 1913, Vanity Fair took the name of a British magazine launched in 1868. When it merged with Vogue in 1936, this flagship of the powerful American group Condé Nast became the magazine of the cosmopolitan and literary elite. Relaunched in 1983, it became, under the direction of British editor Tina Brown, a leader in both glamour and circulation. Since 1992, with Graydon Carter at the helm, Vanity Fair has become a standard of American journalism with a mix of people, culture and lengthy investigations into public affairs. In 2003, Vanity Fair launched an Italian version, and in 2008 a Spanish version. Launched in 2007, the German version closed after two years.