Ideas Refugees in the Mediterranean 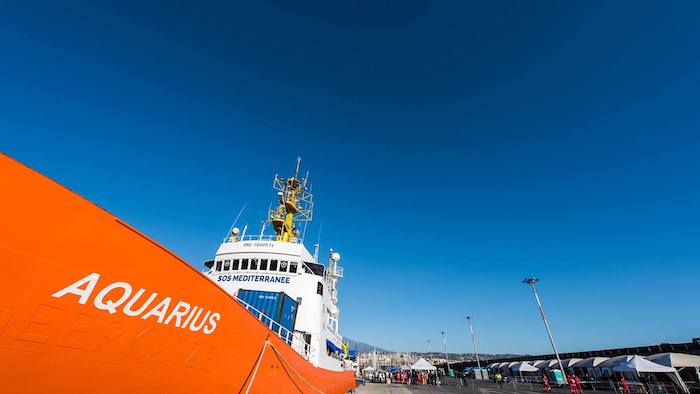 Ideas Refugees in the Mediterranean

As populist movements gain ground, European governments have chosen to repress innocent people exhausted by affliction, in the cynical and sterile hope of dissuading them from fleeing. Beyond an insulting domestic policy towards immigrants, they are trying to contain tens of thousands of people in Libya, far from the media and from those who defend human rights.

What possible pride could be drawn from telling our children the story of the Aquarius? How could we explain, without shame, the relentless pressure placed on this mission before it was forced to capitulate, leaving in its wake lifeless bodies pointed towards Europe? History will recognise the victors and their battles against injustice. Today, we seem defeated, beaten by the rampant anxiety upon which hatemongers shamelessly feed. But are we really defeated? SOS MÉDITERRANÉE will continue to defend the values of solidarity upon which it was founded: the organisation which chartered the Aquarius will remobilise its resources to save human lives at sea. In any case, shouldn’t our organisation reform around this very notion of solidarity, without which the dangers of tomorrow would become insurmountable?

The political courage to move beyond simplifications

Under pressure from the rise of populism, European countries decided to suppress innocent, grief-stricken people in the cynical and sterile hope of discouraging migration. Besides their insulting national immigration policies, European countries are also attempting to detain tens of thousands of people in Libya, far from the gaze of media and human rights defenders. Migrants there are forced to perish in prisons, victims of slavery and torture, where survival is more painful than death, where only escape by sea could salvage their dignity, unless they drown in the salted blood of those who preceded them.
Would it really be so unreasonable to help people in such distress at sea, on snow-bound mountains, in the arid Sahelian desert or the Libyan hell? Would it be so inconceivable to express a little empathy with the thousands of exiles, inexorably trapped between trauma and death? Would that take such an effort that our prosperity, however fragile, could not withstand?
Political resignation costs the lives and dignity of those who fall even as I write these lines. With the obstinate combat against these exiles, this resignation has put a knife into the inalterable character of humanist yet fundamental values. We are letting fellow human beings die in the Mediterranean and Libya on the false premise of halting the decline of our society, which is, meanwhile, prey to much more alarming dangers. Our leaders have chosen to let innocent people die on the altar of unfounded fears, fueled by various demagogues whose only uniting causes are isolation and the segmentation of our civilisation. Liberal democracy is shaken, and anxiety reigns. The indifference of citizens grows, making them all the more receptive to authoritarian discourses inspired by hatred.
Emerging from our debates, the systematic repression of humanitarian organisations and migrants themselves would seem to come at the price of pragmatism. And there is still nothing to prove that this strategy really discourages those desperate enough to brave the borders, nor that it protects us from other largely misconstrued, confabulated risks, be they economic or demographic. On the contrary, repression destabilises already unstable regions such as the Sahel; it’s a boon for criminal networks; and it inflicts a death penalty on anyone with the misfortune of being driven by desperation.
This political response, apart from trampling on our values and belittling the human race, is built upon falsely reassuring simplifications, as the actual challenges are underestimated. Instead of favouring resignation and excluding any expression of solidarity , such as that embodied by the Aquarius, it is the duty of all public officials to move beyond the fear and disunity spread by populism, at the risk of not having what it takes for the real challenges of our time.

When our children try to evaluate the role of the Aquarius during its two years of operation, they will surely see a symbol of solidarity, humility and humanity. On the other side, they will see its opponents as obstacles to progress. Those same people who have abandoned all form of courage and ambition on issues like climate change, the extermination of living species, and inequality; those same people who have left the keys to progress and the distribution of public wealth in the hands of market players: yes, those are the indolent spirits our children will legitimately criticise when they think of our deplorable migration policies.
Why not unite around the real threats, rather than tearing ourselves apart over a natural phenomenon, which is only a crisis because it was poorly managed? We urgently need to restore to migrants the dignity their humanity deserves. It is imperative that we focus on the real battles, where time is unforgiving, where indolence condemns us further each day, where cooperation and inclusion are inseparable from the hope for a prosperous future.
Let’s spare our children the legacy of a society where alterity means fear and solidarity is a crime. It is fraternity that will give us the strength to confront the challenges of tomorrow. It’s not too late to shift the paradigm.

This text reflects the author's personal views and does not bind the SOS MÉDITERRANÉE NGO.