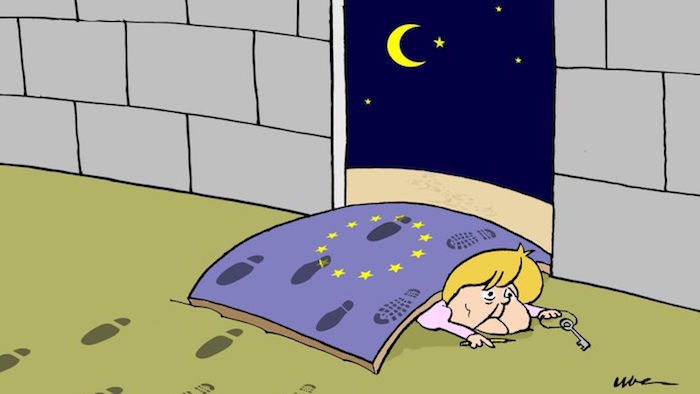 ‘The refugee crisis has transformed the political landscape’

The German press ascribed the outcome to the refugee crisis and to the growing distrust towards Germany’s two main parties, the CDU and the Social Democrats.

Angela Merkel was not on the ballot in any of the three Länder that held votes on Sunday. And yet her policies have been roundly rejected: for months nothing has aggravated German quite like the question of refugees.

For Die Welt, “the Greens have taken an historic and clear victory in Baden-Württenberg, ahead of the CDU. Meanwhile, the SPD has triumphed in Rheinische Pfalls and plummeted in Saxony-Anhalt. Forming a government will be complicated”. According to Ulf Poschardt,

The refugee crisis, the ever-dominant theme of the past weeks and months, has transformed the political landscape. The AfD’s triumph signals the emergence of a loud, often even primitive opposition to excessive government policy.

“In Baden-Würtenberg CDU is behind the Greens. AfD doubles the SPD score. Great Coalition loses majority in two Land. In Saxony-Anhalt AfD is over 20 percent”. Bild columnists Rolf Kleine and Ralf Schuler write that —

The refugee crisis has made its mark on the regional elections, which have upended the political environment. The former coalitions have been voted out in all three Länder – but the regional ministers themselves may still hold on to power in a new constellation.

“Populists get a double digit score, the Greens celebrate an historic success in Baden-Württenberg. The SPD is defeated, but Malu Dreyer is ahead in Mainz”, headlines Süddeutsche Zeitung. For Heribert Prantl,

This super Sunday – with three regional votes – will go down in German political history: it was and is a glimpse into the future of Germany’s democracy. It shows the continued crumbling of the old party-lines; and it directs our attention to the threats to our democracy, bearing the letters AfD; fascism is stirring in the East. But Super Sunday also shows how to counter the threat: with steady composure, the trademark of Winfried Kretschmann.

“Local polls are considered a confidence test. Citizens are distancing themselves from the main parties. We cannot go on like this,” believes Handelsblatt. Sven Afhüppe argues that —

If votes describe society’s psychological state, then the electoral results in Baden-Württemberg, Rheinland-Pfalz and Sachsen-Anhalt are at the very least the warning sign of a heavy bout of depression. Voters have withdrawn their trust from the CDU and the SPD like rarely before in Germany’s post-war history, dealing heavy losses to both parties. Protest voters and absentees are the real winners of the votes – food for thought for the established parties.

The victors of the 13 March votes are fear, isolationism and authoritarianism. The AfD has been leading the pack in this respect, but is not the underlying cause. The underlying cause is, in fact, that many big political players have lost faith in themselves and their way of doing things. They mistrust their grassroots, they mistrust their supporters and they mistrust the population as a whole. Truth be told, they mistrust Germany itself. For the entire election campaign, they were incapable of believing in the country’s readiness to help those in need, of believing in that the majority of voters are patient and honourable. Instead they have talked themselves into believing that the public mood has turned sour.