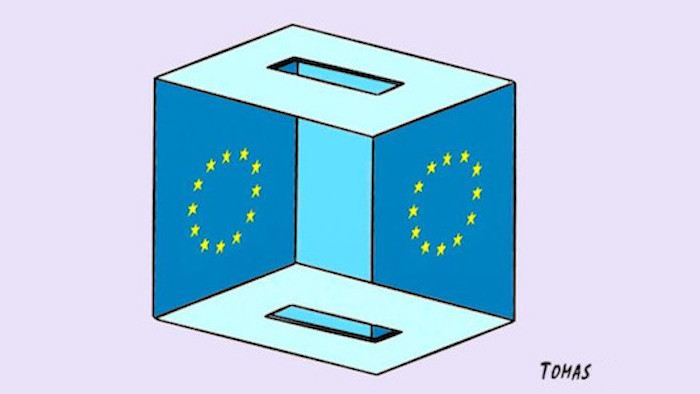 Ever since the first European elections in 1979, turnout has been on the decline. But in 2019, the contest is set to be particularly fierce. Indeed, the vote may come to determine the course of the European Union at an absolutely crucial moment in its history. Wake Up Europe looks at which are the main issues and on how more people can become engaged in what is arguably the largest democratic exercise in the world.

1. Geopolitics and migration
Since the last time Europe went to the polls in 2014, the global geopolitical system has experienced more instability than at any time since the Second World War. On the borders of Europe, a new breed of authoritarian strong-men have eroded democratic norms and traditions in their own countries and have routinely flouted the rules based international order encoded in the post-war era. Crackdowns on civil society in Turkey, and Russia’s increasing appetite for projecting its military power, have incrementally raised instability on Europe’s doorsteps.
Meanwhile, across the Atlantic, the Trump administration is equally unpredictable – undermining the NATO alliance, and favouring a unilateralism premised on the ruthless pursuit of nationalist self-interest, rather than the international rule of law and collaboration. Can Europe rise to these immense new challenges? The EU’s foreign affairs chief Federica Mogherini, featured in the Wake Up Europe film Europe At Sea, recently undertook efforts to bypass US Sanctions against Iran, showing that major divergences in foreign affairs across the Atlantic are already changing the post World War consensus on cooperation in the West. This more assertive role for Europe on the international stage in a hostile world could be a major factor in the vote this May.

With ever greater instability beyond the borders of Europe, the presence of large numbers of migrants and refugees on the southern and eastern fringes of the continent became one of the most potent political issues during the current European Parliamentary term. Although contemporary mass migrations are no longer making headlines, they will remain an unavoidable feature of the debate for both the left and right when the next parliament sits.
Do Europeans fully understand these issues and the importance of their voting choice?

2. Populism and democracy
Within the EU itself, an alliance of populists and nationalists seems intent on tearing up the fabric of the European project. Brexit is just one symptom of this rupture – with the likes of Italy’s Lega Nord exploiting xenophobia and economic hardship to polarise public opinions. . Foreign and darker forces are overtly and covertly interfering with European national politics. Putin’s Russia offering financial support to extremists forces, or Trump’s former strategist Steve Bannon’s new project “The Movement” trying to create a nationalist ‘revolt’ in Europe are a chilling example.
It is becoming ever more apparent that nationalists in Europe are getting – paradoxically – organised internationally. Across the political spectrum, there is anxiety that a nationalist breakthrough this May could bring the continent back to national confrontations and resurrect the spectre of fascism in Europe. Ghosts that many thought were buried. Salvini, Orban, Le-Pen and others may or may not take up Bannon’s offer of help to slay the globalist “vampire” in Brussels, but a surge in anti-EU votes in May could deal a blow to a Europe still attempting to face the Brexit disruption. At the very least, it could destabilise the traditional two party system between the centre right and centre left that has prevailed since the Parliament was founded, increase fragmentation and weaken decision making.

Despite the rise of anti-EU forces, popular support for the EU is at its highest level in 35 years. Yet, many leaders now worry that the project’s future is in peril. Underpinning so many of the challenges the continent faces is the question of how a European prosperous future can be secured in a rapidly changing world. In 2014, turnout for the European Parliament elections reached an all-time low of 43%. Perhaps the greatest issue facing Europe is how the voices of the people can be heard, when a majority choose not to participate in democracy at a European level. Can European voters wake up to the magnitude of the challenge?

3. Technology and disinformation
Europe’s role in relation to big tech has become ever more prominent. Measures like GDPR show that the bloc is one of the few global players big enough to defend individual freedoms in the digital sphere, while proposals such as the Digital Single Market offer still greater integration across borders. But there are many darker sides to the tech revolution that the EU has to confront – such as the rise of cyber warfare, surveillance techniques, the manipulation of public opinions through disinformation and the potential for censorship on social media – issues destined to become ever more significant over the coming parliamentary term.

As shown in the documentary Pre-Crime, personal data is already being used in law-enforcement algorithms to weed out potential criminals, the state and its agents are already capable of monitoring the lives of its citizens in far greater detail than ever before. Social media giants often unwittingly fuel fake news and extremist opinions, creating a “no-mans land” of information that we are currently unable to police effectively.
Like so many other challenges faced by Europe, these issues do not respect national borders. If the EU isn’t bold enough to provide comprehensive answers to the vast array of tech-related political questions, who will? We urgently need new rules. And trustworthy information. Will the answers emerge from new online communities in turn, like open-source fact checkers Bellingcat?

4. Austerity and inequality
The fallout from the 2008 financial crash and the Eurozone crisis tested Europe’s reputation as the foundation of shared prosperity. With austerity measures in Greece and beyond exacerbating youth unemployment, the erosion of public services and standards of living across the board gave succour to movements beyond the traditional centre of politics. Over the same period, costs of living and gentrification in many of the continent’s largest cities have created a new precarious generation, wracked by poverty and debt and lacking the social contract and opportunities once available to their parents.
The nature of these struggles was recently dramatised in Yorgos Avgeropoulos’ impactful documentary, Up To The Last Drop, about the austerity driven agenda of privatising water companies and the grassroots response to this from people all over Europe: incensed at having to pay for a crisis they had no part in creating. But in addition to popular upheaval, anti-austerity arguments are gaining ground amongst experts too. For example, the Institute for International Finance recently published findings suggesting that Europe lost out on GDP growth of 10% due to austerity policies. Can Europe chart a new course?

5. Climate change
Emmanuel Macron’s attempt to make tackling climate change central to his policy programme backfired spectacularly when the “Gilet Jaunes” or “Yellow vests” insurgents took to the streets of France, angered by new diesel taxes and rising living costs. But the need for urgent measures to tackle global emissions has never been greater: according to the IPPC, the world has only 12 years to cut global emissions in half.

A crisis that demands international cooperation, it is impossible for European countries to tackle these problems alone. Can Europe lead the world on this issue? Or will it be held back by the growing populist tide: only three of the 21 right-wing populist parties in the current European Parliament accept the scientific consensus of man-made climate change. In the coming elections, the survival of Europe and its shared institutions could end up being tied to the survival of a habitable planet.

Globally, the gap has widened this year for the first time since the World Economic Forum annual report on gender equality began in 2006. Beyond this troubling picture, the role of women in society, and their ability to be full participants in European democracy, will play a crucial role in shaping the future of the EU. Not least because it is estimated that achieving gender equality by 2050 would lead to an increase in the EU’s GDP per capita of 6.1 to 9.6%, or from €1.95 to €3.15 trillion.

Celebrating the EU through documentaries

A film festival for waking up Europe

These issues will form the basis of the first ever WAKE UP EUROPE Festival: a unique transnational film event, focused on debating the future of Europe, from 17-19 May.

We passionately believe in the power of documentaries to foster understanding of complex issues, that we need to wake up to the common challenges we face as Europeans, and that democracy can only function when voters are able to make informed choices.

If you share these beliefs, we want to hear from you – join us and help us Wake Europe up with the power of film and debate.