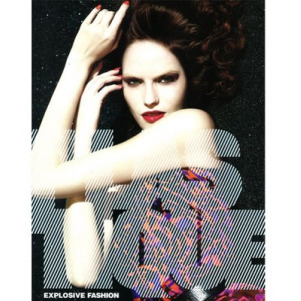 The truth? There is no crisis

Very recently, I ran into a copy of London’s ultra-glam Plastique, a “Bi-Annual Luxury Fashion and Culture Magazine”. Plastique is so stratospherically glam that its website just leads you to three photos of a woman who looks like she’s been on the skag since her sex change but is too rich to care. You can click on absolutely nothing else. On the Info section of its Facebook page, however, Plastique’s mission in capitals is “Let the Truth be Told”, and after a few minutes of leafing through smurm inducing glossy pages of androgynous seven foot long models and socialites either in semi-porn scenarios or partying mode, which are sort of the same thing in a Plastique world, (i.e. people looking like drool is about to fall out of their mouths, but their eyes say “Not Now”) interspersed with an Alain Badiou interview, it struck me that a certain truth had been told.

Let the Truth be Told came to me again after seeing a poster for some new stratospheric super smurm luxury brand in Paris’ Place de Republique which depicted the dishevelled, lubber-lipped, owl-eyed kids of Mick Jagger, whose names I’ve completely forgotten, in partying mode ( i.e. about to start drooling). And the truth is that in a certain parallel society, this is the Roaring Twenties, or the Belle Epoque. This is strange, because if you read the papers, you’d think there was a crisis going on.

Now this can mean either one of two things, that the Roaring Twenties was a myth: that a certain section of society roared, while the majority squeaked. And if the insouciance of the twenties is a lie, then the terrible thing is that the lie endures, while the historical reality is forgotten. On the other hand if the Nouvelle Belle Epoque/Twenties images of Plastique in any way reflects a mood, a trend, the reality to come, then it follows that there is no crisis at all.

This is where Mick Jagger’s children come in, since they are proof that a new age of dynasties is thriving. Traditional aristocracies have faded, but the children of new money from the media and the arts become global brands through droit du sang. This is even more flagrant in societies like France, where the majority of film stars and directors are the children of, well, film stars and directors, who when they’re fed up with acting, make an album or something, which then goes platinum.

All this, then, to your blogger, at least, suggests that we are in a period of social regression. Nevertheless, I would like to insist again, that there is no crisis. There is only which side of the money you're on. On a more personal note, I would like to propose that neither was there ever a boom, a tiger, in countries like, say, Ireland. As far as I'm concerned, the only true measure of economic growth is an increase in civilisation. In Ireland, the roads, the trains, local councils are still rubbish and always have been. The increased well-being of the Irish depended on absolute debt, while the one stretch of motorway between Navan and Dublin still doesn’t have a petrol station. Not one. While we crowed about growth and how Germany could learn lessons from us the towers of Finglas still contained poor people, junkies still shuffled on our Champs Elysées – O’Connell Street.

But this also means that talk of Ireland defaulting in the future is all fiction too. If we are living in caste-bound societies, static as the Egypt of the Pharoahs, then there is nothing to look forward to nor regret. Buy a copy of Plastique, the Magazine of Luxury and Culture, and you’ll soon understand what I’m getting at. Fashion magazines predict the future, but this one isn't yours.