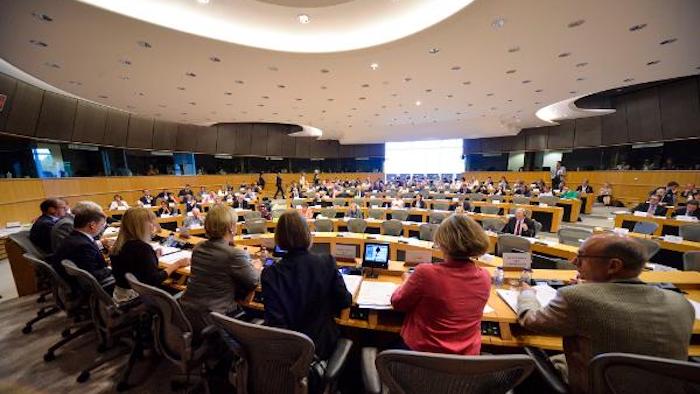 Welcome to the EU engine room

Welcome to the EU engine room: the European Parliament's 22 committees, which churn out hundreds of new laws and non-binding reports each year and keeps an eye on other European institutions.

European Parliament (EP) committees made the headlines in autumn when they rejected French, Hungarian, and Romanian nominees to join the European Commission. The candidates' hearings were prepared by each committee's "secretariat", a group of EP officials. The committee chairs led public debates with the nominees in which MEPs from every EP group fielded questions. The groups' "committee coordinators", or spokesmen, then met in secret to negotiate how their MEPs would vote and the decisions ensued.

The EU nomination cycle happens once every five years, after EP elections. But it gives an insight into how the EP's 20 permanent committees and two sub-committees conduct their business. Their day-to-day work consists of binding "co-decision" on EU laws, in areas such as the single market, economic governance, immigration, trade, industry, and climate change. They help agree how much the EU will spend in its multi-annual budgets and how to divide up subsidies to farmers and poor regions. The committees' daily work also involves non-binding "consultation" on EU decisions in other areas, such as foreign policy, taxation, and competition law.

And the EP engine room produced texts that underpinned 2,625 plenary votes on legislative and non-legislative reports in the past five years. Each committee contains between 21 (fisheries, the smallest) and 71 (foreign affairs, the largest) members. The chairs and deputy chairs as well as other members get their seats for a two-and-a-half year period via the "D'Hondt method". The algorithm, named after a 19th century Belgian mathematician, has often been the butt of jokes on the Byzantine obscurity of EU rules, but it makes sure every political group gets a fair share in relation to how well they did in the EP election.

The committees normally work by electing "rapporteurs", MEPs who draft legal and non-legal texts. The rapporteurs are chosen via another complicated points system, in which EP political groups bid for a report on a given topic, as in an auction. The committees debate amendments to those texts in public hearings, invite experts, and send fact-finding missions if need be. The coordinators also play an important role in rapporteur appointments. They appoint shadow rapporteurs, prepare committee decisions, and whip their own group members into toeing the line. The committees then vote on final drafts, which they pass on to plenary sessions for the EP's formal seal of approval.

But the 2,625 number of EP decisions in the past five years tells only part of the story.

The committees normally grind legislation proposed by the European Commission, which also has to be agreed with member states. They do it ahead of first and second "readings" of the laws in the EP, which take between one and two years to complete, but if initial talks do not end in agreement, they appoint special teams, called "conciliation committees", to finalise negotiations with EU countries' diplomats. They also get involved in other nitty gritty in Europe's law-making machine, by taking part in "trilogues" and by helping to forge "delegated" and "implementing" acts.

Trilogues see rapporteurs sit down with EU commission officials and EU diplomats in secret meetings to hammer out informal compromises. And there were 251 of them convened in 2017, in what was part of a growing trend in the way the EU capital works. Delegated acts supplement or amend existing legislation, while bypassing normal procedure for making whole new laws. Implementing acts give details on how to put the law into practice in micro-decisions which can have serious financial implications for industry.

The committees normally wait for the commission to send legal proposals. But they can also put out "own initiative" reports, indicating the EP's views on a given subject, and call for the EU commission to draft new laws on matters of concern, even though the commission is free to ignore such an appeal. Some of them have special tasks, such as the subcommittee on security and defence, which monitors the EU's 16 overseas civilian and military missions, ranging from a police force in Kosovo, to coast-guard training in Libya, and an anti-piracy force in the Indian Ocean.

Others, such as the foreign affairs committee, debate grand ideas on Russia and China geopolitics, while others still, such as the petitions committee, handle smaller issues, such as the distance between desks in Polish schools or the right to fly with pets. But even those which exerted soft power only still helped shape what comes out of Brussels into wider Europe, with the petitions committee chairman, Spanish MEP Dolors Montserrat (EPP), saying that its recommendations or its memos to EU embassies "sometimes" amounted to "considerable influence" even if they had no legal force.

Each committee elects a chair and up to four vice-chairs amongst its full members, explains EUobserver. However, the size of committees can vary significantly – from 21 (fisheries, the smallest) to 71 (foreign affairs, the largest) members. Belonging to a political group has a direct impact on the representation of MEPs in the different committees.

The biggest group of the EU parliament, the European People's Party (EPP) has the largest representation (33.3 percent) of chair committees, followed by the socialists (S&D) with 23.8 percent and the liberals Renew Europe with 19 percent.
However, the smallest political groups receive very few committee chairs. 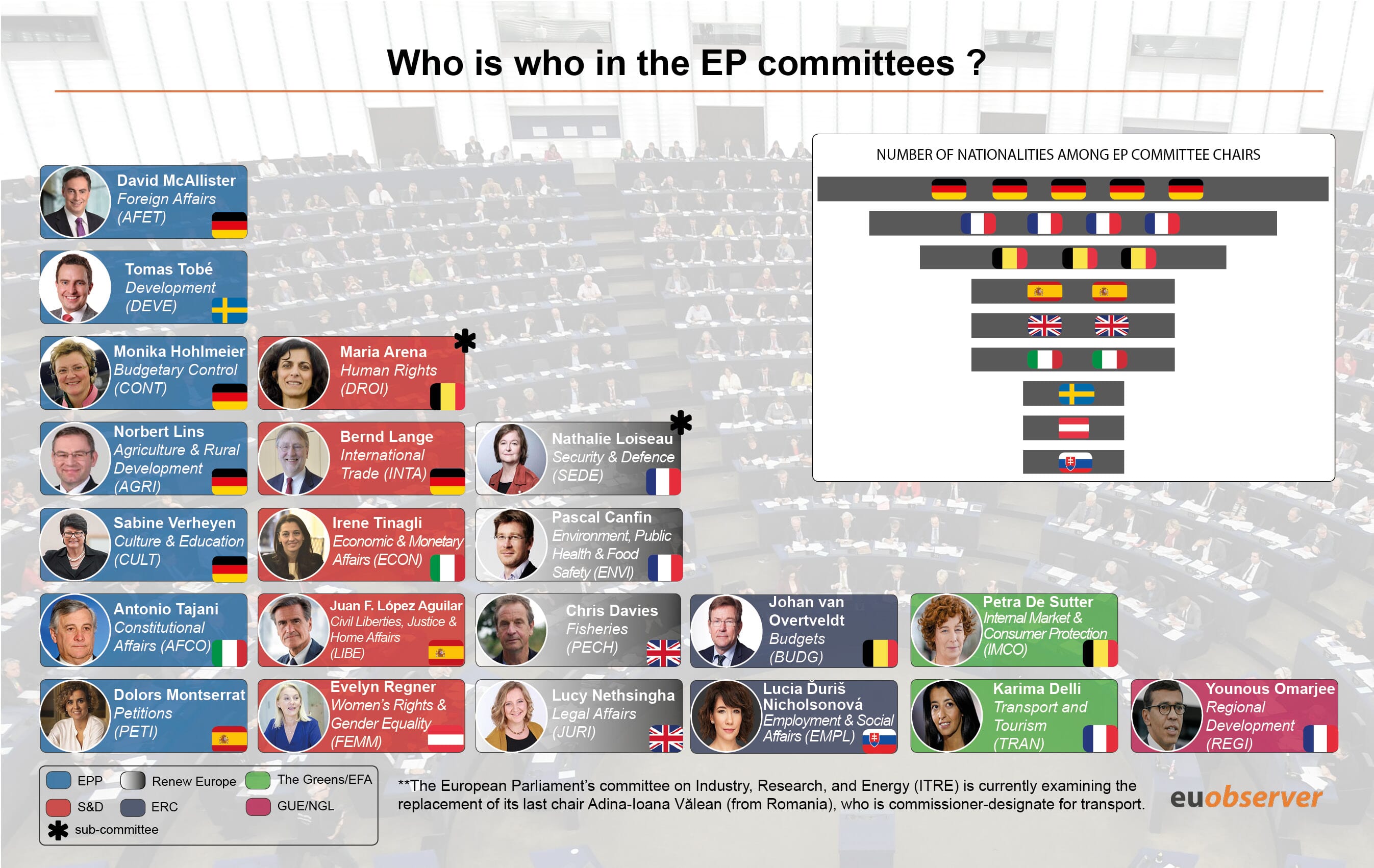 This is the case for the Greens/EFA and the conservatives (ECR), which have only two committee chairs (9.5 percent) and the leftist group NGU/GUE, which only leads the committee on regional development, with French MEP Younous Omarjee (4.8 percent). According to the parliament, "non-attached members can nominate individuals to committees and delegations, but they are unlikely to be elected to positions as committee chairs or to be appointed rapporteurs on significant dossiers".
The breakdown of the parliament's chair committees by nationality is also uneven.

Germany and France are significantly represented with five and four committee chairs respectively leading important EU policymaking areas, such as foreign affairs, agriculture, security or environment. Three Belgian MEPs lead the committees of the internal market and consumer protection, budget and the sub-committee of human rights. The UK, Spain, and Italy have each two committee chairs, while Sweden and Slovakia have only one. Central and eastern European countries are largely under-represented at committee chair level.