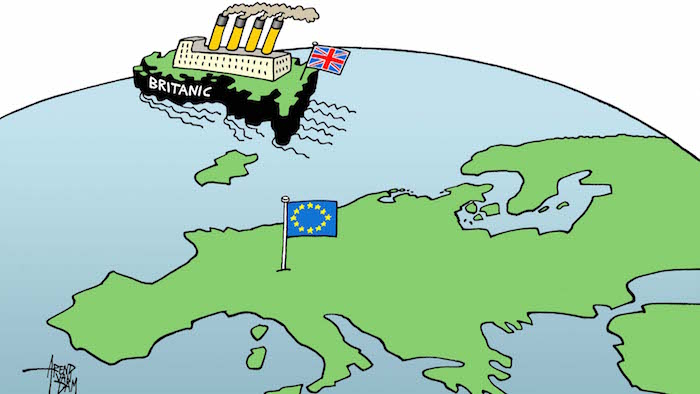 A big opportunity for Europe

Rather than a disaster for the European Union, Britain's exit would be opportunity for Europe's economy and for countries willing to move forward towards a deeper integration, says essayist Edouard Tétreau.

“A drama… an irreversible dismembering” of Europe, says Manuel Valls, French Prime Minister. But would Brexit, the ever more likely departure of the United Kingdom from the European Union, be the apocalypse some predict?

I put forward the opposite case here: Brexit is a fantastic opportunity. First off, for Europe itself. The UK’s exit would put a definitive stop to the EU’s hurried enlargement. The UK always encouraged this policy, seeing it as an effective way of diluting the Franco-German partnership that has called the shots on the continent. This enlargement has had two damaging consequences: states were integrated into the EU and even into the eurozone before they were ready, from Greece – doctoring its public accounts to benefit from the euro’s financial profligacy – to Viktor Orban’s Hungary and Bulgaria – one of the most corrupt countries in the world.

Europe’s real “dismemberment” lies there: in the Brits’ deliberate desire to enlarge institutions that worked well with a dozen members, but which is no longer manageable in the cacophony of twenty-eight country summits. The EU’s inability to face up to recent crises, from the smallest (the Greek crisis) to the largest (the euro, terrorism, migrants), is proof of this. Brexit would therefore start a process of reorienting Europe around countries that genuinely want to go forward together.

Brexit is also very good news for France and French diplomacy. It will not change the remarkable and close-knit joint military ventures between the UK and France, in operation since the Lancaster House Treaties. But it will allow France – along with Germany – to instil into the EU a less interventionist foreign policy. This diplomacy was present in the Iraq War, supported by Tony Blair, and in NATO’s eastward push to Ukraine, reawakening Russian paranoia.

With Britain out of the picture, Europe will rediscover a diplomatic strategy closer to its interests and values, centred around three possible axes. First, a more relaxed relationship with Russia: the historic agreement last week between Pope Francis and Patriach Kirill of Moscow, to denounce and stop the slaughter of Christians in the Middle East, has been a hopeful sign in this regard. Second, relaunching and reinventing Europe’s relationship to the Arab world following the agreement with Iran. Finally, setting Africa and the Mediterranean, Europe’s future, as a strategic priority for better or for worse.

Last but not least, Brexit will be an historic godsend for Paris: in several months, the City of London will lose the essential part of its reason for being, which has made it the financial centre of Europe. Literally transformed into an offshore fiscal haven, the City will see its banks and asset managers flee en masse as they seek to continue their operations in the European market without the regulatory barriers or the taxes that would apply to London-based establishments stripped of their European status. Thousands of executives, lawyers, bankers, but also heads of European and global groups will have to move into the EU to continue their activities. Paris – alongside Berlin – is the best placed city to welcome these talents. As Europe’s tech capital, Paris has, for many years, been a hothouse of exceptional talent in finance and consulting, illustrated by the world-leading status of many of our companies in these areas.

To paraphrase Boris Johnson, the Mayor of London, in 2012: “Welcome to Paris, my friends.” Having rolled out the red carpet from London to Paris, we will have to infuse the city with the same spirt of freedom, pragmatism and optimism that London has enjoyed for so long. The City’s big players will not be lured over with promises of stripping away people’s nationality, rampant public deficits, fiscal instability, or a national preference for subsidised unemployment over work. But they will come if we chose a political leadership proposing the opposite of what exists today.