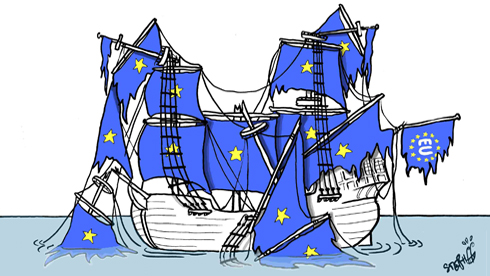 Whether it’s about coming up with a common position on the Syrian conflict or defending its conquests in the area of new technologies, Europe seems unable to respond to the challenges of the world. Is it still capable of a turn-around?

It took 17 days to Europeans to raise their collective voice on the chemical massacre of August 21 in Syria. And they did that only after the intervention by the American, John Kerry. Humiliating.

At the same time, Europe, which saw the birth of the GSM technology that dominated the global mobile telephony, is watching Nokia, the last major European producer of smartphones, get swallowed up by America’s Microsoft.

The old continent has lost the battle of innovation to the United States, and to new players such as South Korea and China. Is Europe condemned to be a vast market of consumers, after having dreamed of being one of the powers that would shape the world of tomorrow?

Everyone knows the quote by Henry Kissinger: “Europe? Give me a name and a phone number.” The Syrian crisis shows that the wicked quip remains on-target, despite the ambition of Europeans to give their union a “common foreign and security policy”. Throughout this crisis with its many twists and turns since the chemical weapons massacre at Al Ghouta, the 28 have failed to speak with one voice. France and Great Britain took leadership positions (up until the Commons vote that forced David Cameron to withdraw from the project of military strikes) without persuading the other 26 countries to join them.

To the point that, on his arrival at the G20 in St Petersburg, European Council President Herman Van Rompuy, whose existence is regularly forgotten there, began by distancing the Council from the position taken by an increasingly isolated France.

It took the meeting of the 28 Foreign Ministers in Vilnius following the G20, which was attended by the US Secretary of State John Kerry, for Europe’s chief diplomat Catherine Ashton, whose existence is also often forgotten, to express a firm stance on principles condemning the use of chemical weapons.

No doubt this is partly the result of the astonishing inaction of French diplomacy, which has not actually attempted to mobilise the support of the other Europeans, and to Germany’s absorption in its election campaign, which explains why it has taken so long to take a clear position.

It is, however, above all else, the enduring weakness of Europe that lies at the root of the malaise, and that weakness predates even the latest crisis in Syria. The creation of a European diplomatic corps under new institutions, led by the very professional French diplomat Pierre Vimont, has not been enough to bestir a political animal that had fossilised before it had even proved itself.

It is one of the great end-of-summer news items from the world of business: Microsoft has swallowed up the mobile phone segment of Finland’s Nokia, the last big manufacturer of mobile phones in Europe. After France’s Alcatel, Germany’s Siemens and Sweden’s Ericsson, which all threw in the towel one after the other, it’s now Nokia that is stepping into the shelter of the American flag, after having reigned over the telecoms world for many years. In just a few years the universe of mobile telephony has completely changed its face, without the Europeans ever waking up to what was happening to them.

Where the Europeans once controlled 80 per cent of the world market with their second-generation GSM standard, the emergence of smartphones has reversed the situation. The top dogs in the sector are now called Samsung, Apple, Google and, gradually, new Chinese brands like Huawei, ZTE or Xiaomi, and Taiwan’s HTC. [[The United States, South Korea and China: this leading trio has completely marginalised the Europeans in a key sector of technological innovation]]. Europeans do still have a presence in network equipment (including Alcatel, Siemens, Ericsson, Nokia) and rumours of mergers between companies that are faring rather poorly are buzzing through the markets.

The sinking feeling is raising worries about Europe’s ability to remain a land of innovation and technological creativity, beyond Airbus and some all too rare successes, and not just a large and captive market addicted to buying machines designed and manufactured by others. Can Europe pull itself together, or is it condemned to remain the vast market wished for by those who, like the British, have never joined in the project of political union that has driven so many Europeans for half a century?

The financial crisis of recent years has damaged the solidarity and the common political will of the current 28 countries (since the accession of Croatia on July 1), gradually giving way to apathy at best, and to the rise of populism and withdrawal into nationalism at the worst.

[[Europe's leaders have managed to avoid the worst during the storm in the Eurozone, but they have failed to prove to their people the relevance of the European project]]. On the contrary, in the absence of any real reasons to believe, they must cope with scepticism and growing rejection.

The guarantee of peace, which was the engine of the founding fathers in the aftermath of the Second World War, is not sufficient to win support, even if – and the strong image of Oradour-sur-Glane last week has reminded us of this – the weight of history cannot be brushed away by sleight of hand.

Yet this Europe that has made peace with itself is no more able today to reflect on the conflagration unfolding outside its borders in Syria, being laid waste by civil war, than it is to come up with a new joint project for its citizens.

Can this joint project still be drafted by a France suffering poor economic health and sagging morale, by an overpowering but timid Germany, or by a few others like Poland, the major success story among the new members?

European leaders have a window of opportunity between the German elections in late September and the European elections next spring, which promise to be disastrous, to summon up a collective burst of energy. But an objective analysis of the state of Europe, and its current leaders, leaves one doubtful.