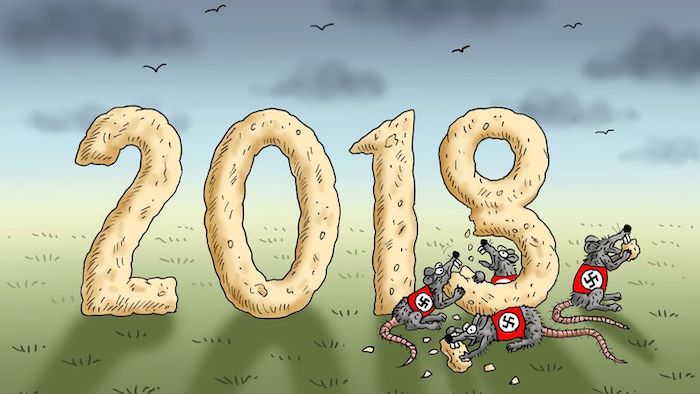 A critical year ahead for Europe

If 2018 has been a troubled year in politics, 2019 might well be at least as hectic. As the uncertainties around Brexit will dominate the early months, much of the attention will also focus on the European elections’outcome: populist parties are exepcted to gain ground, shaping the EU’s ability to run under the traditional “Franco-German engine”, says political scientist Cas Mudde.

For anyone who was hoping for a break in the hectic politics of the past years, 2019 won’t be it. Next year is a massive election year in Europe: parliamentary elections in seven EU member states (as well as Switzerland), presidential elections in six (as well as Macedonia and Ukraine), and, of course, the mother of them all, the European elections in May. And those are just the scheduled elections. So, to predict what to look for in 2019 is almost impossible, let alone in a short piece like this. Still, let me give it a try.

First, whether we want it or not, and most of us haven’t wanted it for months, Brexit will dominate the first months of 2019. Will there be a new parliamentary election? A “People’s Vote” (i.e. a second referendum)? A deal or no-deal Brexit? Or even a Brexit at all? Your guess is as good as mine, but it will keep us preoccupied for at least a few months more. As will be the political fallout of the (non-)decision, most notably within the UK itself, but also for the EU and its member states, the Republic of Ireland in particular.

Second, the so-called “rise of populism” will yet again dominate much media coverage of the various elections in 2019. While populist parties will overall make some modest gains, these gains will be very uneven, and mostly on the radical right. Parties currently in government are expected to take big hits, i.e. Finns party in Finland and SYRIZA (as well as the Independent Greeks) in Greece. Even the Danish People’s Party, that supports the liberal minority government, is polling at a (modest) loss. At the same time, several populist radical right parties in opposition are expected to do very well, notably Flemish Interest in Belgium and, particularly, the most ignored far right party in Europe, the Conservative People’s Party of Estonia, currently polling above 15 percent.

The main exception to this overall trend is Law and Justice (PiS) in Poland, the third main political story of 2019. Despite domestic opposition and international critique, including relatively forceful EU opposition – particularly compared to the EU’s kidglove approach to its role model, Viktor Orbán’s Hungary – the increasingly populist radical right PiS government has increased its popularity. Unlike Hungary, however, PiS faces a reasonably well-organized liberal democratic opposition, Civic Platform (PO), and cannot profit from an extremely disproportional electoral system. The 2019 elections will determine whether PiS can achieve a constitutional majority – with the (tacit) support of Kukiz’15 – so that it can truly adopt the illiberal “Budapest Model” or whether it will have to continue to push through its illiberal agenda without a democratic mandate. Relatedly, it will force the EU to show its hand: will they be willing, and able, to sanction Poland? Or will the EU apply kidgloves to all illiberal democrats within its circles?

The fourth, and obviously biggest, story of 2019 is the European elections of May. The question here is not even so much the electoral results of the different political groups, and their individual member parties, but rather their compositions. With the Brits out, presumably, many political groups are facing fundamental challenges. The “soft Eurosceptic” European Conservatives and Reformists (ECR) are dominated by the Tories, while the “hard Eurosceptic” Europe for Freedom and Direct Democracy (EFDD) by the United Kingdom Independence Party (UKIP). While the EFDD is expected to collapse, the ECR could pick up many of its members, and move more towards the radical right, which might make some kind of cooperation, or maybe even merger, with Marine Le Pen’s Europe of Nations and Freedoms (ENF) a possibility.

At the same time, the European People’s Party (EPP) is expected to lose a bit, but it will probably increase its (relative) lead over the Socialists & Democrats (S&D). Even more importantly, by choosing Manfred Weber as Spitzenkandidat over Alex Stubbs, the EPP has fully committed itself to a more right-wing political course, which further weakens the “centrist” EPP-S&D-ALDE alliance, which has dominated the European Parliament until now. While there will probably remain at least two hard Eurosceptic Right groups, of which one might remain outside of the “realm of the respectable” for official coalition politics (i.e. ENF), Eurosceptic forces within the EPP could use them to achieve veto power, making significant further European integration more problematic and less likely.

In the end, however, much of this depends on one man, the fifth and last story, French President Emmanuel Macron. Challenged in the streets by the so-called Gilets Jaunes (yellow vests), while facing dramatic (un)popularity numbers, his En Marche movement seems to have lost momentum in both France and Europe. But Macron has surprised people before, and French politics is extremely volatile these days. Hence, while Macron might look like a side story now, a good result in the European elections could reestablish his power in Paris and make him kingmaker in Brussels. Moreover, with a Francophile just elected new leader of the Christian Democratic Union (CDU), and therefore frontrunner to become the next German Chancellor, we might even see the re-emergence of the Franco-German engine.