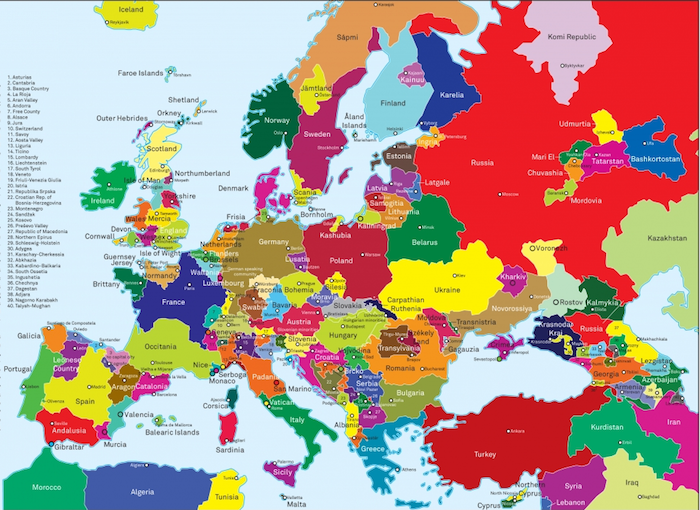 A map of Europe’s separatist movements

A design firm has imagined what Europe would look like if all its separatist and nationalist movements would succeed. The result is a Europe more fragmented than ever.

There have always been separatists and independence movements in Europe, but they seem to have gained momentum lately. In the past few days Scottish first minister Nicola Sturgeon announced she was willing to organise a new referendum on Scotland’s independence from the United Kingdom. The former president of Catalonia, Artur Mas, has been recently condemned for organising a popular consultation on his region’s independence in 2014 that was not recognised by the Spanish government.

A couple of years ago the Austrian-Dutch architecture and design firm TD pictured for Mark Magazine what would Europe like if every separatist movement should succeed in its struggle. According to this scenario only a handful of countries would be unscathed, with the rest split in two or more entities relating to linguistic or regional boundaries.

The creators of the map, Theo Deutinger, Filip Cieloch and Lucia de Usera, don’t specify which sources they have been using to identify the possible partition lines within existing countries: some independence claims are well known (as in Catalonia, Scotland or Flanders), other are less visible or even absent. Among all cases shown in the map, only a few are actually in a position to succeed. Many movements have few followers, are not well organised or are more interested in putting forward some cultural specificity than in actually breaking away. This map is therefore more a stimulating mental exercise and it does not pretend to realistically show how Europe’s future borders will look.