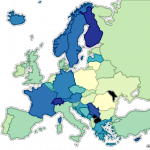 A map of gun ownership in Europe

This interactive map shows the firearms possession rate per 100 inhabitants. Although they are far from reaching rates found in the US, Europeans are by no means unarmed.

Every time a mass shooting takes place somewhere in the world, and especially in the United States, like the recent attack in Orlando, Florida, the media – rightly – points the finger on the weapon’s availability in the US.