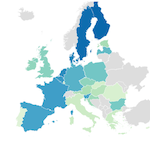 A map showing the power gender gap in Europe

These map and chart, based on the 2012 Gender Equality Index, show the representation of women and men in decision-making positions in EU countries.

According to the Index' authors,

Gender-balanced representation in positions of power is crucial from a gender equality perspective: firstly, from the point of view of social justice, regarding the equal access of all and secondly, from a democratic point of view in terms of the importance of reaching a balanced representation of society as a whole. It is also necessary to consider the potential of women’s increased presence to disrupt and change institutional practices, when they access domains previously dominated my men, which in turn can effect positive changes in society.

"Women, compared with men, are grossly under-represented in some parts of political and economic decision-making", write the authors, though noting that

while slight increases in women’s political representation are visible in the period from 2005 to 2012, men remain over-represented in ministries, parliaments and regional assemblies. […] There is a significant dearth of women and an excess of men in representation in the political sphere, and this is even more pronounced in the economic sphere. Men are greatly over-represented among board members in the vast majority of Member States, with women accounting for more than a fifth of members in only a few. Men’s over-and women’s under-representation in economic decision-making is even more amplified in the context of the decision-making bodies of central banks. Men’s over-representation is considerable, with women not being present in these decision-making bodies in about a fifth of Member States, with trends over time indicating a further decrease, rather than an increase.

This is why, the authors conclude,

It is crucial to address these democratic and economic gaps to ensure that gender equality is seriously promoted by and addressed throughout policy in Member States and that both women and men are involved in the recovery following the current economic crisis.