A week in hell

What with the general strike, violent anti-austerity demonstrations and a European summit to seek yet another solution to the debt crisis, Greece has its work cut out. And its partners are doing little to make a bad situation better...

A scene during clashes between protesters and police outside the Greek parliament, Syntagma Square, Athens on October 19. 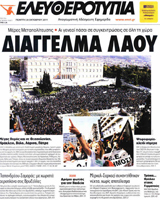 This Thursday will be another “hellish” day for the government. After the resounding “no” chanted by the thousands of Greeks who took part in yesterday’s demonstrations in Athens and towns across the country, the socialist majority in parliament will have to approve a futher austerity package.

Although this majority approved a preliminary reading of this legislation, there is a possibility that it will not pass. For proof, look no further than the group of MPs who were ministers [under George Papandreou] who have announced that they intend to vote “no”.

The pictures of yesterday’s crowds and the extensive support for the strike have the government quaking in its boots. At the same time, they will have to do all they can to push through the latest austerity legislation so they can travel to Brussels well armed for Sunday’s European summit, where the extent of the write-off of Greek debt and the future of the country for several years to come will be on the negotiating table.

Greece’s fate may be sealed on Sunday

This Sunday will be another “hellish day” for Greece, but also for Europe’s member states which will have to demonstrate that they have the capacity to overcome the threats that the crisis has engendered for the Eurozone, and elsewhere.

Italy is already under threat along with Greece, as are Portugal, Ireland and France, which is now being targeted by the ratings agencies. And this should set alarm bells ringing for the EU.

At the same time, the overall threat to the European project has been highlighted by one of the founding fathers of Europe, who has deplored the poker game played by Merkel and Sarkozy, who should understand that rescuing Greece is a way to save Europe. He tried to show that Europe is not threatened by member states that have difficulties with debt, or at least not solely threatened by the countries. But that Europe is threatened by countries that no longer adhere to the spirit of Europe at a time when European structures are changing.

Greece’s fate may be sealed on Sunday in Brussels, at a meeting that will decide on the destiny of future generations. But the fate of the Eurozone will also be decided, unless, when it comes to the crunch, Europe’s leaders decide to prove Jacques Delors wrong.

The risk of chaos

On 19 October, “the anger of the people” reverberated across the entire country, remarks To Ethnos, which estimates that there were 200,000 demonstrators. With the general strike set to continue on 20 October, in particular in the public and semi-public sectors, columnist George Delastik notes that “the rift between the state and the Papandreou government is continuing to grow." "The permanent climate of social and political instability could degenerate into uncontrollable chaos," he continues, after clashes in Athens on 19 October, while the Prime Minister "appears as a leader as a fin de régime leader."