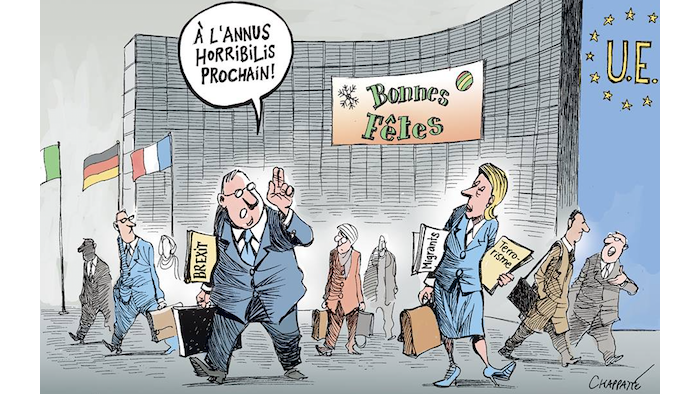 A year of upheavals

The lack of vision and inability to act together shown by Europe’s leaders has characterised a year marked by several crises that have violently shaken the continent. We need a fresh burst of solidarity and cooperation, argues a French economist.

"See you next annus horribilis!"

We are entering the final days of 2015, and thankfully so, since it has certainly not been the happiest of years.

It has been a year of upheaval of every kind, what with crises posed by the climate, terrorism, migration, the economy and, last but not least, political turmoil.

But in fact, each of these upheavals were foreseeable. And for each one there are potential solutions that our political leaders – throughout the world and in Europe itself – were not able to implement. Let’s examine two examples.

Since the dawn of the industrial era, global temperatures have risen by around 0.8 °C. That may not seem like a lot. But, according to the UN, 90% of natural disasters are currently linked to the climate. Since 1995, this has claimed 606,000 lives and affected 4.1 billion others. Over the first six months of this year, some 16,000 people lost their lives and climate disasters cost the global economy an estimated 40 billion euros.

COP21 was a success, inasmuch as the agreement made in Paris will enable the world to limit warming to 1.5 °C by the end of the century. But we must still wait to see how the agreement will be put in place. The text has yet to be ratified by the signatories, certain restricting measures are still in suspense and aid to the poorest countries will perhaps only come by 2020. And there is no question of decarbonisation.

Energy policy in Europe has centred on environmental protection, and this represents a striking victory. However, it is up to each country to decide on its energy mix, and so on whether to continue using coal.

But, if the impact of a 0.8 °C warming is already so dramatic, what will it be like when this doubles – the target agreed upon in Paris?

Islamist terrorism, the other major problem of 2015, is also familiar territory. It has been developing across the world for over twenty years, spreading from the Middle East, North and sub-saharan Africa.

More than thirty islamist attacks have occurred since the start of the year, with nine alone in Europe, claiming 152 victims here and 1087 elsewhere in the world. Since 9/11, despite the wars in Afghanistan, Iraq and Libya – and their dubious outcomes – very little has been done to tackle the problem seriously. We are lacking global strategies and effective instruments for cooperating.

In Europe we have various ways of working together at our disposal, like the SIS, Interpol, Europol, Eurojust. But they are not enough, because member states refuse to cooperate wholeheartedly. Gilles de Kerchove, the European counter-terrorism coordinator, has observed with some bitterness that we have valid and insightful intelligence, but are still missing the will to cooperate and implement a joint policy. He claims that 95% of all responsibilities remain at the national level.

And we could make the same point about the management of migratory movements, given the number of deaths as people struggle to reach Europe and the impact of these new arrivals on European communities.

When faced with the apparent inabilities of Europe’s political elite to act effectively, when faced with the power of a globalised finance industry – which definitely does not have the public interest as its top priority – it is no surprise that electoral abstention has become the major political choice and that voters’ fear and anger has translated into the growing success of nationalist, anti-European and xenophobic parties.

We must not forget that all dictatorships are born from crises and that they have come to power democratically. We urgently need democratic parties to change direction if our fragile democracies are not to be overcome by these upheavals. These will require Europeans to show more solidarity and cooperation.