Report Czech Elections
'For that our children want to live here too' – An electoral billboard for Andrej Babiš' ANO party. 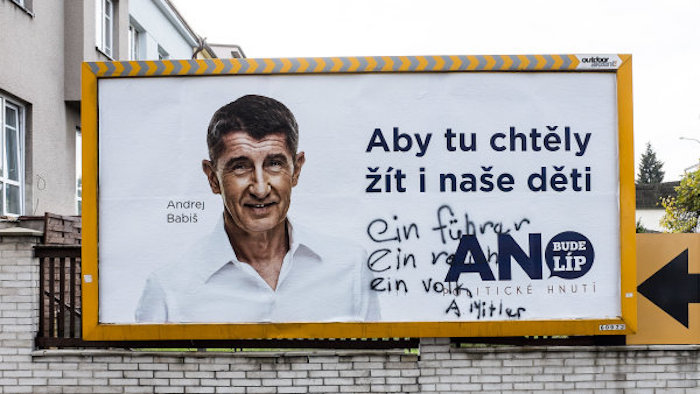 Another Central European experiment with democracy

Popular billionaire and flamboyant populist candidate Andrej Babiš is leading the polls for 20 and 21 October general election. His opponents are so weak that his main challenger is a far-right nationalist party. Is Czech Republic on its way towards a Hungarian scenario?

'For that our children want to live here too' – An electoral billboard for Andrej Babiš' ANO party.

On Saturday 21 October the Czech Republic may follow the course that Poland under Jarosław Kaczyński and Hungary under Viktor Orbán have already set on, i.e. from a full-fledged democracy of the western type to an authoritarian regime of an eastern character. While such a system still allows for elections and something like an opposition is still tolerated, the mass media operates only in a very limited form, the judicial system is selective and judicial and police authorities are subordinated to a narrow group, competition among political parties is not fair and access to information that is unfavorable to the ruling parties is limited.

Unlike Russia and other dictatorships of the post-Soviet type, Orbán’s and Kaczyński’s projects have not yet reached their objectives and are still moving within the European Union. Nevertheless, their trajectory is distinct.

The Czech Republic, which had already contributed to the list of methods used for misappropriating state assets in the beginning of the 1990’s by its fraudulent and unique “coupon” privatization, is now getting ready to contribute, in a similarly original way, to the deterioration of Central European democracies. Its contribution lays in the leadership of Andrej Babiš, a dollar multibillionaire and, with his net worth of 88 billion crowns, the second richest Czech (this is actually a contradiction since Babiš is originally a Slovak, born in Bratislava).

Even his ANO movement has not been built as a classic political party, but as a single man company. For example, Babiš makes no secret of the fact that he personally pays some of the movement leaders and that there is no alternative to his leadership.

Babiš intends to run the entire country “as a company”. Even though ANO’s election program seemingly looks like the program of a standard political party, Babiš has, at the same time, published a book (several hundreds of thousands copies of it) “O čem sním, když náhodou spím” (What I Dream about when I Have Time to Sleep). The book is presumably much more important than the program prepared by mere “employees”.

In the book, Babiš describes his plans for the transformation of all areas of life of the Czechs (but also of the EU). Nevertheless, according to political scientists, the most important thing the book shows is the fact that Babiš plans to fundamentally weaken the country’s democratic system. “Some of the visions could lead to dismantling of representative democracy in the Czech Republic,” says political scientist Tomáš Lebeda from the Department of Politics and European Studies of the Palacký University in Olomouc. He mentions, for example, Babiš’s proposals to dissolve the Senate, to introduce a one-round majority system, and to disband regional as well as municipal authorities. “This is an extremely dangerous cocktail. Should most of these proposals be simultaneously pushed through, representative democracy in this country would be really dismantled,” adds Mr. Lebeda.

However, this is just one part of the problem. The other part is the interconnection of the business activities of Mr. Babiš with his political and government agenda. His Agrofert Group employs tens of thousands of Czechs (and thousands of Germans, Poles and Slovaks) and practically controls a large part of the Czech agriculture, food processing industry, chemical industry and even the media.

Even now, before the coming elections, with ANO being the second strongest party in the government and Babiš himself being the Deputy Prime Minister for three years, until he was removed from his office due to a financial affair related to his farm Čapí Hnízdo in the spring, the emerged concentration of economic, political and media power has never been so great anywhere else in Central Europe. This situation was not altered much even when Babiš was forced to transfer his businesses to trust funds in the spring of this year. He still maintains real control over them.

Thanks to his control of the media (Babiš owns MF DNES, the largest respectable newspaper, the Impuls radio station, which has the most listeners in the country, and IDNES, the second largest news server), weakness of the remaining Czech democratic politics, left by the strong generation of 1989, and support of Kremlin-connected president Miloš Zeman, Babiš is a clear favorite of the October elections. Even the fact that the police charged him with obtaining a fraudulent grant of 50 million crowns, i.e. almost 2 million Euro, from the European Union funds has not weakened his support. If found guilty, Babiš could be sentenced to several years in prison. However, president Zeman has already announced he will name him the prime minister even should he be in custody.

In return, Babiš has delighted the president by declaring that lifting the sanctions against Russia, introduced in retaliation of the country’s occupation of Ukraine, needs to be reconsidered.

Yet another important issue that is helping Babiš is the ongoing anti-immigrant hysteria. Babiš, a “strong leader” who disapproves the “multicultural West” and Islam itself, has been populistically riding this wave as well.

Apart from slogans of the “YES – we will be better off” type or the already mentioned “managing the state as a company” motto, Babiš’s program is very chaotic. One thing is for sure, though. His cabinet would not be pro-European and introduction of the Euro would be “put on ice”. Nevertheless, experts believe that these issues are just some of the less important things. The real danger lays in the fact that should ANO manage to put together a single-party majority government, the present form of democracy in the Czech Republic would be threatened and the country may disassociate itself from the West, political system and culture of which Babiš intends to dismantle in the Czech Republic. “There is a dinosaur hatching here from the egg. This dinosaur could destroy everything that has been democratic here,“ warns political scientist Bohumil Doležal.

Babiš and the Czech far-right

An old Czech saying applies to the Czech elections nevertheless: “It is never that bad that it could not be worse.” Strana Přímé Demokracie (Direct Democracy Party) is battling for the second or third place in the election, potentially drawing way over ten percent of the vote. The party, led by half-Japanese Tomio Okamura, is openly xenophobic and many of its features assemble a fascist party with a strong leader. His posters promise ban on Islam and secession from the EU. Resemblance to the Hungarian situation, where the neo-fascist Jobbik represents the main opposition to Orbán, is quite obvious. Yet another antidemocratic phenomenon on the Czech political scene is represented by the communists who have been immune to any kind of reform for the last 25 years. Their pre-election preferences exceed ten percentage points. Apart from other things, they call for the country to leave NATO.

There are four quarrelling “democratic” parties that stand opposing these forces – the social democrats, who currently dominate the government; the Christian-democrats; TOP 09; and the eurosceptical Civic Democratic Party. Despite the fact that these parties, to a considerable extent, understand the threat that Babiš represents, they have not been able to form a joint block against him. It appears that even if the electorate gives them the chance, they would not be able to form an “anti-Bolshevik” government. They are under the false impression that if Babiš proves to be such a fundamental problem, they can unify to resist him the next time around.

The next election, however, may be conducted based on a completely different set of rules (similarly to Hungary, Poland or Putin’s Russia) and the winner may be decided in advance. It is thus probable that an experiment with democracy is afoot in the Czech Republic as well. The efforts to persuade voters not to give Andrej Babiš a chance to become the head of the country seem to be going nowhere, even though hope does not die until the election time — possibly the last fully free Czech elections for a long time to come.