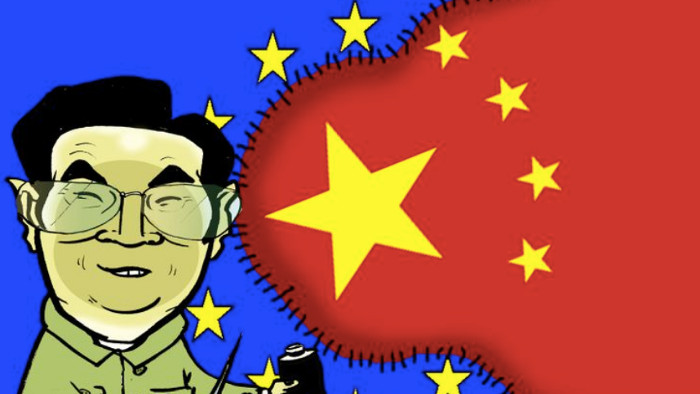 Are Chinese tech companies bluffing their way into the EU?

Locked for years in digital alienation, the EU has set a new standard on data protection and privacy, wrestling back some control from Silicon Valley. But with the coming of age of AI-based applications, Chinese firms strive in turn for a piece of the colony.

Seven years. It’s about what it took for Chinese AI startups, after catching the wave of the deep-learning revolution, to muster their forces. Reaching the point of Critical Mass, with a peculiar skill in computer vision – a set of techniques enabling computers to “see” and “understand” digital images – they’re expanding across countries part of the Belt & Road Initiative (BRI):

In Malaysia, SenseTime – the world highest-valued AI startup – is taking part in the construction of a $1 billion tech park in Kuala Lumpur, while upgrading the state’s surveillance capabilities.

In Pakistan, Megvii – which is filing for an IPO in Hong Kong – is setting up facial recognition systems in power plants, and has launched “smart” factory projects in Japan and South Korea.

Meanwhile, in Africa, CloudWalk runs a large-scale facial recognition program along the Zimbabwean government, gaining access to national databases of millions of faces.

They are backed, in their efforts, by the Digital Silk Road, a $200 billion investment in digital infrastructure launched by Beijing in 2017, in an attempt to incorporate large swaths of Asia, Africa and parts of Europe under a single digital umbrella, underpinned by a global network of deep-sea Internet cables (including a 6300 km of fiber-optic between Pakistan and Djibouti) and covered by BeiDou, the Chinese satellite positioning system.

Chinese players in AI, after all, are exceedingly well-financed; better funded, for instance, than their European counterparts, having secured more venture capital and private equity in 2017 alone than the latter over the last three years, according to CB Insights.

They benefit moreover – tremendously – from the latest refinements of the Police State: China’s four AI unicorns (SenseTime, CloudWalk , Megvii e YiTu, valued at more than $1 billion) are all feeding off lucrative government dealings, by taking part in a pharaonic surveillance program to keep an eye on 1.4 billion people.

Last but not least, they get access to more data – of which a vast amount is required to develop useful AI algorithms – mainly due to the fact that China has more netizens and Internet of things devices connected than anyone else.

That, however, is only part of the story.

Awash in cash, drowning in data and state-sponsored, Chinese players may benefit, moreover, from our own gullibility:

For all its structural strengths, indeed, China is far from winning by any measures in Artificial Intelligence. In fundamental research, for instance, Europe and the US have more top AI scientists publishing in leading outlets than China (5,787 and 5,158 respectively, against 977), according to a report published in August by Center For Data Innovation (3). In hardware, similarly, the semi-conductor and AI chip industries are mostly in the hand of US-based manufacturers (3).

Nevertheless – and so consistently – China is being described, in Western media, as an unstoppable force touched by destiny to ineluctably become the world-supreme A.I. omni-power :

‘Why China will win the global race for complete AI dominance’, Wired, April 2018.

‘How China’s Rise as AI Superpower Could Reshape the World’, Fortune, September 2018.

‘Why China May Be the Next AI Superpower’, Medium, November 2018

Such a narrative (or propaganda? The PCC, after all, wouldn't slash $10 billion/ year on soft power just for the heck of it), by incepting the idea – in, say, the minds of municipal decision-makers, anxious to stay abreast with “smart city” innovations – that China’s expertise in AI is unique and indispensable, may play a role in its success overseas.

Fake it ‘till you make it

To see this, take DeepBlue Technology, a Shanghai-based, former milk powder trading company turned AI expert, after changing its name in 2017, when it started working on various AI systems using computer vision, and which is now selling cleaning robots to Chinese airports, train stations and hospitals.

Like its rivals in China, it has managed to swiftly raise a large amount of capital; receiving, between 2017 and 2018, hundreds of millions of dollar from Tsinghua X-lab, CBS holdings, YF Capital, Desun Group, Meridian Capital, Greenland and CICC, an investment bank linked to the Chinese government.

Like its rivals as well, it’s coming up with an expansion plan, gaining a foothold in Southeast Asia via Thailand, while homing in on Europe, where it expects to rollout its “smart Panda bus” – its flagship product – a self-driving vehicle equipped with palm vein pattern recognition and hailed, by its manufacturer, as a tech marvel.

Unlike its rivals, however, DeepBlue Technology is strikingly off-the-mark, when it comes to clarity and transparency:

It has remained surprisingly elusive, for instance, about its dream-team in research & development. Except a vague, unverifiable claim of employing “more than 100 PhD and postdocs” as of November 2018 – up from “30 PhD and postdocs” only five months earlier – Chinese journalists have been at a loss, so it seems, to collect any credible information about the detailed profiles of DeepBlue’s leading engineers and scientists.

More bizarre still, are the exuberant statements made by DeepBlue’s leadership time and again in Western and Chinese media, as to the advancement of its products and services.

In November 2018, for instance, vice-president Liu Feng-Yi stated the company’s self-driving bus was already operating in 200 cities in China and 500 cities worldwide, reiterating a claim made a month earlier on the website PR Newswire. According to the Financial Times, however, as of August this year, DeepBlue’s “smart Panda bus” is trialed in 10 Chinese cities and “expected to be in 10 more by the end of 2019”, including, hypothetically, Bangkok and Athens.

That doesn’t seem to be problem for DeepBlue, whose excursion in Europe seems to be cutting through rather effortlessly:

Last year, in Luxembourg, it opened three joint laboratories along the House of Financial Technology (LHoFT), said to be focusing on fin-tech, smart factory and self-driving.

Since last March, in Italy, it is collaborating with the Fondazione Magna Grecia, striving to “accelerate the digital transformation of Italian cities through Artificial Intelligence” (while complying, needless to say, “with all European privacy requirements”); and has announced the creation of a Sino-Italian fund to invest in European startups.

Last June, in Greece, during an event in Athens called “Chinese AI arrives in Europe”, the “global leader in AI-based applications” – as reported by local media – trumpeted the arrival of its latest innovations in Europe, which are “set to radically change public transportation, payment methods, retail and the overall urban environment”, while promising to its partners “investments”, “jobs creation” and “transfer of technology”.

‘All warfare is based on deception’ - Sun Tzu, The Art of War

Sooner or later, all followers of the “Fake it ‘till you make it” strategy wind up as a glorious success, a deplorable scandal or a buried failure. Guess is that, with the rising influence of China in AI standardization bodies – paving the way for a smooth adoption of its applications the world over – and the absence of sizable European players in AI-based customizations, things could unfold very quickly.

All the more so, as – gradually – while pursuing their own global agenda, Chinese tech heavyweights are reaching deep into the digital infrastructure of Europe:

Huawei, which had set up 23 R&D across the Union, according to [a report by MERICS](http://merics.org/en/papers-on-china/chinas-digital-rise), has signed 28 contracts with telecom operators in Europe, suggesting the possible deployment of its 5G networks in some member states. Alibaba, anticipating the rise of AI and its huge need for data storage and processing power, is upgrading its cloud capacities on the continent, by opening two new data-centers near London.

Meanwhile, Chinese investors have been keen to invest in European startups in AI-intensive industry, such as fin-tech:

N26, for instance, a German direct bank operating in the Eurozone and the UK, [has raised](http://techcrunch.com/2018/03/20/n26-raises-160-million-from-tencent-and-allianz/) $160M in a Series C round of funding led by Chinese Tencent and German insurer Allianz in 2018.