Report Europe and the coronavirus 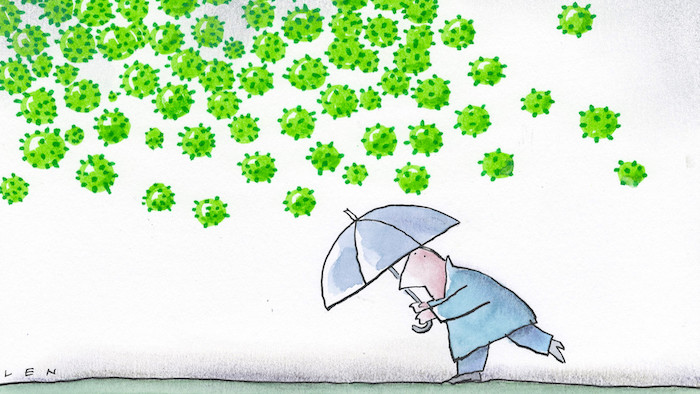 Report Europe and the coronavirus

Bracing for the pandemic

As the COVID-19 gets a foothold in Europe, health services are being put through their paces. Are they up to the job dealing with the unpredictable enemy?

As social media posts circulate about empty supermarket shelves and hand washing strategies, politicians around Europe are trying to tread a fine line between averting panic, while also gearing up for a potential health crisis.

In Italy, the first European country affected by the fast-spreading coronavirus, hospitals have faced an influx of patients and hotlines were overwhelmed by uncertain citizens. Other European nations are watching developments closely - taking notes on how to respond to a similar outbreak at home. The European Centre for Disease Control (ECDC) has warned there remains a moderate to high chance of coronavirus clusters like those in Italy occurring elsewhere in Europe, pointing out that there is the potential for bottlenecks within healthcare systems.

Hospitals and medical services are on the front line of tackling the outbreak. COVID-19 tests, separate wards to isolate suspected cases and masks are all in high demand. There is also a spike in demand for doctors and carers, as well as intensive care beds for the minority of patients who suffer organ failure.

As nations scramble to draw up action plans, it is evident that European medical services vary widely in the breadth and success of their health provision, as shown by the Bertelsmann Stiftung's Sustainable Governance Indicators (SGI) 2019 survey on health policy response to the question “To what extent do health care policies provide high-quality, inclusive and cost-efficient health care?” It finds that almost two thirds of the countries largely meet the criteria of quality, inclusiveness and cost efficiency. But ten countries only partly meet these standards. Lowest on the league table is Hungary, which scores only three out of a possible ten points, with a health care budget which is one of the lowest in the OECD and spending per capita at just around half the EU average.

Although the World Health Organization has stopped short of labelling it a pandemic, the virus is moving fast, aided by the interconnected economies of the block. After arriving in northern Italy, by March 5, a total of 19 of 20 Italian regions had been affected and 107 people had been killed by the virus, prompting Prime Minster Giuseppe Conte to warn that the health service risked being overwhelmed.

As cases of the disease - and public anxiety – climbed, Commission President Ursula von der Leyen, launched the executive’s corona response team, a group of five EU commissioners who will coordinate work. She underscored that the “complex” situation required both “swift action” and “strong coordination” both on the EU level, and among individual governments.

On the national level, France has prepared 108 hospitals, with at least one in every region, enabling them to isolate and care for coronavirus patients. Testing services in hospitals in Paris and Marseille have capacity to monitor 1,400 patients per day, according to Health Minister Olivier Veran. In Germany the health ministry has allocated 23 million euros to its coronavirus response. The NHS in the UK has also drawn up an action plan, though questions remain about whether the hard-pressed health service, which has seen spending cuts since the financial crisis in 2008, will have capacity for a sudden surge in patients.

Illustrating the quality cleft between health services around the bloc, Eurostat data shows how the UK has around a third of the number of hospital beds as Germany, one of the European leaders in healthcare. The latest SGI report on the UK depicts a health service with limited slack in the system: “Winter health care “crises” have become the norm as hospitals struggle to cope with emergency admissions and have to cancel routine operations to free bed-space… New reports regularly refer to a service which while offering excellent clinical care, often struggles to cope.”

Heath officials, including intensive care doctors in the UK have publicly warned that the system is inadequate to deal with the coronavirus, which can be life threatening for the elderly and those with underlying health conditions. This week the UK’s official strategy has shifted from containing the disease, to trying to slow its spread. In effect, this is an admission that disease has spread so much that it is impossible to track chains of transmission. Now the approach is to try and slow the numbers of people needing emergency care, shielding a health service struggling to cope with the numbers flu patients.

For its part, The European Centre for Disease Control (ECDC) has warned that health services around Europe could suffer if the virus coincides with the influenza season. “This would be exacerbated if substantial numbers of healthcare workers became infected,” it wrote, surmising that: “Containment measures intended to slow down the spread of the virus in the population are therefore extremely important”.