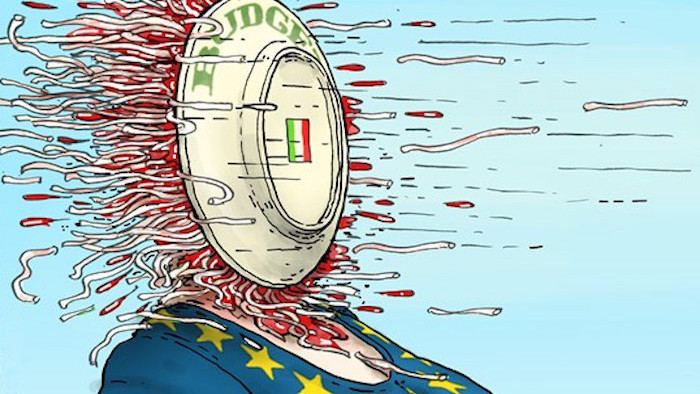 Italy’s government, especially the populist Five-Star Movement (M5S), is on a collision course with the European Union. Where is the communication breakdown headed?

This tension between democracy and law is perhaps nowhere more evident today than in Italy. The Italian government, and in particular the populist Five-Star Movement (M5S), was elected on far-sweeping economic promises: to provide more job security and a universal basic income to all Italians. Even partly implementing its plans would break EU rules limiting budget deficits - rules that Italy signed up to.

This leads to a Catch-22 situation which places the European Commission in an awkward spot. On the one hand, the EU must make some show of enforcing the rules - to avoid rendering them meaningless. On the other hand, in the eyes of Italian people, Brussels is unlikely to score a political win following a coercive struggle with Rome.

The commissioners have tried to explain in measured language their rejection of the Italian budget. The populists have flamboyantly denounced Brussels’ ‘interference’ in Italian affairs (one nationalist Italian MEP even squashed the EU budget commissioner’s notes with his shoe) and they have some reason to do so: such action resonates with many Italian voters and the Italian government feels they have a democratic mandate to do what they are doing.

The M5S, an ideologically vague organization, wants to deliver for their voters. Southern Italy and young people in general suffer from massive unemployment and precarious employment. As the Bertelsmann Stiftung’s Sustainable Governance Indicators (SGI) report for Italy notes, the Italian economy is characterized by “polarization between protected sectors and those that are largely unprotected and precarious. While older workers in the public sector and in large firms of the private sector enjoy sufficient and, in some cases, even excessive protection, young people and in general those working for small private sector firms are much less protected.”

The M5S seeks to change this via new employment rules but economists generally consider that those will likely backfire. The so-called Decreto Dignità, a regulation aimed at protecting labor, asked for by M5S, will effectively make short-term contracts more difficult, thus likely boosting the cost of labour and lowering job creation.

All this suggests Italy will continue to suffer from the economic stagnation which has characterized the last 15 years. The nation had made progress under previous governments, according to the SGI’s indicator for economic policies, which rose from a low point of 4.7 in 2014 to a middling 5.7 in 2018. These tentative gains may now be reversed.

The M5S’s coalition partners, the nationalist Northern League (LN) led by Matteo Salvini, has been even more successful since coming into office. Salvini has not only cracked down on immigration but has also loudly opposed Brussels’ budgetary rulings. Support for the League has risen to over 36% (more than twice what they received at the March 2018 elections), while Salvini’s personal approval rating has reached 60%. This astonishing rise suggests Brussels is unlikely to win a head-on conflict with Rome: if the M5S-LN government falls, new elections would probably lead to an even more nationalist government under a significantly more powerful Salvini.

And the populists, meanwhile, can also point to the EU’s highly-inconsistent track record in enforcing these rules. France and Germany notoriously violated the brand-new eurozone’s deficit rules in 2003, without facing any fines.

Despite the drama between Brussels and Rome, the truth is that the current situation may actually prove sustainable, at least for a few years. While interest on Italy’s debt costs the average Italian a whopping €1,000 every year, the Commission’s own economic forecast suggests that an increase in the deficit will not significantly increase the country’s debt-to-GDP level. Italy is forecast to achieve over 1.2 percent growth annually over the next two years and unemployment is expected, finally, to fall under 10 percent.

Too big to fail

Furthermore, no one has an interest in a showdown which could lead to Italy’s being locked out of international financial markets and ultimately default, as occurred with Greece, which would likely mean yet another recession in the eurozone. It is true that foreign banks’ exposure to Italian debt has halved in recent years, with a massive reduction in cross-border investment: German banks now own about $100 billion in Italian bonds and French banks ‘only’ $300 billion. Still, after Brexit, Italy will be the EU’s third-largest economy and no one can afford for BNP Paribas or Société Générale to go belly-up. Italy remains too big to fail.

But in the near term, there may be growing tensions within the ruling coalition. Just as Europe is divided along north and south, so is Italy. The League represents the economically dynamic north, with its business interests both large and small, while the Movement represents the chronically underperforming south, which wants more funds from the central government. Salvini may eventually decide to ditch the M5S so as to govern in a more natural coalition with conservatives and other nationalists.

In truth, there is considerable continuity between the populist government and previous administrations. Already under the centre-left Prime Minister Matteo Renzi, Rome had loudly opposed Brussels’ austerity measures and had even begun to eliminate illegal immigration in the Mediterranean (of which Italy has borne the brunt in Europe since the disintegration of the Libyan government). The new government has built upon and radicalized these precedents.

On paper, the eurozone’s monetary and budgetary rules, favoring balanced budgets and low inflation, have a virtually constitutional character. However, in any democracy, a constitution is only respected insofar as its values have sunk deep into the heart of the people. In the United States of America, the prestige of the Founding Fathers and of the ideal of liberty means that, for better and for worse, free speech, gun ownership, and private enterprise are far more respected there than in other parts of the world. In Europe, the “eurozone constitution” really dates to the 1992 Maastricht Treaty, whose principles reflected a conjunctural and awkward Franco-German compromise, rather than the shared fundamental values of the nations fusing their currencies together.

If European democracies are to respect the rules of their shared currency union, more must be done to explain the core values which underpin it. Certainly, in this age of financial instability and environmental degradation in the pursuit of perpetual growth, the values of living within one’s means and sustainability ought to have a widespread appeal.