Ideas The EU and the Covid-19 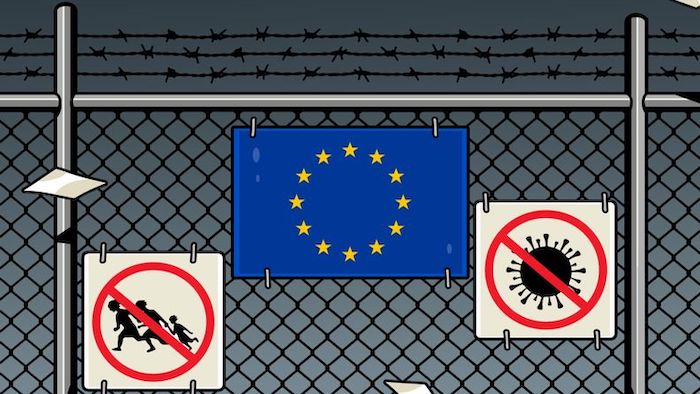 Ideas The EU and the Covid-19

Can borders stop the outbreak?

While the EU may not have any jurisdiction in matters of public health, it can facilitate coordination between member states so that border security can identify and isolate infected people, and allow the movement of patients from one country to another to ease pressure on overcrowded hospitals.

In 1588, Montaigne, recounting his journey across Europe, describes his physical and metaphysical concerns in a time of plague. The only real borders in Europe at the time were those formed by nature: a hill, a river, etc. There were also walls, serving as protective belts. The plague formed a much more formidable border, barring access to the infected city and inspiring fear of quarantine, a curative confinement.
“Here is yet another misfortune: outdoors and indoors, I was beset by the plague, the most violent plague of them all. […] I have to endure this bizarre situation: the very view of my home has become frightful. […] And the worst thing is that, according to the rules of medicine, for every potential danger, you are required to remain forty days in thrall to uncertainty – the imagination torments you at will, making you feverish, despite your good health!” (Essays, III, Chap. III)

While the time of the plague has long since passed, the coronavirus makes us ask once again if the border should be viewed as a protective shield. Is it still such a “bad good idea” to erect borders against the spread of this new and currently untreatable disease?

The European Union and borders: saying the unsaid

Europe is built on the utopian idea of abolishing borders; it has continually strived for their gradual devaluation. Crossing a European border no longer involves long waits and fastidious, arbitrary searches. But now the EU has to redefine the function of borders. In 2019 it already considered its external borders protective filters for goods arriving from outside the EU. Now it must define these borders differently: as a health and safety mechanism of the utmost importance. In this regard, the EU has been overtaken by its Member States, who were quick to order the closure of their national borders as the threat of COVID-19 became clear.

COVID-19 is dividing the European Union

From the constitutional perspective, there’s nothing unreasonable about Member States taking responsibility for public health and protecting their populations. This has always been their responsibility within the EU. The intersection of health care and freedom of movement has been an issue since the Treaty of Rome in 1957. When the concern is for the health of the population, Member States have always been allowed to control who crosses their borders. For example, article 45 of the Treaty on The Functioning of The European Union (Treaty of Lisbon, in force since 2009) provides that the free movement of workers can be limited for reasons of public health. Article 29 of directive 2004/38 provides an exception to freedom of movement, and the possibility of expulsion, for carriers of potentially epidemic diseases or contagious parasites. It also establishes a mechanism authorising member states to demand medical certificates from those wishing to visit or work within their territory.
The Court of Justice of the European Union, based in Luxembourg and charged with interpreting EU law, agrees that member states should have responsibility for public health matters. The Member State, in its view, should decide on both the level of health protection and any measures put in place.
When it comes to combating the novel coronavirus, this permits the closure (or non-closure) of borders, the confinement (or non-confinement) of the population, or obliging (or not obliging) the population to wear masks and undergo tests. These measures can all be justified as long as the aim is to to protect public health. The EU Court of Justice tries to ascertain, in each case, whether less stringent (though no less effective) measures can be put in place by Member States to achieve the same ends.
Are border closures an effective way to protect public health? This question is undoubtedly going to arise in a national or European courtroom. In any case, there is a certain proportionality in how the borders have been enforced – for example, cross-border workers are still allowed to cross the closed borders.

What do Member States aim to achieve by closing their borders?

On 16 March 2020, the European Commission published a communication on border management during the COVID-19 epidemic. This is a long way from the “religion of open borders” denounced by Marine Le Pen. The communication reminds member states of their responsibilities in matters of public health, and provides guidelines for proportionate management of national borders. In case of “extremely critical situations”, Member States can temporarily reintroduce internal border controls. This had already been experimented with in the Schengen Area during the migrant crisis of 2015, and the terrorist attacks of the same year. Once again, nations must reassume control of their borders in order to protect the health and safety of their populations.
For the Commission, the national border becomes a filter preventing those who appear sick to cross and become vectors of contagion. This doesn’t mean closing the border and turning away the sick, but rather providing non-discriminatory care and isolation in the country of entry. This provides a legal basis for the quarantining of people arriving from sites of infection. Member States cannot use borders to make travel more difficult or discourage movement, if only because the creation of bottle-necks is highly conducive to the spread of contagion.

What does it mean to close the border?

The closure of borders cannot merely be declared by the Member State like a mantra, a magic word to dispel the virus. It can only be effective if borders become sites of reinforced controls serving to limit the spread of infection. In any case, the Commission does not talk about closing national borders, but rather specific measures for when they are crossed.
In order for these measures to be effective, careful coordination is required. Strengthening checks on people crossing the border between Austria and Italy, or halting a train, does nothing to combat a health crisis if no further measures are taken in either Italy or Austria. In other words, Member States cannot just hunker down behind their borders and trust in their protective functions.
During his first televised address on 12 March, Emmanuel Macron explained that there would “undoubtedly be control measures, border closures, but these measures must be taken as Europeans, at the European level, because it’s at this level that we’ve constructed our freedoms and protections.” In this regard, the European Union wants to give substance to the principle of solidarity between member states. It prioritises increasingly systematic coordination between member states by videoconference, but also, above all, by means of measures for managing the unprecedented health crisis. Some will say that these are “measurettes”, and that the EU is only showing its ineffectiveness. In reality, something deeper is at work.

But what is the European Union doing?

Many doctors on the front line in the battle against the coronavirus were quickly moved to anger by the absence of any “European health care”. It is true that the EU has no legal capacity to promote uniform measures to fight the coronavirus.
In the sharing of power between the EU and its Member States, the Member States take the reins when it comes to the protection of public health. The EU has jurisdiction over the harmonisation of national regulations, essentially guaranteeing the quality of medication. The EU can take action, but only as a “supporting competence”: that is, acting to “support, coordinate or supplement the actions of the Member States” in matters of public health.
The current crisis makes clear why a coordinated policy is in fact preferable to a uniform policy. Member States’ responses to the same crisis vary greatly, because the outbreak is different in each country (the degree of infection, hospital capacity, etc). There are even regional differences within individual Member States: for example, sections of the border in Germany were closed (between Bade-Württemberg and Alsace), while others remain open (between North Rhine-Westphalia and Belgium for example).
From these differences we can conclude that a uniform European solution is neither legally feasible nor objectively desirable. But this doesn’t mean that Europe is not taking action.

Deploying a range of EU policies

The EU acts beyond health policy, first and foremost to provide Member States with the means to confront the major economic crisis which will follow the health crisis. It is an unprecedented situation for whole sections of the economy to be put on hold, and for so many citizens to be placed under quarantine.
The European Commission is mobilising commissioners to coordinate a response to the crisis: along with president Ursula von der Leyen are seven commissioners focused on economic issues (executive vice-president Vestager and commissioners Breton, Gentiloni and Valean), health (commissioner Kyriakidou), borders (Johannson), and crisis management (Lenarčič). The Commission is also taking some unprecedented measures, such as suspending the stability and growth pact, allowing Member States to accumulate public debt and inject liquidities into the national economy.
The European Central Bank has also played its part by freeing up 1050 billion euro (after an initial effort that was judged too conservative).

The EU is not closing its borders, but rather transforming them into areas safeguarding European public health. Essential to this new discourse, and constituting a remarkable change, is the systematic control of every person entering the EU via its external borders. The borders are now “viscous”, so that infected people can be caught and isolated. Information is coordinated between Member States. The free movement of information can also be seen in the search for a treatment for COVID-19.
But while borders become filters for potentially infected people, they should still remain open for goods: freedom of movement is an urgent necessity when it comes to respirators, masks and medication. For similar reasons, Member States can still allow the sick to be transported across borders, for example when hospitals are overcrowded – as is the case with Bade-Württenberg receiving patients from Mulhouse.

Can we live without the internal market?

During his address on March 12, Emmanuel Macron claimed that “what this pandemic reveals is that there are goods and services which should be raised above the laws of the market”. This is a highly charged formula. The internal market will never be the same after COVID-19. The lack of a convincing response from liberalism (and the somewhat more effective response from the authoritarian regime in China) suggests that it may be time for systemic change, taking into consideration the negative consequences of “full-globalisation”.
When it comes to public health, the EU needs to find the resources to produce its own vital medicines, protective masks and respirators. In spite of everything, the internal market remains a necessity in this new world, because the virus goes beyond the local and even the national. Perhaps the coronavirus has managed to make European sovereignty a reality at last…