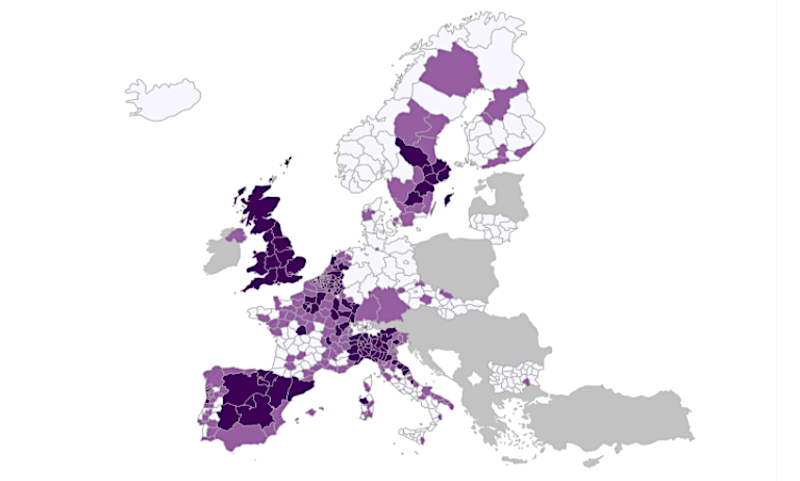 We have gathered data on excess deaths from 500 European regions to better understand the spread of the virus. Some regions report up to three times as many deaths as usual since March, but a large part of Europe has been able to live through the first wave of the pandemic without any significant excess death.

Borders are being opened and lockdown policies are lifted as the first wave of the coronavirus peters out. We are also getting a more and more comprehensive picture of the death toll of the pandemic so far.

Data from 20 European countries shows that over 200,000 more people than usual have died since March. In this article we will explore this excess death toll.

We have seen tonnes of national coronavirus comparisons in the last couple of months. But comparing nations easily becomes misleading. The spread of the pandemic is regional rather than national.

Our analysis shows that the deaths are very unevenly distributed geographically. To better understand the spread of the virus we have gathered data on excess deaths from 500 subnational regions, and we have discovered that the 50 worst affected regions account for just under half of all the excess – or “unnormal” – deaths.

Uneven spread in Italy and Sweden

Several Italian regions stand out when we compare regional excess deaths across Europe. Bergamo, in northern Italy, is one of the first places coronavirus took hold in Europe, and, up to the end of April, this province has had deaths many times higher than usual.

But corona’s spread across Italy is geographically focused to the north of the country, suggesting it has been relatively contained. Many regions in the south have had normal levels of deaths.

This chart shows how much excess deaths vary across Italy:

The picture is similar in Sweden, which has also been hit hard by coronavirus. The bulk of the country’s excess deaths have occurred in the capital region, where an unfortunately timed half-term break meant thousands were returning from the Alps just as the new disease was spreading there.

71 per cent more people than usual have died in Stockholm during the pandemic, higher than all but 31 of the 500 European regions we’ve analysed, and a similar level to Catalonia and Brussels. However, in large parts of Sweden the number of deaths has been normal or close to it.

A country that stands out with a rather uniform spread of the disease is the United Kingdom. Every region but one report significant excess deaths.

On the other hand, many regions go unaffected

136 of the 500 European regions (27 per cent) report a significant number of excess deaths. That is at least 25 per cent more deaths than usual during the pandemic. Another 158 regions report somewhat more deaths than normal.

While thousands of lives have been lost, it is noteworthy that nearly half of all regions in the 20 analysed European countries have recorded more or less normal numbers of deaths, despite the pandemic.

In Slovakia, Lithuania and Bulgaria all (or almost all) regions have had normal levels of death. And even in hard-hit countries like Italy and France and Sweden considerable parts of the countries have had no excess deaths.

Select a region in Europe for the complete analysis:

Our analysis is based on data showing daily or weekly all-cause deaths in each region, which has been collated from Eurostat and national statistical agencies (UK: ONS, NRS and NISRA; Germany: Destatis; Spain: ISCIII; Netherlands: CBS)

We have gathered as geographically granular data as possible (mostly at the NUTS3 level), but in countries such as Germany and the UK only NUTS1 level data has been published, and in the Netherlands only NUTS2. A number of countries in Central and Eastern Europe have not reported any regional statistics on excess. These are excluded from this analysis.

Excess deaths have been calculated by comparing all deaths reported in a region since the start of the pandemic with the average number of deaths during that time period in the previous couple of years.

For most countries, the average period is 2015-2019. Others have fewer years of data available, but at least two full years have been used. Some, like Spain, have modelled the expected number of deaths for 2020 instead of providing historical figures.

This article on Newsworthy's Medium page.