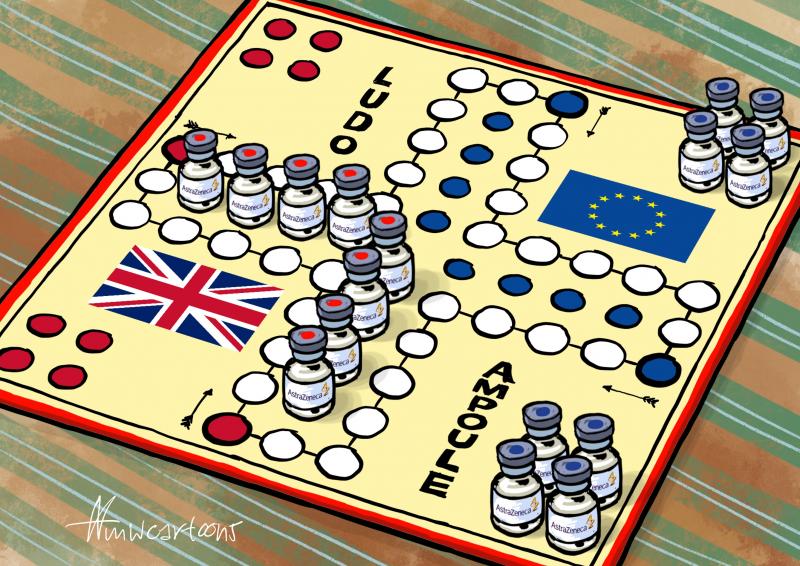 The clash between the EU and AstraZeneca over delayed vaccines has revealed a stack of questionable contracts signed with Big Pharma. Potential problems include manufacturers’ ambiguous delivery dates, and uncertainty about the immunisation schedule for the European population. Lawyers investigating the deals show that companies have a clear advantage over the EU.

The delay in distributing the Oxford vaccine to EU countries by AstraZeneca (holder of an exclusive production license) may result in a legal headache. The Anglo-Swedish company has denied allegations of breach of contract levelled by the European Commission, which has threatened legal action. Beyond the clear urgency of getting the European population vaccinated and out of the crisis (the main pillar in the EU’s case), it remains difficult to establish who is right and who is wrong. The clash revolves around technical disagreements that are difficult to interpret, especially since the version of the contract published on January 29 is heavily redacted. This was the same day that the vaccine was approved by the European Medicines Agency (EMA) and authorised for marketing by the EU Commission.

Over the last days, a partial truce has been reached: the Commission’s President, Ursula von der Leyen could do nothing else but rely on the goodwill announced by AstraZeneca and Pfizer to catch up.

Indeed, the only real certainty in the mishmash is the weak position in which the EU and the member states have placed themselves, taking high-margin financial risks and a less demanding attitude toward suppliers. This is the picture that emerges from the analysis conducted by lawyers specialised in the pharmaceutical sector. We asked them for an opinion on the agreements that have been declassified so far: those signed in August and November 2020 with AstraZeneca and the German Curevac respectively. Generally speaking, these assessments are also valid for the negotiations secretly concluded with other companies (Johnson & Johnson, Sanofi-GSK, Pfizer-Biontech, Moderna). Only delayed payments from the Commission and member states are immediately punishable, in contrast to delayed deliveries.

“The flexibilities granted to companies in the contracts aim to mitigate the uncertainties inherent in the enormous production effort required by the exceptional circumstances of the pandemic,” comments Colin McCall, partner of the international law firm Taylor Wessing, based in London. Clive Douglas, a lawyer and commercial mediator at Nexa Law (another UK law firm), takes a more critical stance. "In exchange for the participation in the expenses for the development of vaccines and the favorable conditions offered to companies, the EU should have reserved the right to negotiate for the entire duration of the contracts, in particular in the phase following the marketing authorisation, in order to agree on precise quantities and delivery dates, with related penalties and price reductions for non-compliance".

"According to the agreement with AstraZeneca (the same goes with Pfizer), governments had five days to join after being invited to be part of it," explains an anonymous source at the Commission. "Everyone opted in to avoid losing access to the vaccine, once it would be approved by the EMA”. In short, take it or leave it.

Another strategic mistake made by the negotiating team (led by Sandra Gallina, Director General of the Commission's Health Department, and consisting of the delegates from Italy, Germany, France, the Netherlands, Spain, Sweden, Poland) is having accepted a supply calendar divided by months or quarters. "Given the urgency of having the vaccines available as quickly as possible, a continuous distribution schedule with shorter intervals would have been preferable," says Douglas. "Surely the quarterly deliveries do not facilitate the vaccination campaign", confirms Guido Rasi, former Director of the EMA. Massimo Florio, Professor of Public Economics at the University of Milan, agrees: "Pharmaceutical companies may concentrate deliveries in large blocks, which can be difficult to manage for the health authorities, exceed storage capacity and compromise orderly administration".

The contracts signed with AstraZeneca and Curevac require precise payment in installments: an initial advance charged to the EU budget, a second advance paid by the member states and a final balance based on the doses assigned to each of them (proportionate to the population size). In the case of Curevac, the second installment, the one paid by national budgets, is due by the time when the request for approval is submitted to the EMA, meaning before being sure that sale of the vaccine is authorized.

Redacted sentences in the agreement with AstraZeneca, uncensored using Adobe Reader, indicate that the 870 million euro for the agreed 300 million doses is divided as follows: five days after the signature, the Commission paid two thirds of the initial investment of 336 million euros to accelerate production (the payment of the remaining share is subject to the delivery of a statement by the company). After that, national governments bear the costs of filling, packaging and distribution (amounts and deadlines are blackened out), and eventually pay for their individual doses.

If the Commission and Member States are late in paying, default interest and interruption of supplies are triggered at the discretion of the company. Another redacted clause allows AstraZeneca to increase the price (or simply cut the supply, if governments do not accept the price increase) of the 100 million additional doses that Member States are obliged to buy, should it consider that on July 1 2021 the pandemic is over.

"Under normal circumstances — that is, not in the current situation in which production infrastructure has to be quickly created from scratch and may run into possible glitches — a pharmaceutical supply contract would include penalties for non-delivery or delayed delivery within the agreed terms," ​​explains McCall. These clauses are totally absent in the contract with Curevac, which staggers the distribution by quarters. According to a report by the Italian newspaper Corriere della Sera, some forms of compensation (penalties or refunding) are required by the contract with Pfizer but only for late delivery of the doses foreseen for a given quarter. Pfizer can also avoid penalties with alternative solutions. Thus, the interruptions to deliveries in EU countries in recent weeks do not necessarily constitute an infringement by the US company.

The softball approach can also be seen in the contract with AstraZeneca: while the company may face payment interruptions if it fails to deliver by stipulated dates, it also has the power to unilaterally set and revise these dates during the execution of the contract. "Governments have the right to stop payments only for late delivery of the quantities as notified by the company, but not for failure to ship all the contractually agreed doses for a given month," says Douglas.

So, when AstraZeneca announced reducing the EU’s originally guaranteed 8 million doses for Q1 2021 to 3.4 million, it may not have constituted a direct infringement. To decide otherwise, it would be necessary for a judge to establish whether or not the company had kept its commitment to make the "best reasonable effort" to provide the promised doses. "Best reasonable effort" is a vague principle mentioned in the premise of the contract, described as “activities that a company of a similar size would undertake for development, production and marketing, considering the urgency of a vaccine to put an end to a pandemic”. Paradoxically, it is precisely this issue that both the President of the Commission, Ursula von der Leyen, and the CEO of AstraZeneca, Pascal Soriot, cling to in defence of their opposing theses.

McCall's interpretation appears to be in favor of AstraZeneca: "According to clause 5.1, the maximum reasonable effort to produce doses for the EU refers to the period following the marketing authorization". In such a scenario, the company may claim that it had no obligation to ensure sufficient production before receiving the green light by the EMA and the Commission, which both issued their positive decision just a few days ago.

According to Douglas, the situation is in fact even more complex. One only has to look at a series of specific provisions in the contract to decide whether AstraZeneca has made the best reasonable effort. First of all, the company stated that no agreement signed with third parties (including the United Kingdom, to which it has decided to give priority) would have prevented it from delivering the agreed doses to the EU in accordance within the estimated timeframe. Furthermore, the company is required to keep regular contacts with its counterparties to resolve any supply issue which may arise. Finally, if the company is no longer able to produce at a sufficient rate in its own factories (including the one in British territory), it should do everything possible to subcontract part of the production to factories potentially indicated by the Commission and the member states.

"To resolve the disagreement between the two parties in one direction or the other, it would be crucial to know when AstraZeneca first encountered the problem at one of its production sites and whether it informed the EU too late," Douglas points out. Digging out such evidence would require time that the EU cannot waste, while fighting around the clock against the ravages of coronavirus.

In its official statements the Commission said  that the Vaccine Strategy Steering Committee (including all Member States representatives) was not informed of the delays by AstraZeneca before the meeting held on 22 January.  We asked the company when it found out that they were in trouble, but we received no answer.

"When negotiating the contracts, the European Commission and the Member States should have put much more care in protecting the public interests with specific clauses giving responsibility to the companies in case of non-compliance,” argues Viviana Galli, Coordinator of the European Alliance for Responsible R&D and Affordable Medicines .“Apparently, they have been played by the companies which are used to negotiating and managed to get the best deals for themselves."

This article was part of the project "Who is cashing in on the Covid-19 pandemic" supported by Investigative Journalism for EU.