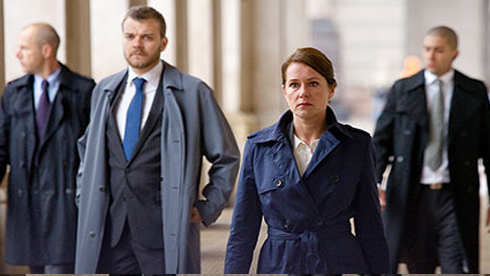 A small country with just 6 million inhabitants, Denmark is now a rising star in the world of television thanks to well-crafted series like “Borgen”. Developed by a production system that is unlike any other, the shows owe much of their success to the almost total freedom granted to screenwriters.

Looking for a new way to visit Copenhagen: you might consider following in the footsteps of Sarah Lund and Birgit Nyborg, heroines of the TV series The Killing and Borgen, on a tour mapped out by the city’s tourist office. Acclaimed by television audiences around the globe, and recognised by international awards, the series have suddenly turned a spotlight on the small northern European state and its 6 million inhabitants.

Both are Scandinavian in outlook, offering a sombre vision of low lying rainclouds, murders that hide sordid secrets, and internecine political strife. And all of this is rendered without special effects, convoluted plot twists or glamourous make-up, at a pace that is hardly frenetic. It is enough to puzzle the Americans, who have been in a rush to buy the rights and set about shooting remakes. In Denmark, the ratings have gone from strength to strength.

The third season of *The Killing*, currently being broadcast, is attracting an audience of 1.7 million every week. “Can you imagine that in France? A third of the population in front of the box?” remarks director Mikkel Serup.

The borderline asocial heroine of the story is a haggard ponytail-sporting cop, inspired by Clint Eastwood in *Dirty Harry. The actress who plays the part is welcomed like an ambassador when she travels abroad. Another phenomenal character is the main focus of Borgen,* which reveals the behind the scenes goings-on at Christiansborg, the seat of the Danish parliament, with its account of the life and times of Birgit Nyborg, who was elected prime minister a year before real-world social democrat leader Helle Thorning-Schmidt took the top post in the country’s parliament in October 2011.

In the UK, the devoted fans of Borgen included British Prime Minister David Cameron and Liberal Democrat leader Nick Clegg. Staying one step ahead, defying expectations, and captivating the public with hard-fought negotiations over the appointment of a European commissioner in Brussels: these are the primary ingredients for the success of this series and Danish fiction in general.

To understand how it has been achieved, you have to travel to Orestad, an eco-neighbourhood with a mix of residential buildings and business centres. Next to a waste ground where seagulls paddle, a flag emblazoned DR flutters over the Danemarks Radio building. This is where the editorial strategy for the country’s six public channels — which are free of advertising and solely financed by a TV license fee of €303 as opposed to €125 in France — has been developed.

On the third floor, three young women are chatting in a small glazed office, where they appear to be taking a coffee break. “That’s are our next big success,” someone whispers. Furnished only with a table, two chairs and a couch, this is the “writing room”. A few days earlier, it was the venue for the final meeting of the Borgen team, which decided on the last remaining details of the plot of the series whose third season is still in production.

Now, it is occupied by new trio of screenplay writers, a dream team working on The Legacy: after her death, the four children of a famous artist who have been separated by the twists and turns of her complicated life, come together to settle the issue of her inheritance.

In the office opposite, Borgen co-screenwriter Jeppe Gjervig Gram is devising narrative arcs for Follow the Money, a series that aims to turn the same spotlight on the inner workings of finance that Borgen turned on the world of politics. Once the general plot has been mapped out, he will be joined by two screenwriters who will work with him on the episodes. At DR, three is the golden rule: three writers, and three seasons per series. More than that and the alchemy refuses to work.

“Would you like to know our trade secret?” asks Borgen producer Camilla Hammerich, who then waves in the direction of the coffee machine... Reading between the lines, it is a matter of giving the masterminds free rein. “It is a dynamic. The conversation is always ongoing. It’s as if we were juggling and keeping the ball in the air,” confirms Mada Dul Larsen, who has just escaped from the "writing room" and the meeting on *The Legacy*. At DR, the screenwriters work at home. They are paid a salary by the channel, not only when they are writing but also when they are researching the background to their stories.

Years of trial and error have enabled the Danes to perfect this model which is now the envy of screenwriters across Europe. “Up until the 1990s, we only broadcasted boring stuff shot by in-house cameramen,” remarks Camilla Hammerich. “Our television was just ticking over. Filmmakers thought it mediocre and and stayed away.” It was Camilla’s half-brother, filmmaker Rumle Hammerich, who put an end to the lethargy. Appointed to head DR’s fiction department in 1992, he immediately sought inspiration in a trip to the United States.

On his return to Denmark, he set about breaking down barriers between the small and the big screen: calling on the services of the most daring directors and the best known cameramen, graduates of the national Film School in Copenhagen, where Lars Von Trier, Bille August, Thomas Vinterberg, Susanne Bier (who won an Oscar for Revenge in 2011) and Nicolas Winding Refn, the maker of Drive, started out.

“The screenwriters are at the top of the pyramid, and the producers have free rein to choose the best possible crew without having to work with a particular actor or editor”, points out Camilla Hammerich. There is only one constraint, which relates to DR’s mission as a public service: an obligation to propose a story with a dual reading that will enlighten the public about a contemporary issue. The Killing, for example, cleverly interlaces police investigation with political intrigue. Better still, the third season focuses on the impact of the financial crisis.

On October 29, Piv Bernth, DR’s current head of fiction, travelled to Oslo to take part in a seminar devoted to the Danish model.

Other participants were astounded at the freedom given to screenwriters. No pressure from the network? None whatsoever. Not even a little curiosity? Advice? No. “The artist’s vision has to be dominant. Once we have given a green light to a project, we stay out of the way. That is the key to our model,” explains Piv Bernth. “It is not one that will work for commercial channels, which are nervous about audiences.”

Critically, no politicians have dared to take issue with DR’s editorial choices. However, the same cannot be said for the Danish journalists and political communications consultants, who surprisingly lambasted Borgen when it first went on the air.

Too improbable, they said. Even the centre-left weekly Politiken was critical in its judgement. Nonetheless, a year later a poll of its readers showed that Borgen was their favourite programme. At the same time, a tax fraud scandal involving a former prime minister’s spin-doctor prompted a national debate on the extensive role played by opinion makers.

The secret of Danish television serials is their ability to keep the viewer breathless during the twenty episodes that comprise a season. This differs from the stand-alone episodes in US serials in which "there is always a murderer per episode. Everything is wrapped up in 45 minutes," explains Søren Sveistrup, the main screenwriter for The Killing, in an interview to the Jyllands-Posten. "I'm getting tired of these high-heeled detectives who take care of an autopsy in the coroner's office before solving a murder then going out on a date. There is no danger," says Sveistrup, despite his strong diet of English-language programmes.

In the first season of The Killing, it took 20 episodes to find out who killed Nanna Birk Larsen. After the Danes, German viewers stayed with the show to the end (it is a German-Danish coproduction), followed by Norwegian and Swedish viewers. Borgen, sold in 64 countries, is just as successful.