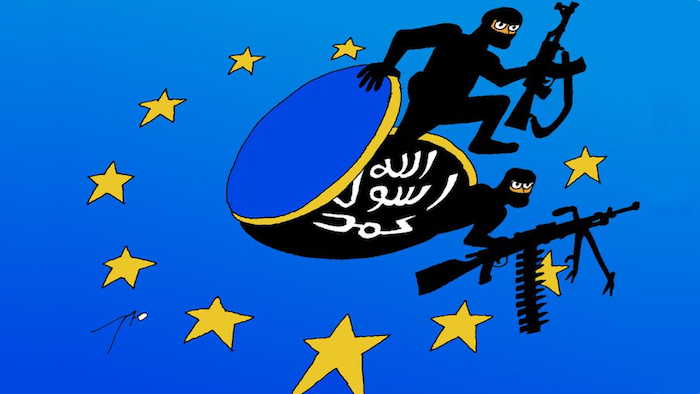 Europe is unarmed against jihadists

The lack of information-sharing and of a common European intelligence has meant French and Belgian authorities were unable to prevent the Paris killings.

After January's attacks against Charlie Hebdo and a kosher supermarket, which left 17 dead, France thought it had lived its 9/11, a new kind of attack dragging the country into a spiral of solidarity and retaliation. The outpouring of national and international solidarity that followed and the strengthening of security and surveillance measures had given cause to hope that the potential followers of the Kouachi brothers and of Amedy Coulibaly would give up in the face of the cohesion and determination of the French people not to surrender to panic.

As we know, it did not go this way. In the aftermath of January's attacks, experts were already warning that strengthening the security measures and the military operation against Islamic State (IS) would have not been enough and that new attacks were likely. “The question is not if, but when”, they said. The adoption at the beginning of May of a new surveillance law, a “French-style Patriot Act”, was not sufficient to avoid the slaughters of 13 November.

In a televised comment, much circulated on social networks, the former head of the anti-terrorism section of Paris’ criminal court, Marc Trévidic, explained that “the jihadists we arrested after the attack on Charlie only said one thing: IS dreams about attacking France. One of them even said that they had asked him to attack during a concert”. What’s more, according to Trévidic, “IS has many, too many people” ready to commit suicide bombings in France: “Even if some of them fail, there will be others ready to go ahead, because, unlike Al Qaeda, IS has the possibility to ‘waste’ its personnel”.

Trévidic, also rather critical towards the law on surveillance, added that by now “IS has an impressive capacity for development because for three years it has been allowed to grow undisturbed. The result: it has become incredibly powerful; and when a terrorist group is powerful, it exports itself. Al Qaeda was an example of this. It's the same old story: you let a monster grow and then complain when it runs riot.”

##The battle has just begun##

The judge adds that “for ten years nothing has been done to counter jihadist propaganda and recruitment on the internet, in prisons, in mosques.” In addition, Trévidic says, it is difficult to counter because “we are friends of people – Saudi Arabia, Qatar – who support the same Wahhabi ideology as the terrorists and we do business with them.”

So what will happen now? According to Trévidic, “for five to six months IS will observe our reactions and the measures we will take, hoping for an iron fist against the Muslim community so that it will radicalize even more”, since, he says, the strategy of Islamic State “is to push Muslims to revolt”.

It is an analysis [shared](http://www.franceinter.fr/video-jean-pierre-filiu-ce-qu-ils-veulent-ce-sont-des-represailles-ils-veulent-qu-on-tue-des) by historian Jean-Pierre Filiu, an expert in the field, who argues that terrorists want “reprisals against Muslims. They want civil war in France”.

Filiu denounces the West’s short memory, stating that “after *Charlie* and the kosher supermarket, we thought it was over, but in reality the conflict has just begun. And everything they are now doing works: they are imposing their agenda onto the entire world. Since spring 2014 – before the proclamation of the caliphate in Iraq, the heart of IS – there were some French citizens who wanted to destabilize France, who aimed at sparking civil war”.

But French society is still very sympathetic, and rather than splitting after the Paris attacks, it stood with the victims and their families. The divisions that could be heard here and there after the massacre at *Charlie Hebdo* did not occur, the dissenting voices and the “Je ne suis pas *Charlie*”s that signalled an attempt to distance themselves from the newspaper's ferociously anti-religious and desecrating positions.

Probably because this time the victims were chosen arbitrarily (there were even Muslims among them) and are more representative of a whole generation – open cosmopolitan urban youth – than specific targets, attacked because of their ideas and actions, as Islam specialist Gilles Kepel recently [pointed out](http://www.lemonde.fr/idees/article/2015/11/14/gilles-kepel-l-etat-islamique-cherche-a-declencher-la-guerre-civile-en-france_4809962_3232.html). Even if many among the more than five million French Muslims feel discriminated or stigmatized at home, it is clear that they would rather live in this France, for some at the price of feeling like second-class citizens, than under the Caliphate.

It is interesting in this respect to note that, compared to January's attacks, the religious aspect has almost not been invoked, and not by chance: *Charlie* had been a target because it was considered blasphemous. [IS’ statement](http://www.vox.com/2015/11/14/9734794/isis-claim-paris-statement) on the 13 November attacks is more focused on the “crusader nations”, France and Germany, both engaged one way or another in Iraq and “attack[ing] Muslims in the lands of the Caliphate”, and on the “pagans gathered for a concert of prostitution and vice”.

It is on the basis of this new cohesion that on 16 November French president François Hollande could [request](http://www.reuters.com/article/2015/11/16/france-shootings-hollande-spending-idUSP6N0ZI00W20151116) that parliament reform the constitution in order to better adapt to the long-term war against terrorism and [announce](http://www.lefigaro.fr/politique/le-scan/decryptages/2015/11/16/25003-20151116ARTFIG00309-pour-son-pacte-de-securite-hollande-fait-son-marche-chez-les-autres-partis.php) a “security pact”, also prompted by Conservative opposition.

On that occasion Hollande also announced the recourse, for the first time since it was introduced in the European treaties, to [article 42.7](http://eur-lex.europa.eu/legal-content/EN/TXT/HTML/?uri=CELEX:12012M/TXT&from=IT), which states that “if a Member State is the victim of armed aggression on its territory, the other Member States shall have towards it an obligation of aid and assistance by all the means in their power” (the equivalent of article 5 on mutual assistance of the [NATO treaty](http://www.nato.int/cps/fr/natohq/official_texts_17120.htm?selectedLocale=en)).

It is about communicating the message that if France is affected, the whole Union is affected: Hollande, therefore, decided to take at his word anyone who, in Europe, expressed solidarity with Paris in the aftermath of the attacks and to suggest common policies against IS.

So on 17 November French defense minister Jean-Yves Le Drian officially made the request to his European Union colleagues, who [accepted](https://euobserver.com/foreign/131151) it unanimously. However, as Contexte [underlines](https://www.contexte.com/article/attentats-de-paris/apres-les-attentats-a-paris-la-france-reclame-du-concret-aux-europeens_47591.html), “in Brussels nobody knows exactly how concretely the procedure works, which has never been used, nor what type of concrete support European partners can provide to France. The hypothesis goes from logistics to intelligence to tactical support on the ground”.

United in the face of the terrorist threat, Europeans also decided to put in place “coordinated and systematic” controls at the Union's borders, to finally set up a European database of passenger data (the so-called Passenger name record, PNR) and to strengthen exchange between intelligence services.

And it is exactly these last points that have been under discussion for years within European institutions and between the capitals of the twenty-eight member states – which retain the bulk of security powers – and Brussels.

As Le Monde [points out](http://www.lemonde.fr/attaques-a-paris/article/2015/11/17/antiterrorisme-les-rates-de-la-coordination-europeenne_4811901_4809495.html), the European Parliament wants privacy protection to come first. Therefore, it is in favor of data exchanges on transnational acts – those committed by a same person in different countries – but not of data on acts committed in a single country. Only the single states can decide to share these data with their partners. What is more, the national databases are not interconnected “, thus limiting their effectiveness in the face of transnational criminal networks”. As [denounced](http://www.voxeurop.eu/en/content/blog/4912766-europe-does-not-have-means-fight-jihadists-its-own-territory) months ago by terrorism expert Loretta Napoleoni, “Europe has not the means to fight the jihadists on its territory”.

What makes the picture even darker is the additional fact that [Europol](www.europol.europa.eu), the European police agency, does not have a proper anti-terrorism unit able to coordinate the activities of the intelligence services, by centralizing and spreading the information that are forwarded to it: its creation, which has been for years coming, will occur [in 2016](http://www.eubusiness.com/news-eu/attacks.10xy/) “in the best-case scenario”.

It is exactly the lack of coordination among the European intelligence services that seems to have played an important role in the success of Paris’ attacks: according to a high-level Turkish official [interviewed](http://www.aljazeera.com/news/2015/11/turkey-france-paris-attacker-151116162755424.html) by Al Jazeera, Ankara had forwarded to France the name of Omar Ismail Mostefai, one of Paris’ gunmen, last December and then again in June, but the French authorities had not followed up on the information. By the same token, the Associated Press [revealed](http://bigstory.ap.org/article/c9302b053f23414ea41ae48287a823d0/ap-newsbreak-iraq-warned-attacks-paris-assault)that some high-ranking Iraqi officials had warned France of the imminence of an attack in Paris, planned in Raqqa, in Syria, and carried out by a sleeper cell.

Maybe the most striking example of the consequences of the lack of coordination among intelligence and police services is the escape of Salah Abdeslam, brother of one of the Paris suicide bombers: after allegedly taking part in the shootings he was helped by two friends who had come from Brussels to fetch him up. On their way back their car was stopped [three times](http://www.sudinfo.be/1425376/article/2015-11-17/l-incroyable-recit-du-retour-de-salah-abdeslam-a-bruxelles-apres-les-attentats-d) by French police, and every time it was allowed to leave again, as Abdeslam only had petty crimes on his record. Some hours later he was declared public enemy number one and now is Europe's most wanted man.