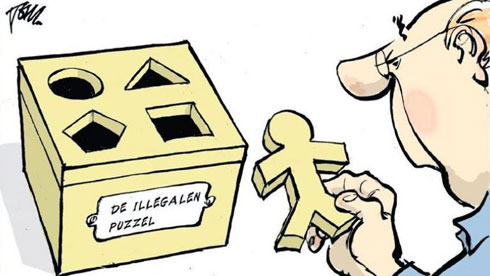 Europe must open its borders

Europe must immediately open its borders to refugees fleeing the hell of Syria. If the EU believes it can prevent asylum-seekers trying to get here by any means, it’s deluding itself.

Syria has become a hell for journalists, notes Reporters Without Borders following the abduction of two Swedish journalists. But it’s not just a hell for the journalists. During the past two years, more than 2.2 million people have fled the civil war in the country.

The images, like the stories, are appalling. A hell. Wounded, dead. People who have been gassed, others who have seen their family members murdered or severely beaten.

Among the victims identified since the start of the unrest in March 2011, more than 11,000 have been children. According to a British report, most of them were killed by bombs or shelling; 389 were shot by snipers, 764 were executed and more than 100 were tortured. Women have been been assaulted, raped, and used as human shields.

New struggles often lie in wait for those who manage to escape the country. Some end up in overcrowded refugee camps in the neighbouring countries – Turkey, Lebanon, Iraq and Jordan – lacking food and water. Others try to reach Europe, often Sweden, by venturing across the Mediterranean, risking their lives on barely seaworthy boats, as we saw this autumn. The testimonies are terrifying: overloaded boats, families broken up, smugglers who extort money from and brutalise the passengers.

As of today, the [[member countries of the EU have only let in slightly more than 40,000 Syrian refugees. However, more and more of them are trying to get into Europe]]. On a visit to Bulgaria, the Director of the Office of the High Commissioner for Refugees (UNHCR) of the United Nations reported that it was essential that the European countries not close their borders and that they provide the necessary aid to [the refugees].

This is not what we are seeing, however – far from it. Greece, Bulgaria and Italy, for example, are illegally pushing back Syrian nationals. When the passengers of a boat that had begun to sink after having been shelled by the Libyan army tried to summon the Italian sea rescue service, they were told to call Malta instead, and the rescue boats took a few more hours than necessary to arrive on the scene. A total of 268 lives could have been saved.

When the leaders of the EU gathered in October in the wake of terrible shipwreck that had just occurred off the coast of Lampedusa, migration policy was the order of the day. The leaders were able to agree on only one thing: that the subject would have to be debated at their next meetings, in December and then in June. The urgent question of the means to be deployed to save lives and improve the situation in the camps, for example on Lampedusa, was put off until a later date. However, the situation in Lampedusa remains untenable. In November the UNHCR revealed that the camp, built to host 250 people, was holding 700. Decisions are being dragged out. Meanwhile, the refugees cannot work and the children are not going to school.

As Sweden is the only member state of the EU issuing permanent residence permits, many Syrians are trying to get there. Many are unaccompanied minors. [[Today, the refugees have few legal channels for getting to Sweden and so they often have no choice but to approach smugglers]].

This week, [Sweden’s] Svenska Dagbladet published a story about a family that had managed to get into Sweden on a tourist visa but was not allowed to stay there. As the visa had been issued in Austria, it was back to Austria – in accordance with the Dublin regulation – that they were to be deported, and in Austria where their asylum application had to be processed. The family wanted to do the right thing, but they got it wrong.

If Syrian refugees are not immediately given the possibility to travel to Sweden through legal channels, the (relative) generosity of Sweden may leave them with an aftertaste that will be, at the least, bitter. European leaders should know that effective patrolling of the borders is an illusion. That is why they must be opened without delay, to take in refugees fleeing the hell of Syria.