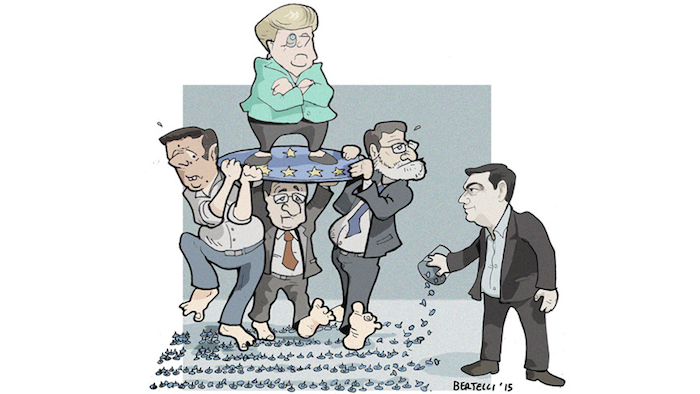 Eurozone leaders are gathering in Brussels on Tuesday evening to resume discussions on the financial situation in Greece. The European press wonders whether they will even be able to talk to each other after Greeks overwhelmingly said “no” to the previous bailout plan.

“This evening the 19 Eurozone countries leaders will face Grexit”, writes Jurek Kuczkiewicz in the Brussels daily: “they will have to decide whether Greece will remain in the eurozone and this will inevitably lead to questions about whether it should stay within the EU”. “Today”, adds Kuczkiewicz –

It’s not VAT or the pension reform that are at stake. It’s not the debt nor the cult of financial austerity. It’s even not the morals according to which those who spent too much should pay back their debts. Greece is on the brink of financial collapse – and it could be inevitable at this point – that will trigger serious problems and will bring the Greek people’s resentment of Europe to a level hard to come back from. […] Tonight the nineteen European leaders – including Tsipras – will have to move beyond finger pointing about who is right and who is wrong, and will have to find the right words to say where the common good lies – if there still is any. And sometimes it exists only because true leaders have been able to locate it.

Columnist Markus Bernath tries to answer the fundamental question of the moment: “How will things be, moving forward?” The most plausible outcome for him is that, given the deepening economic crisis, a new bailout would require more austerity than the one Tsipras could have had in June. Still, Bernath writes, “Tsipras still thinks he can have a better agreement”:

The Greek referendum is a confusing revolt against Europe. [The No-voices in Greece] want respect, equal treatment in the EU, economic help, no recession and to keep the Euro. But if there is no deal, some might not care; even the return to the Drachma isn’t scary anymore.

Today the Greek PM Tsipras will meet his EU colleagues in Brussels. De Volkskrant wonders how both parties can reach out to each other. One of the options for the EU would be to oust the eurogroup president Jeroen Dijsselbloem –

New brooms sweep clean. However for the European negotiators it is more difficult to sacrifice people than it is for the Greeks. The real fire-eater is the German finance minister Wolfgang Schäuble, but the euro countries can’t force national politicians to resign. Jean-Claude Juncker, who openly campaigned for a Greek yes, has only just become president of the European Commission. President Draghi of the European Central Bank isn’t politically responsible. That leaves Jeroen Dijsselbloem. […] For many Greeks he is the bogeyman and the face of the unwillingness in Brussels to reach out to the Greeks.

Columnist Enric Juliana echoes in the Barcelona daily the turmoil within European institutions, after the referendum in Greece and the possibility that Spanish Economy minister Luis De Guindos will replace Jeroen Dijsselbloem as Eurogroup chief –

The European leadership’s political defeat in the Greek referendum leaves the Eurogroup president, Dutchman Jeroen Dijsselbloem, badly hurt, as he was percieved as the hardliner’s voice. Spanish ministers have been aspiring to Dijsselbloem’s job for months – it was a promise made by Angela Merkel to Spanish PM Mariano Rajoy before the 2014 European elections – but Dijsselbloem refuses to quit. If the Greeks have sacrificed Yanis Varoufaikis, the Eurogroup could end up suggesting the Dutch Finance minister should leave.

The European elites mishandled the Greek crisis which ended with a major defeat for Europe, writes political scientist Tomasz Grzegorz Grosse in Rzeczpospolita. In his opinion, the crisis undermined the EU’s geopolitical position and highlighted the structural imbalances in the eurozone ­–

The Greek crisis has dismantled dreams about European power. The most important consequence of the current turmoil is a defeat of the monetary union as a geopolitical project […]. The way the crisis is being solved discredits pro-European elites, particularly those from the richest EU countries. Mostly because creditors hid their ad hoc interests under the cover of clichés and forgot about European solidarity. Instead they laid down harsh conditions which could not be refused […]

“We have reached the point when it would be much better for all concerned to end the madness and negotiate an orderly exit for Greece from the European single currency”, says the London daily, according to which –

Like marriages and commercial partnerships, what seemed a good idea at the time sadly sometimes turns out to be a contract made in hell. In those circumstances the best answer is to accept reality and move on. In the case of Greece, it is difficult to avoid the conclusion that at least one of the parties – the Syriza government – has been guilty of unreasonable behaviour. Negotiating a deal with European partners and then recommending in a surprise referendum that the deal be rejected destroyed trust. As in a marriage, things are difficult to repair in such an atmosphere. To extend the analogy, the Greeks have been abusing the joint current account they hold with 18 other nations for some years now, and the others’ patience has run out – understandably. While we sympathise with the plight of the Greek people, their government is doing them no favours.