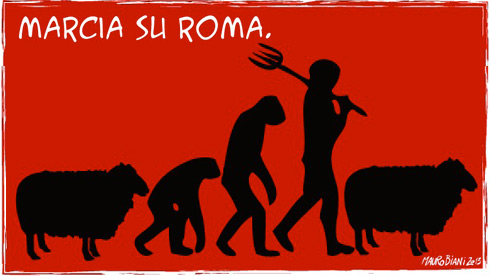 Fascism at the end of a pitchfork

The “Forconi movement” – meaning pitchfork waving protesters – that has been paralysing Italian cities for days has taken almost everyone by surprise. But their non-partisan protests against austerity and elites hide echoes of the start of Mussolini's authoritarianism.

Aristocrats who roll up in Jaguars, and peasants. Bosses, and unemployed workers. Truckers in the crosshairs of Equitalia [Italy’s tax collection agency], new ideologues of fascism, and young people from left-leaning social centres. Supporters and ex-sympathisers of the Northern League and Beppe Grillo. Former members of the Democratic Party (PD) and critics of its new national secretary Matteo Renzi. Rank-and-file union members and former members of the Italian General Confederation of Labour (GCIL, left). Opponents of the tax authorities and Venetian separatists. Immigrants and hooligans.

The “Forconi movement” currently sweeping Italy from north to south is an outpouring of lava, a bubbling cauldron of acronyms and emblems from politics, the trade unions and various protest movements. It has no clearly defined political stripe, no central coordination and no charismatic leader to carry it onwards. In sum, it is not rational, but “spontaneous”, as argued by most of its representatives. The figures presumed to be leading it have become known by now. One is Danilo Calvani, a former gardener. Another is Lucio Chiavegato, a carpenter from Verona and head of Life Veneto [an association of small businesses close to the Northern League]. But every day there emerge new ones, coming up like mushrooms. And they act without a rational reason, without an ideology: some threaten to burn books in Savona [the North], like Hitler in May 1933, while others plan to organise a mock hanging at Loreto Square in Milan, fashioned after the hanging of the Duce, Benito Mussolini.

[[Broad-based and non-political membership are the watchwords of this curious form of protest that seems to have overtaken even the leader of the Five Star Movement, Beppe Grillo]]. They have no common steering body. Supporters of the extreme right, under orders to sing solely the national anthem, find themselves alongside young tifosi who sing songs hostile to the police. They should have been in Rome on the day the vote of confidence [in Prime Minister Enrico Letta] was held, on December 11, but because of organisational problems they had to put off the “march” for a few more days.

From Piedmont to Puglia via Veneto comes a tsunami that has neither head nor tail and that, to believe the boldest historical parallels, shares some similarities to the Wars of the Vendée that raged in France at the time of the Revolution. The Chouans consisted of a compact nucleus of provincial nobles, monarchists, and Catholic traditionalists. Here there are business leaders who had to shut down their shops due to the economic crisis, like in the Vercelli region [of Piedmont], where many farms have turned out for the demonstrations, owners and employees both.

There are also small entrepreneurs who appear on the lists of Equitalia, those same lists that drove so many of their colleagues to suicide. And then there are the children of the recession: according to the OECD, the rate of youth unemployment in Italy jumped from 40.05 per cent in September to 41.2 per cent in October. “The people are determined, and we have been attracting more and more during the demonstrations. [[All the social strata are turning out: doctors, the unemployed, workers on unemployment benefits]]. The people who get up at four in the morning and who go home at 10pm and who, at the end of the month, are unable to make ends meet because they no longer have a penny in their pocket”, says Luca Taddei of the Coordinamento 9 dicembre (December 9 Collective), which supports the Forconi demonstrations.

The difficulty lies in stopping the most extreme agitators, the infiltrators. Turin, for example, a city that, as some parliamentarians recall, has historically been the cradle of protest movements radicalised in the 1970s by the Red Brigades. These are above all the political groups that want to infiltrate the ranks of the Forconi. Matteo Salvini, new Secretary of the Northern League [populist] was carried in triumph to the Pirellone [the seat of the regional Government of Lombardy, in Milan] by the Cobas del latte [members of the independent Union of Dairy Farmers].

In a style like that of Beppe Grillo, he asked the police to “take off [their] helmets and [to] join the people” in the street. Silvio Berlusconi, leader of Forza Italia, who was to meet a delegation of lorry drivers in Rome, decided to postpone the meeting.