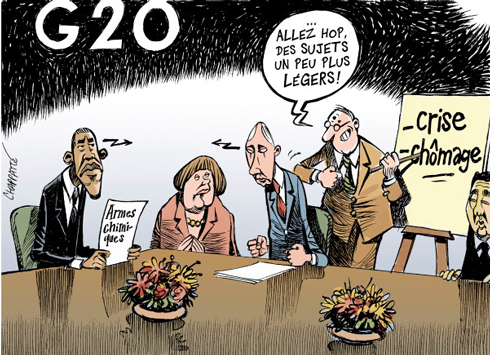 On US President Barack Obama’s folder: chemical weapons
"Right, let's move on to some lighter subjects?"
On the flipchart: crisis, unemployment

The G20 group of nations meeting opened on September 5 in the Russian city of St Petersburg amid a delicate political situation with Washington, its allies and Moscow all disagreeing on the issue of military intervention in Syria.

The greatest problem should in contrast be the handling of the ongoing economic crisis, which was the original theme of the summit: according to Le Monde,

The leaders of the world's 20 largest economies will make an undertaking in the event's final statement, to make every effort to commit themselves to move to a system of automatic information exchange for tax purposes beginning in 2015.