Report Referendum in Hungary on EU refugee relocation
'Let's send to Brussels a message it can understand!' – A government billboard for the 2 October referendum. 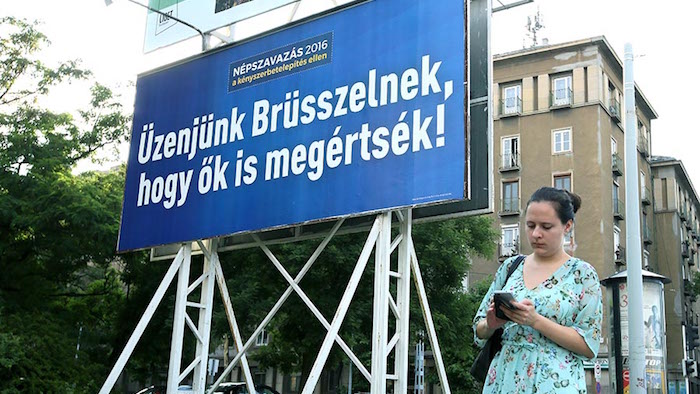 Government steps up its “no” campaign

On 2 October, Hungary will vote on a EU refugee distribution scheme. The government, who is calling on the population to reject the Commission's proposal, recently stepped up a taxpayer-funded campaign many say is xenophobic and fear-mongering.

'Let's send to Brussels a message it can understand!' – A government billboard for the 2 October referendum.

With a few days to go before Hungary’s referendum on EU refugee quotas, the government’s anti-immigration campaign is intensifying, recently drawing on even more aggressive language, exaggerations and misinformation.

The government of Prime Minister Viktor Orban, of the right-wing Fidesz party, urges citizens to vote “no” on October 2 to the question, “Do you want the European Union to prescribe the mandatory settlement of non-Hungarian citizens in Hungary even without the consent of Parliament?”

A new brochure, which has been sent to 4.1 million households and urging people to vote against quotas, is the latest element of vigorous, taxpayer-funded campaign that draws on billboards, as well as radio, print and television ads.

“We must stop Brussels,” the brochure reads, according to a translation by the Budapest Beacon. “If we don’t take action, in a couple of decades we won’t recognize Europe.”

“The booklet contains distorted facts about Europe’s refugee crisis, portraying asylum seekers and migrants as dangerous to Europe’s future,” Lydia Gall, a researcher on eastern Europe and western Balkans at Human Rights Watch writes. She calls the ads and brochure a “government-sponsored disinformation campaign”, saying it has cost a total of 16 million euros.

Because of the campaign, the government has been accused of xenophobia and fear mongering, although a spokesperson rejected these accusations.

“People all over the EU sense that something wrong is happening with migration,” Zoltan Kovacs told BBC News. “What is happening is out of control.”

“Brussels, instead of stopping the people’s migration, plans the further settlement of tens of thousands of migrants,” the new brochure reads, adding: “Only we Hungarians can decide with whom we would like to live.”

Under the European scheme, which is based on the size of the population and GDP, with corrective factors based on the average number of asylum applications per 1 million inhabitants and on the unemployment rate, Hungary is asked to take in a total of 1.294 migrants relocated from Italy and Greece.

The plan is one of the Commission’s responses to the global refugee crisis, during which Germany took in more than one million people in 2015. Most came through the so called “Balkan trail”: from Greece, migrants head north to Hungary, and then through Austria to Germany. Since a controversial deal with Turkey, the numbers along this route dropped significantly, but fears of the agreement collapsing remain.

But Hungary still feels the emotional toll of last year, when thousands crossed the country – sometimes on foot – to reach the next border. Hungary has already erected a border fence as well as stepped up its border-control units.

In one local newspaper, a full-page ad called to reject the European scheme on “self-pride day” for the “protection of the Hungarian homeland”, the Budapest Beacon reported.

In the brochure, the Hungarian government claims that, “the Paris and Brussels attacks proved that there is a very close relationship between immigration and terrorism.” A poster asks, “Did you know that the Paris terror attacks were carried out by immigrants?”

Among the 10 assailants of the November 13 attacks in Paris, two posed as refugees to enter Europe through Greece. Most grew up in France or Belgium.

On another page, the booklet claims that “several hundred ‘no-go’ zones” which “the authorities are unable to keep under their control” exist in European cities “where immigrants live in great numbers.” Stories pointing to such areas, first circulated by the American broadcaster Fox News, have been met with criticism in Europe, and were prominently debunked by several city officials in France and Great Britain.

As a response to the campaign, the satirical “Two-Tailed Dog”](http://mkkp.hu/wordpress/) party started its own billboard campaign, the BBC reported. Its ads are caricaturing the wording of the government’s questions, asking questions like “Did you know there's a war in Syria?” and “Did you know a tree might fall on your head?”.

But opinion polls suggest the country strongly favours the government’s position and that Hungary is likely to reject the relocation plan. Facing an uphill battle, several opposition groups therefore called on the population to boycott the vote: to be valid, at least least half of the roughly 8 million eligible voters need to participate.