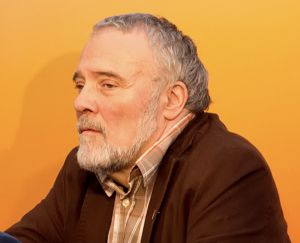 György Dalos is a Hungarian writer and historian. Born in Budapest in 1943, he now lives in Vienna. In his native country he was accused of “Maoist activities” and temporarily banned from working or publishing, and in 1977 he became one of the co-founders of Hungary’s democratic opposition movement. In 2010 he was awarded the Leipzig Book Prize for European Understanding. His novels and other prose works have been translated into more than ten languages.