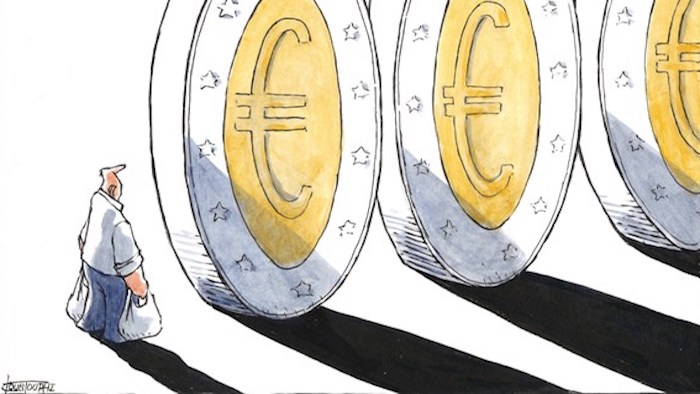 How to set up a universal basic income for all Europeans

Belgian Economist François Denuit suggests introducing the euro-dividend as a new pillar of social rights on which member states could build up their own basic income policies. A big leap forward towards building a truly and ambitious Social Europe.

A month ago, following a public consultation involving more than 16,500 participants drawn from civil society, the European Commission made public its reflection on the social dimension of the European Union (EU) and adopted a recommendation in favour of a “European pillar of social rights”. While we should applaud the willingness of the institution and its president, Jean-Claude Juncker, to re-engage with its right of initiative in social affairs, this proposal must be accompanied by other initiatives if the Commission hopes to meet its aim of a “social triple A” for the EU. A systematic support for national social protection systems in the form of a euro-dividend could offer a complementary and ambitious way to address current social, economic and political issues.

In the follow-up to its white paper on the future of European integration, the Commission published its reflection on the EU’s social dimension. It sets out the current social landscape and the change factors leading up to 2025, then evaluates the different possible scenarios for social integration.
The analysis presents a disparate image, where different socio-economic indicators reflect that the “convergence machine” that was the EU has gone into reverse. Employment rates, poverty rates and public expenditure spent on social protection policies (in terms of the proportion of the budget allocated, sources of financing, the degree of coverage for different risks, the role of social dialogue) are marked by significant disparities between Member States. The crisis and the insufficient responses to it have deepened these divergences and have particularly affected people on the most modest incomes. Let us remember that, overall, almost a quarter of the EU’s population is at risk of poverty or social exclusion, one fifth of young people is unemployed in the eurozone, and the salary difference between men and women is still above 16 percent.
The Commission also identifies new risks relating to the ageing population, the evolution of family structures and the labour market. On this final point, for example, the combined effects of technological progress, the globalisation of trade, and the growth in the service sector impact the quality of jobs available, job security, working conditions and the sustainability of social protection models. The “new social question” implies, according to the Commission, rethinking access to lifelong learning programmes, access to work and the distribution of working hours, access to a decent income, and modernising social security systems. If not, we may see inequalities increase further, precarity worsen, and new forms of social exclusion develop.
While the differences between Member States are substantial, these challenges are common to all. The Commission therefore identifies three possible scenarios for the future of European integration on social matters: 1) social policies are an exclusively national competence, and their European dimension is restricted to freedom of movement; 2) Member States eager for deepened integration use “reinforced cooperation” to harmonise their social policies; and 3) the whole of the EU 27 deepens its integration on social matters, develops a legislative arsenal and redistribution capacities in order to guarantee social rights for all European citizens. Although the Commission is happy to start the debate and leave up it to Member States, it nevertheless insists on the need, from both a social and economic perspective, to establish a society capable of offering real opportunities to everyone and on the political imperative to restore confidence in the European project.

It is within this framework that the Commission has proposed a European pillar of social rights, made up of twenty core principles organised into three parts: equality of life chances and access to the labour market, equitable working conditions, and social protection and integration. The Commission’s proposition, formulated as a recommendation, does not have any legally binding force. It is about inciting Member States to adopt a certain number of principles and to encourage the coordination of national policies. Moreover, the pillar is conceived as a priority for eurozone countries, acting as a ‘compass’ to re-establish the process of convergence. Other countries are free to adopt it or should no doubt aim to do so if they wish to join the monetary union.
By making the euro the main area of focus, the Commission seems to give more importance to its economic objectives over any social dimension. It is clear that these excessive social imbalances, just like excessive economic imbalances, threaten the viability of the monetary union and the credibility of the European project. Perhaps the spectre of a multi-speed Europe is raised for strategic reasons, or perhaps it indicates the direction to be taken by future initiatives for the integration of the eurozone. However, it seems difficult to speak of “social rights” while creating two categories of EU citizens; and the economic imperative therefore seems to win out. While the process of macro-economic reform (the European Semester) has already succeeded in absorbing social questions into its procedures in the name of reinforcing budgetary discipline, we are therefore entitled to ask whether the pillar in fact aims to give a new legitimacy to neoliberal formulas for Europe’s “new economic governance” by adding new social indicators to its dashboard.
Moreover, the pillar of social rights aims to make “more visible, more understandable and more explicit” the rights and principles already present in Europe’s social apparatus. From a symbolic point of view, the initiative gives substance to European citizenship, in the same way as the European Charter of Fundamental Rights. But in the absence of judicial obligations, the pillar risks being limited to a “repackaging” of existing principles without any meaningful impact.
Time will tell if it will lead to real progress, or simply to a placebo effect. But despite its obvious weakness, the pillar of social rights presents a considerable opportunity to widen the debate by advancing other daring propositions for a “social Europe”.

A euro-dividend for all Europeans

A universal basic income given unconditionally to all Europeans (both citizens and legal residents) could therefore become the political instrument for a Europe that protects and reconciles citizens with the European ideal. The philosopher Philippe Van Parijs and the political scientist Yannick Vanderborght speak of a ‘euro dividend’, because this allowance represents a dividend on the wealth produced by European integration. The idea is also championed by the European movement Unconditional Basic Income Europe (UBIE).
The euro-dividend would be distributed to all residents of EU Member States on an individual basis, without means-testing or a requirement for Member States to match the distributed funds. As a modest sum (with projections at around €200 a month according to the financing model and its possible adjustment to the cost of living in each country), it does not aim to replace national minimum income schemes. It provides a basic income upon which Member States can construct their own social arrangements in order to ensure all their citizens enjoy a decent life.
Many schools of thought help justify the introduction of a basic income. For liberal egalitarians, it serves to articulate individual autonomy and the equitable distribution of resources in order to ensure everyone has “real” freedom (beyond the simple right to access certain opportunities, it would mean providing everyone with the real means to follow their life goals). For the civic-minded, it ensures every citizen has the possibility to participate fully in social and political life without discrimination. Political ecologists regard it as a way of starting the transition towards a post-growth society that favours individual emancipation and the development of autonomous activities that respect the environment.

Despite the modest nature of the proposal, the euro-dividend would make a significant step towards these different objectives. It could equally bring together different positions favourable to the European project. Federalists, fighting Europe-wide social and redistributive mechanisms, would see it as the materialisation of European social citizenship, while intergovernmentalists, for whom the preservation of a model of national solidarity is paramount, would take it as a non-intrusive tool capable of reinforcing national goals for social justice.

Its introduction would above all constitute an intelligent way to serve the ambitions of the European pillar of social rights. It would improve the lives of the most deprived citizens who would have access to an unconditional income to complement support provided by national social security models, without administrative burdens or the risk of social stigmatisation. It would provide a solidarity mechanism in the form of transnational transfers, reducing the excessive economic and social imbalances between eurozone members thanks to its automatic stabilising effect. The significant reduction in the factors leading to economic migration within the EU, which would avoid the negative effect of a brain drain in certain countries, could represent a supplementary advantage. Finally, and above all, it would have a beneficial effect on the EU’s legitimacy and popular support for the European project.

The euro-dividend could be financed by a European VAT or a partial reallocation of the European Social Fund, for example. Other sources can also be considered (a European carbon tax, a tax on financial transactions…), but in the longer term, the ideal would undoubtedly be to reduce the problem of fiscal dumping at its source and to ensure an equitable redistribution of the wealth generated by European integration. The proposal can equally be introduced as a priority in the eurozone and be implemented in different ways, by reserving it exclusively for children or young people, for example.
The practical dimensions must be subject to debate, but what matters is that the financing depends on the EU’s own resources, in order to establish a clear link between the EU budget and its advantages for European citizens. The introduction of a euro-dividend aims to develop a just, stable and effective European social model, because this income represents Europe’s engagement in supporting social citizenship with a policy at a European level that is transparent and easy to administer.
The road from the European pillar of social rights to a European basic income is unquestionably still long. But if politics is the art of the possible and of persuasion, the time has come to propose an ambitious social Europe.