Hungary’s toxic sludge spill is now threatening to pollute the Danube. For the European press, the ecological disaster highlights the need for greater European regulation of industry. 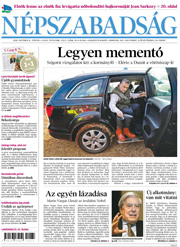 Nothing can be done to save Kolontár. On a visit to the village worst-hit by the toxic sludge which spilled from a breached alumina plant reservoir, Hungarian Prime Minister Viktor Orbán declared the area uninhabitable and pledged to build a memorial — a proposal that features on the front page of Népszabadság.

Like much of the Hungarian press, the daily seeks to establish responsibility for the disaster which took place on 5 October. At least five people were killed and 150 injured by the toxic tide that swept from the Ajkai refinery. Magyar Nemzet reports that “a Deputy Secretary of State for Environmental Affairs is also a former local inspector with responsibility for monitoring of the plant. Just two weeks ago, the official in question signed a document describing the contents of the reservoir as ‘non-toxic’”.

“The red poison has reached Danube, and will affect the rest of Romania by Tuesday,” announces an alarmed Adevărul. However, the seriousness of the situation does not prevent the Bucharest daily from publishing an ironic piece — “Hungary-Romania level score for disasters” — which compares the spill to the Baia Mare disaster in 2000. The Romanian accident resulted in the leakage of 100,000 m3 of toxic waster water into Hungarian and Romanian rivers, while the Ajkai spill has released approximately one million cubic metres of waste into the Danube river basin.

The front page of Jurnalul naţional insists that “Lessons should be learned” from the latest catastrophe. The Bucharest newspaper wants Romanian authorities “to do more to prevent incidents in their own country, and to outlaw antiquated technologies which are tantamount to a refusal to live in the 21st century. Currently available technologies and compliance with EU legislation would reduce the risk of such accidents by 99%.” The state and civil societies, argues the daily, “should oblige investors to ensure effective measures for their prevention.”

An ominous report in Die Presse warns that we will face more environmental emergencies particularly in Central and Eastern Europe — two regions which the Viennese daily claims are littered with “environmental time bombs.” The newspaper blames pre-1989 industrial development for the many plants that “continue to make use of environmentally unsound technologies, and dangerous waste storage facilities." In times past, “the alumina from bauxite processed at Ajka was sent to the Soviet Union to be transformed into aluminium, and subsequently re-imported. Hungary bore the brunt of the environmental risks and that is still the case today.”

Die Presse lists 21 sites, including several Soviet-era airports, which now present major safety hazards. Ajka was only ranked in 12th position on this blacklist, which also features, an even more dangerous waste reservoir in Oradea, western Romania. The installation forms part of aluminium plant that was initially closed after the fall of the Berlin Wall, but later sold to a Russian investor who went bankrupt in 2006. Local authorities have yet to address the significant risks posed by the plant which is now abandoned.

“When faced with disasters on such a scale, we immediately turn to the European Union,” remarks De Standaard, “and this is a largely positive reflex, because awareness of how much we depend on each other is an effective force for European integration.”

However, the Flemish daily argues that “there are major loopholes in European legislation, which is increasingly influenced by powerful industrial lobbies. All too often, the interests of the majority only become the priority in the wake of a disaster.”

It is for this reason that national and European authorities should be more vigilant in their application of safety standards. In a context “where the citizens of the Europe are often ambivalent in their attitudes to the EU, many hearts and mind can be rallied to the cause if Brussels shows itself to be an effective guardian of the public interest.”