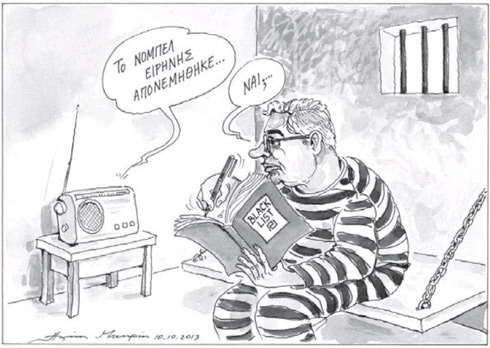 – And the Nobel Peace Prize is awarded to…
– Yes…?

The 2013 Nobel Peace Prize was awarded on October 11 to the international group the Organisation for the Prohibition of Chemical Weapons (OPCW) in tribute to “its extensive efforts to eliminate chemical weapons,” according to a press release from the Norwegian Nobel Committee.

The organisation, which has 189 member countries, is based in The Hague, continues De Volkskrant.

Meanwhile, the leader of the Greek neo-Nazi Golden Dawn party, Nikos Michaloliakos, has been held in jail since October 3, after the judicial crackdown against his party, which is now considered “a criminal organisation”.