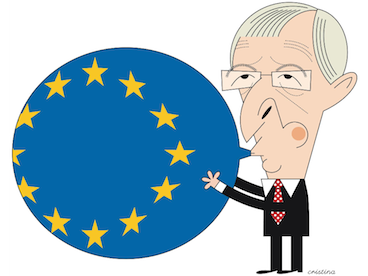 “If he was out to convince that something could change in the way Europe is led, than the European Commission’s president-elect Jean-Claude Juncker has already won,” [writes Le Monde] in the eve of his team’s hearing before the European Parliament. According to the Parisian daily, the former prime minister of Luxembourg almost convinced the correspondents who attended his first press conference that “he has learned from the mistakes made notably by his predecessor,” the outgoing Commission president José Manuel Barroso, which have led to “a crisis of confidence” and “the rise of anti-European movements”. The paper adds that —

One can be sure that consultants and spin doctors were mobilised throughout the summer to refine a project – and a discourse – that above all had to be as different from Barroso’s exhausted approach as possible.
His team, described as “‘winning’” and “‘ready to give new impetus’ to European integration”, is the Union’s “last chance”, Juncker said. Aware that the institution he is about to lead is “confronted by the urgent need to change its image and the way it functions”, Juncker —
did not repeat the harshest critics of European bureaucracy, its privileges and its sometimes megalomaniacal desire to regulate everything. If they were to look carefully at the sketch he has drawn, the players in the Brussels bubble would understand that one era has reached its end and that another may be dawning, where omnipotence and arrogance might give way to true effectiveness and modesty.
In what the paper calls “something completely new”, this efficiency is entrusted to the first vice-president, Dutch Social-Democrat Frans Timmermans, who —
will make sure any future Commission proposal is really necessary. He will judge whether each objective would be better achieved by member states. It’s the return of the subsidiarity principle the most Eurosceptic countries are asking.
Le Monde recalls that, from 29 September to 7 October, the commissioners-designate will have to pass a hearing before the European Parliament, where MEPs are “eager to confront them with front of their contradictions”. A step that Juncker should not be afraid of taking —
he knows Parliament cannot reject a commission candidate without rejecting the entire Commission. But nobody, except the Eurosceptics, is ready to stir an institutional crisis. Especially as the Parliament sees Juncker as an ally capable of helping it to reduce the powers of the Council – meaning the member states. Nonetheless, the Commission, with a more centralised power, with a true “executive” vice-president and other vice-presidents from “small” countries who will have control over French, British and German commissioners, will have to prove its effectiveness. And the profile and functions of some commissioners will be questioned. […] Will they be vetoed? The president says he “trusts” the members of his team and the governments that have nominated them. But he supposes that he will not enter into a fight with the Parliament. Meaning that those who are problematic will have to be replaced.