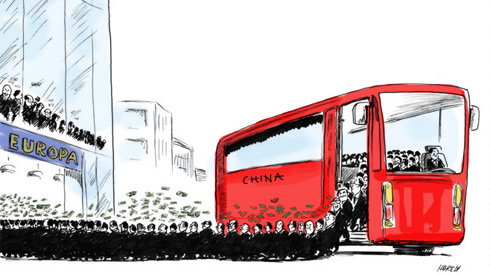 Latvian visa coveted by the Chinese

Since 2010, the Riga authorities have been giving out residence permits to foreigners seeking to invest in the local economy. Many Chinese have taken up the offer and bought properties, allowing them access through the door to Europe.

Is Latvia – a small Baltic country of two million people, EU member since 2004 and in the Schengen area since 2007 – becoming an entry gate for the Chinese into Europe? Since a law on immigration was passed in 2010, residence permits in Latvia – and therefore in the rest of the EU – can be given to foreigners who invest in the Latvian economy or who buy up real estate.

In most European countries, a few Chinese would go unnoticed. But Latvia is not an immigration country. The hundreds of Chinese who have arrived since 2010 are raising many questions, and the questions have reached Parliament.

In the first eight months by 2013, they numbered 235, or 10 per cent of the total number of foreigners asking for a residence permit. In comparison with 2012, the number of real estate deals closed by Chinese citizens in Riga have gone up by a factor of eight in the first eight months of 2013. These statistics indicate that only one in four of its Chinese clients would consider living in Latvia itself. The rest rent out the apartment they have bought and move on.

The Latvian company Baltic Cotton Road offers assistance to Chinese people eager to settle in the Baltic country. On its website, it makes plain the deal on offer: "Buy a property in Latvia, receive a five-year residence permit and travel freely throughout Europe".

The property owner can thus travel throughout the Schengen area without a visa, while Baltic Cotton Road proposes to manage their assets on their behalf. [[The permit can be available within a month and the property must be worth between €70,000 and €140,000, depending on the region]]. Other companies are offering similar services for what is being presented as the best investment to get into Europe.

For the Latvian Government, the move is meant to support the real estate sector, where prices have collapsed. Latvia, hit violently and prematurely by the 2008 crisis, has received emergency aid from the European Commission and the International Monetary Fund.

After having pursued a policy of drastic austerity, which stabilised the economy, Prime Minister Valdis Dombrovskis has got his country back on the path to growth. Nonetheless, he resigned together with the rest of his government on November 27 after accepting political and moral responsibility for the collapse of a store in the suburbs of Riga that killed 54 people on November 21. The cause of the collapse have yet to be established.

Mr Dombrovskis was also criticised within his own coalition in recent months, notably by nationalist politicians who wanted to change the law on residence permits in exchange for their support for the vote on the 2014 budget.