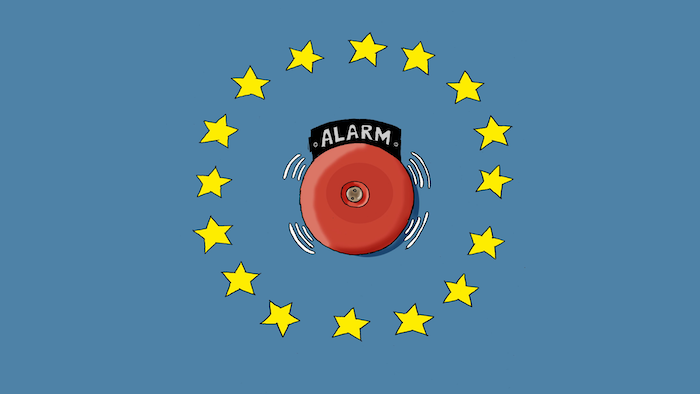 As the anniversary of the signature of the EU's founding treaties is approaching, a group of over 300 European academics and personalities are endorsing this appeal to relaunch European integration and inviting civil society, academia, young people and citizens to participate to the March for Europe in Rome on March 25.

25 March 2017 is the day of the 60th anniversary of the Rome Treaties which have made the EU project the most successful experiment of peace and integration ever.

This date may go down history as yet another self-praising, boring, closed-door party of 27 EU leaders or as the germ of a first conscious, popular and patriotic European manifestation. A March for Europe – mimicking the one that took place in London in the aftermath of the Brexit vote – has been announced by the Union of European Federalists. Unfortunately, only the usual suspects - a few pro-European organisations – are behind this one-in-a-generation opportunity to show how many citizens of Europe support and share its ideals, values and lifestyles. Despite its high-potential in prompting a genuine, pan-European manifestation calling for a renewal of the EU project through an inclusive, constituent process, the risk that it may reveal a flop is dangerously high.

See you in Rome on 25 March. Help us spread the call below through the hashtag #MarchForEurope2017!

A genuine European Union to ensure welfare, security and democracy

We European citizens are worried and scared. The economic and financial crisis has impoverished many of us. Youth unemployment risks creating a lost generation. Inequality grows and social cohesion is in peril. The EU is surrounded by war and instability from Ukraine to Turkey, the Middle East and North Africa. The flux of refugees and migrants has become a structural feature we must address together, in a human and forward-looking manner. In many Member states we witness authoritarian tendencies and the rise of nationalist and xenophobic forces. Democracy and the core values of the European modern civilisation are under attack. The EU itself is questioned, although it ensured peace, democracy and welfare for decades.

We European citizens don’t want our national politicians to care only about their next local or national election. They ask for European solutions to European problems but then they act to render those solutions impossible or ineffective. They disregard sensible Commission proposals or fail to implement decisions already taken , including when agreed by all. They claim, one day, for Europe to do something and protest, the following day, Europe’s proposed actions.

We ask national politicians and the media to stop depicting integration as a zero-sum game, thus pitting nations against one another. In an interdependent world no nation can satisfy all of its citizens’ basic needs and appeals for social justice. In this context, integration and supranational government is a positive-sum game. Our European social model based on liberal democracy and a social market economy can only survive in a multi-level framework of government, on the basis of the subsidiarity principle.

We European citizens are aware that globalisation is transforming the world. We need a European government to foster our common values and contribute to the solution of the global problems threatening humanity. The world needs an outward-looking cosmopolitan Europe to help build a more effective and democratic global governance to cope with climate change, peace, global poverty, and the transition to an environmentally and socially sustainable economy.

We European citizens recognise the EU as an incomplete Res Publica. It has a ridiculous budget (0.9 percent of GDP) and no financial autonomy from Member states, while its current competences are out of date for what is necessary to successfully answer the challenges of the current crises. It has a federal like legislative, judiciary and central bank. But democracy is the possibility for citizens to choose the government and make it accountable. For the Union to work and be democratic its decisions, including budget, foreign and defence policy, and the reform of the Treaties, should primarily be taken by a qualified majority representing the majority will of European citizens and states. The Commission should evolve into a fully-fledged government, setting and promoting a political agenda legitimated through elections. European parties should present their candidates to the Presidency at the European election.

The alternative is a directly elected President of the EU merging the Presidencies of the Commission and the European Council.

On 14 February 1984 the European Parliament adopted the Draft Treaty establishing the European Union, the so-called Spinelli Project, pointing towards a political union, which Member states disregarded. On 14 February 2017 we call upon the European Parliament, the only directly elected body of the EU, to take a new initiative to kick-start the EU on strengthened democratic basis. Talking about banking, fiscal, economic, energy, security, defence and political unions makes sense only within a genuine democratic European Union, with all those policies under a European government.

On 25 March 2017 the Heads of state and government will celebrate the Treaties of Rome establishing the European Economic Community and Euratom in 1957. We call upon them to match the vision of the Founders. They should open the way to the re-foundation of the EU on the basis of the European Parliament proposal, and immediately exploit all the Lisbon Treaties’ instruments to strengthen EU institutions and policies, especially on foreign and security, economic and social policies.

We call upon the Europe’s youth, its civil society, workers, entrepreneurs, academia, local governments and European citizens to participate in the March for Europe in Rome on 25 March. Together we shall give the political leaders the strength and courage to push forward the EU to a new beginning. European unity is key to solve our common problems, safeguard our values and ensure our welfare, security and democracy.

This Appeal was drafted by Roberto Castaldi with Giuliano Amato, Yves Bertoncini, Stefan Collignon, Anthony Giddens, Ulrike Guérot, and Miguel Maduro. It is available in various languages for further adhesions at March for Europe with the list of signatures and the info on the March.